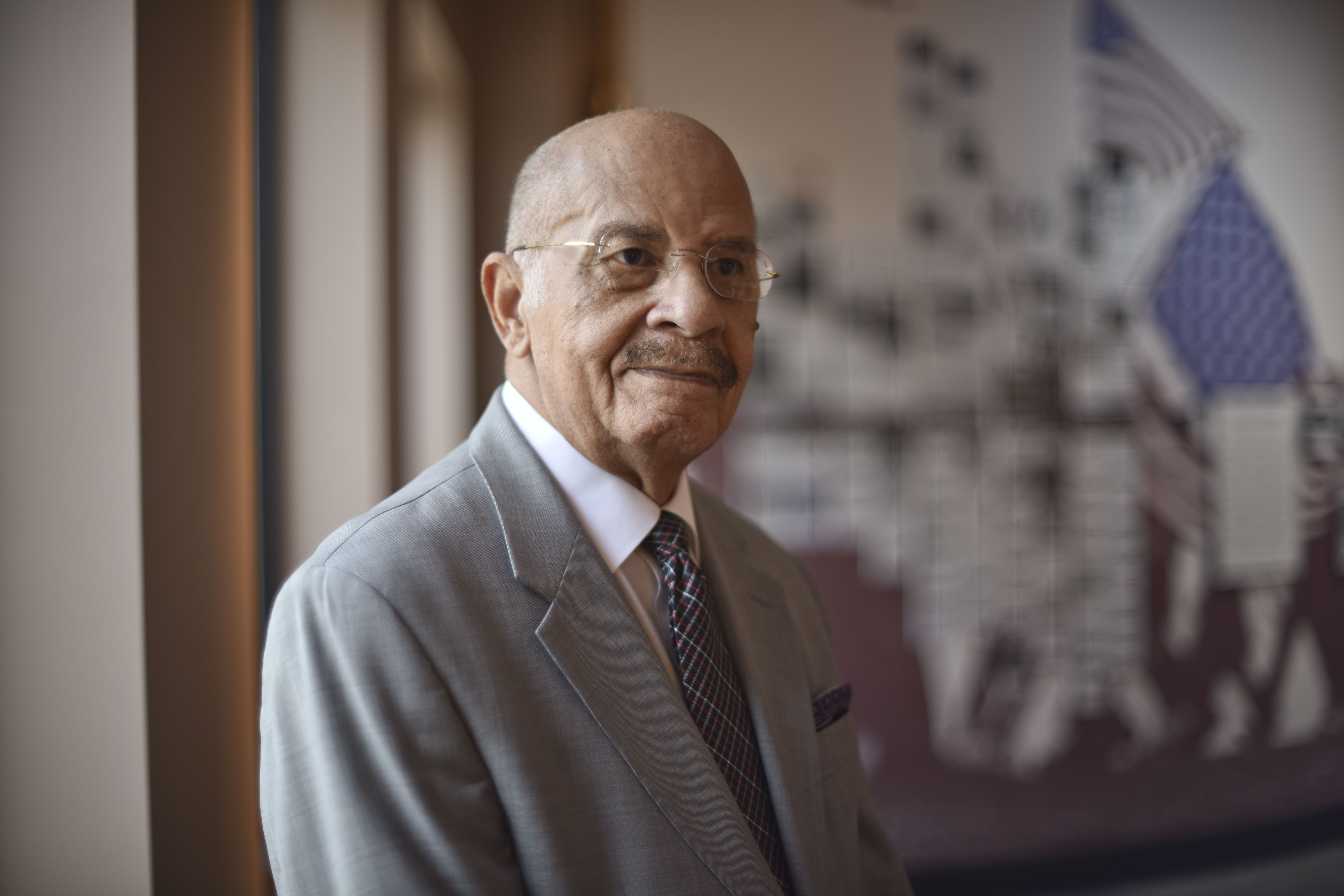 If anyone knows how to assess the performance of a chief executive in the city of Birmingham, it’s Richard Arrington. The former mayor, the first black politician to hold that office, knows firsthand what it means to govern in Alabama’s largest city. He also knows, from close proximity, William Bell’s career, first as a city councilman, later as interim mayor, and finally as the elected mayor whose term will officially end on Nov. 28, 2017.

When Arrington left office in 1999—after 20 years as mayor—he expressed a clear preference that then-City Council President Bell succeed him and appointed Bell interim mayor. Bell, however, was unable to hold off a challenge from City Council Member Bernard Kincaid, who was eventually elected mayor.

Arrington has been, not surprisingly, a careful observer of Bell’s time in office. Asked how he would assess Bell’s tenure at City Hall, Arrington was measured.

“I think I would grade it moderate, … moderate to good,” he said. “There have been some disappointments in his earlier run for mayor and his failure to run an effective campaign against Mayor Kincaid, particularly given the background he had, having been on the council for some time.”

“I think his later times, he did quite well,” Arrington said. “He was not able in the last term to develop a good working relationship with the Birmingham City Council. That was a bit disappointing, but I don’t want to attribute that mainly to him. Much of it I attribute to five council members who were very much opposed to anything that the mayor did. I think they made it difficult for him to accomplish some things. … They constantly hammered the mayor, and I think that worked against developing a good working relationship with the city council.”

Early in Bell’s tenure, he left an impression on Arrington.

“Well, I have always felt that Mayor Bell was the kind of politician that you had to put a load on him and make him pull it,” Arrington said. “When I left office, the business community representatives met with me … and inquired about Mayor Bell’s ability. I said to them, ‘I don’t necessarily think he’s done all he can do as a council member, but I think he’s the kind of person who if you put the load on him he’ll pull it.’ That’s the way I think he has responded. Given the bigger task as mayor, I think he has responded well. He’s made some good contributions to the city.”

Those contributions include how Bell has sustained the city’s tax base “which I think is very, very important,” Arrington said.

“What I notice is that with many cities, especially those that undergo political change, racial change, the tax base evaporates, the services decline, and things of that sort. That has not happened under William Bell’s leadership. He has maintained the services. He’s maintained a good tax base with some moderate job growth. It’s not been as good as the region, but it’s been good.

“He had some moderate economic development that I think is very, very helpful to the city and helps to create what the city needs — what I call the image of a viable city, rather than a city that’s dying. I give him credit for that.”

Arrington, in an earlier communication, gave Bell credit for halting white flight from the city, which had happened under earlier administrations, including Arrington’s.

It appears to have slowed under Bell’s tenure, the former mayor said: “I don’t think it’s all been reversed, but I think he’s put a halt to it with the investments that developers are making in housing, middle-income housing, condominiums, and so forth in this city.”

“They attract middle-class people back into the city, and with middle-class people comes additional tax base support because they make more money. There’s greater wealth with them, so they contribute to the city’s tax base,” Arrington said. “That disturbs some people I’ve talked with because they worry about what they call gentrification. But I think it’s a positive sign.”

Arrington said he wrestled with how to halt white flight for two decades.

“It’s very, very difficult to do because they look at many things. They look at schools, crime, a whole lot of things. I had to wrestle with that,” he said. “I think what Bell’s been able to do, especially in this last term, is to begin to attract some white citizens back into the city. I think it’s reflected in the development of middle-income housing. I just believe that any city that’s going to survive economically has got to know where the wealth is and among which citizens. And you’ve got to maintain some of those citizens if your city is going to be a viable city.”

Bell, 68, began his first full four-year term as mayor in 2013. In late-2009, he won a special election to replace former Mayor Larry Langford following Langford’s federal conviction. Then in 2011, he won a shortened two-year term that was abbreviated to align with the mayor and council elections.

Arrington is among those who believe Birmingham is better off now than when Bell took office as mayor: “He came into office on the heels of Mayor Langford, [who] was a very good PR person, but I’m not sure he accomplished very much.”

Langford, a former journalist and longtime politician, went from the Birmingham City Council to mayor of Fairfield to the Jefferson County Commission to the Birmingham mayor’s office — and was known for big initiatives. Langford’s imprisonment in 2010 left many of his ideas for Birmingham on the drawing board or otherwise incomplete.

“I attended a ceremony where he [Langford] was breaking ground for the new stadium, and the stadium never went up,” Arrington said. “He had good ideas. The CrossPlex was Langford’s idea, but it was actually built during Bell’s administration. So, I think William made some contributions. … People, particularly in the minority or black community, were very excited about Mayor Langford, [who ended up not accomplishing much of his agenda]. And Bell accomplished some of those things.”

Stumbles in the Neighborhoods

On the other hand, Arrington said criticism of Bell’s lack of success in neighborhood issues was at least partly correct.

“I think some of it is deserved, but not all of it,” he said. “I think part of what the mayor has to do is get the citizens to understand the tax base. I think he got a sort of negative image as somebody who had a lot of security around him and things of that sort. I think he could have avoided that.

“But you look at neighborhood services and what a mayor can do. He maintained police protection. He maintained public services, picking up the garbage. I don’t know exactly what was done about street repairs, but that’s something that’s never fully fulfilled. He had good fire and emergency protection. … I look at other cities that are declining, and they can’t provide those services. That’s when a city first starts to decline; they can’t provide adequate protection, adequate services in the neighborhood. I think the mayor [took care of those things] but got no credit for it because we’re also facing a problem in our low-income neighborhoods, where housing is declining. … There’s a limit to how much the city can do in that situation.”

“So, I think some of the criticism of the mayor was justified. I think did some things in the neighborhoods: he started tearing down housing and cleaning lots. I don’t know why it took him a while to do that,” Arrington said, noting that some criticized Bell for waiting until election time.

“Nevertheless, he had begun to do it. I think he ought to get credit for it, even if he might have been a little late moving on some of those things.”

Birmingham’s violent crime rate also served as a source of criticism for Bell’s administration. Is that fair?

“I think it’s been fair. I guess it’s been just,” Arrington said, adding that “there’s much blame to go around.”

“I think a mayor has to get the community, the neighborhoods to play a big role in fighting crime. The crime situation in Birmingham is not good at all, but I don’t blame the police department for that,” he said. “l just happen to believe, [based on] my time in public service, that people in the neighborhoods usually know who the problems are, they know who is pushing drugs in their community, they know who is stealing, and many of them don’t pick up the phone and even anonymously inform police officers until it hits them. We’re not going to solve the crime problem until neighborhoods decide that they’re going to fight the criminals and force the criminals out. Pick up the phone and call.

As a whole, Bell has reason to feel good about his time as mayor, Arrington said.

“I’ve said that to him since he lost. I said I thought he did a good job as mayor. The mayor is chief administrator, and I thought he was a pretty good administrator. But, you know, they say the buck stops somewhere,” Arrington said laughing. “It stops at the mayor’s desk.”