There was a time, not so long ago, that obesity was considered a sign of health, wealth, and beauty.  It is widely known today that this is not the case.  Obesity has many dangerous side effects such as high blood pressure, diabetes, and heart disease.  At no other time in history has obesity been as widespread as it is right now.

More than 70 percent of Americans struggle with weight that they find impossible to take off.  It is the biggest medical epidemic that we face today.

A 2005 Centers for Disease Control study estimated that approximately 112,000 deaths are associated with obesity each year in the United States, making obesity the second leading contributor to premature death.  (That’s the equivalent of a jetliner full of 300 people crashing every day.)

Obesity is simply fatness in a degree higher than being overweight. The energy intake coming from food is stored as fat because the body does not use it.

Why? What is the reason for this spike in obesity?  Is it lifestyle?  Is it laziness?  Do we just not care about ourselves anymore?  What is the problem?

Obesity occurs when a person intakes higher amounts of food, which do not burn and is stored as fat in the body. Obesity can greatly have an adverse impact on a person’s health. It may even have a worse effect on a person’s mental health.

Nationwide, the rate of obesity has tripled in just the past 20 years.

Obesity is a leading preventable cause of death worldwide, with increasing prevalence in adults and children, and authorities view it as one of the most serious public health problems of the 21st century.

Think of it this way: statistics tell us that for every 20 people reading this column, at least two will die because of a completely preventable illness related to overweight or obesity. Because of overweight or obesity, two of you will spend less time pursuing your dreams, serving in your communities, and enjoying your children and grandchildren.

An unprecedented number of children are carrying excess body weight. That excess weight significantly increases our kids’ risk factors for a range of health problems, including diabetes, heart disease, asthma, and emotional and mental health problems.

Our children did not create this problem. Adults did. Adults increased the portion size of children’s meals, developed the games and television that children find spellbinding, and chose the sedentary lifestyles that our children emulate. So adults must take the lead in solving this problem.

The amount of obese people in the world is currently estimated at being approximately one billion, which is a phenomenal statistic, so where did it all go wrong and how have we become this way, over the years.

We now use computers more than ever before, the internet starts taking over television as the most popular sitting down activity ever. We now have an abundance of machines that we can use at home that don’t involve much moving about, PlayStations, X-Boxes, etc.

People use e-mail in organizations rather than talking to their colleagues or getting up to speak to them, we can now use phones anywhere we want to and see and talk to people for hours and hours, where ever we are, and will be mostly doing this while we are sitting down.

The big problem is with all of this is that due to all of the industrialization that we have around us, we tend to think that we should just go everywhere in our cars. Rather than walking or buying fresh produce, we have let ourselves become a bit too comfortable with our lives and relying on technology to do everything for us so in the long run we tend to do less rather than more.

Walking briskly for just an hour a day is enough to cut the effect of tendencies toward obesity, according to new research.

As we attempt to get our kids to make healthy choices, we should not forget that we need to make them for ourselves.

James Baldwin captured the essence of this when he said: “Children have never been good at listening to their elders, but they have never failed to imitate them.”

Glenn Ellis, is a Health Advocacy Communications Specialist. He is the author of Which Doctor? and Information is the Best Medicine. For more good health information, visit: www.glennellis.com 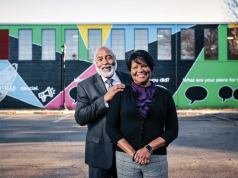