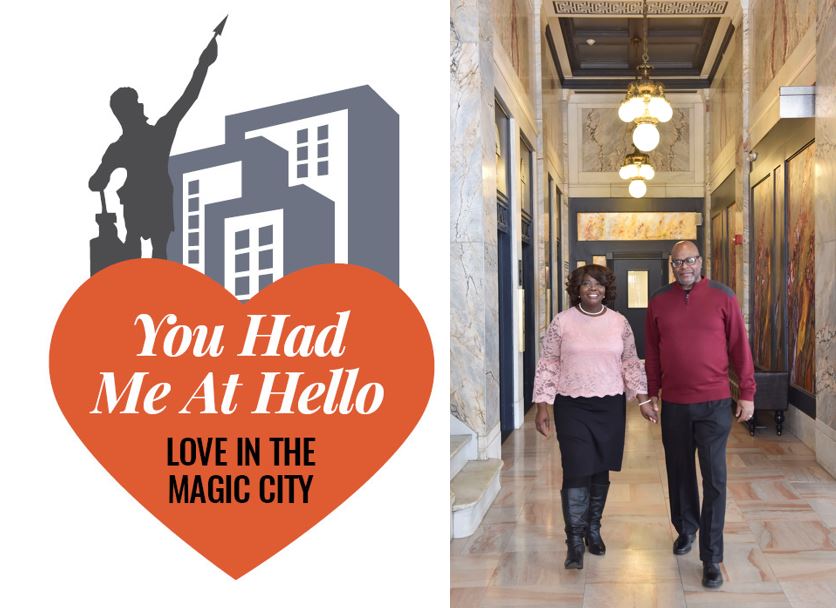 Photos by Frank Couch at the Elyton Hotel

“You Had Me at Hello” highlights married couples and the love that binds them. If you would like to be considered for a future profile, please send nominations to Ariel Worthy at aworthy@birminghamtimes.com. Include the couple’s name, contact number and what makes their love story unique.

Met: A mutual friend arranged for Patricia and Ira to meet during an Auburn University football game in November 2014. Patricia didn’t know the two had been “set up” until she discovered that her seat was next to Ira’s. During the game, it started to rain. Ira offered to buy ponchos and hot chocolate for them. When he did, Patricia thought, “Hmmm, he may be all right.’’ Ira and Patricia were at the game to see their mutual friend’s husband present an award at halftime. Ira had planned to leave the game after halftime. But because he was having such a good conversation with Patricia, he didn’t leave until after the game.  “We talked about the goodness of God,’’ Patricia said. “I didn’t know he was a minister until we exchanged business cards at the end of the game.’’ The two agreed to meet for lunch the next Friday. They talked every day after that.

The proposal:  Ira surprised Patricia with a ring and a proposal in June 2016.

The wedding: They went to church the morning of Sept. 4, 2016. After church, they exchanged vows at a friend’s church in Dadeville, Ala. Patricia wore a new burgundy dress and new burgundy shoes. Ira wore a burgundy suit. Ira teases Patricia that she was trying to match him.

“Once we got married, we stopped and got a sandwich from Subway,’’ Patricia said. “Then, we went to an afternoon service at Ira’s sister’s church to celebrate her pastor’s church anniversary.’’

They celebrated their union with a special reception in November 2016.

Words of wisdom: “Don’t let the small things be a stumbling block or blow up into something huge in your marriage,’’ Patricia said. “Find ways to fix the little things, if you can, by looking at the man in the mirror.’’

Happily ever after: Patricia is a Jefferson County circuit court judge in Domestic Relations Court. Ira is a pastor and a retired maintenance supervisor. They have a blended family of five children, six grandchildren and one grandchild on the way.