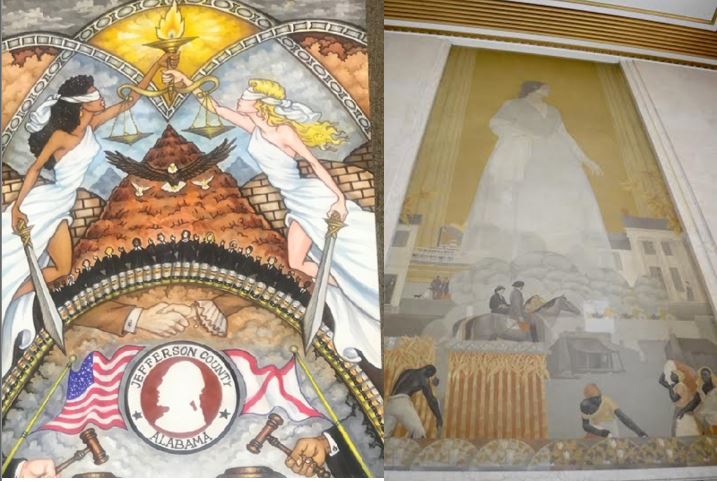 After much discussion and debate a new mural will be added to the downtown Jefferson County Courthouse lobby that include depictions of multiracial judges, a pair of blind justices and an eagle, which represents America.

The “Justice in Blind” mural, which counters the controversial Jim Crow-era murals already in the county courthouse, will be unveiled in April around the time of the 50th anniversary of the assassination of Dr. Martin Luther King Jr.

“Dr. King was our great leader who talked about injustice and was a drum major for justice so we want to display it at this time,” said County Commissioner Sandra Little Brown.

“Blacks should feel . . . we are a part of the justice system now. A lot of people have voiced their opinions saying it is a great idea” to include the mural.

The commission decided to appoint someone to create the new painting after criticism of the current murals came from the National Association for the Advancement of Colored People as well as an online petition demanding that the murals be taken down.

“These murals were painted in 1931-32 in the midst of Jim Crow, and they both romanticize a hierarchy of labor in which black people are positioned at the lowest level,” said the petition.

In response, the county created a 17-member committee tasked to figure out what steps to take.

The contract for the works is not to exceed $185,000 which includes installation no later than April 30.

Brown said she is looking forward to the unveiling.

“The importance of the new mural is to show where Jefferson County is today,” she said. “The old murals were created when it was still segregated and we are desegregated now. Blacks are in important positions in the county. We have a black county attorney, black CFO [chief finance officer], black commissioners and we’re up from that type of atmosphere now.”