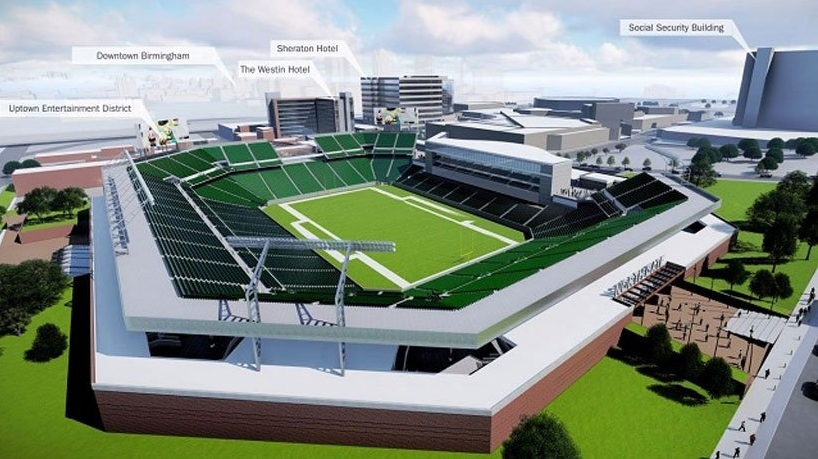 The bill imposes a 3 percent tax on automobile leases and rentals in the county to help support the new stadium, renovations and expansion at the BJCC.

The vote passed 14-3 and will now go to Governor Kay Ivey.

“The action the Alabama House took [Tuesday] puts us one step closer to Birmingham having state-of-the art facilities to better compete for tourism, sporting and entertainment business,” said Birmingham Mayor Randall Woodfin. “In addition, expanding and renovating the BJCC will generate millions of dollars over the next decade for the city that will go to neighborhood revitalization.”

The rental tax is expected to generate about $3.5 million a year to help pay the debt service on the project, which the BJCC Authority estimates will be about $21.5 million a year.

The auto lease and rental tax will not cost residents a dime because residents don’t lease vehicles to get around their own town, Woodfin said. Also, the city needs to modernize its entertainment and sports venues to compete with Atlanta, New Orleans and Nashville which have updated facilities that Birmingham lacks, he said.

State Rep. Jack Williams, R-Vestavia Hills, who sponsored the bill in the House, said passage of the legislation will lead to the renovation of the Legacy Arena at the BJCC and to the construction of a new 55,000 seat outdoor stadium. “This project will create 3,700 new construction jobs in Birmingham and Jefferson County and a $130 million payroll,” he said.

Renovations would allow the city to again attract NCAA tournament games which bring thousands of visitors and millions in revenue, Williams said.

“This public/private partnership between the city, county, BJCC, UAB and the corporate community will create thousands of jobs for citizens in Birmingham, and be a significant shot in the arm for our economy for decades to come,” he said.

State Reps. John Rogers, Mary Moore and Juandalynn Givan, all of Birmingham, voted against the lease and rental tax. Rogers said the BJCC would benefit from the additional revenue and not the city, which city officials disputed.

In February, the Birmingham City Council voted overwhelmingly to approve a resolution of intent to provide $90 million in funding — $3 million annually for 30 years — for the construction of a multi-purpose facility at the BJCC.

Woodfin has argued that money from tourism could generate revenue that could be used in the neighborhoods.

“There has been zero funding for street paving over the last several years. That’s a need. We have a $428 million budget and we’ve put less than $2 million in getting rid of dilapidated houses. That’s a need. Tourism is a need as well. Economic development is a need. Investing in our existing infrastructure, including the $5 million we’ve already put into the BJCC Legacy Arena, is a need. This is not an isolated topic. We’re not talking about an investment in a stadium alone. It’s an investment in the BJCC and our communities.”

After taking office in November, the mayor said he needed to find money to pave the streets. “I have to find money to invest in curbs, sidewalks and lights and neighborhood revitalization. That money does not exist today. We could cut a lot of money or we could borrow money, but that’s not an idea any of us want to take. I think the return of this [new and updated entertainment and sports venues] gets us to where those things can happen. If we’re going to generate new revenue where is that going to go? It will go toward those priorities that we don’t currently have funding for.”

According to the resolution approved by the council in February, certain conditions have to be met before any money is allocated. In January, the Jefferson County Commission approved $30 million in funding for 30 years; the largest contribution will be coming from the BJCC, who will pay $10.7 million in annual debt service for 30 years. The University of Alabama at Birmingham will lease the stadium for $4 million annually for their football games. Additional funding is expected from corporate sponsors as well.

The $174-million stadium is part of a $300-million master plan that includes a remodeling of the BJCC’s Legacy Arena and outside piazza.

According to an independent feasibility study commission by the BJCC, the stadium could be completed as early as 2020, in time for the 2021 World Games, and generate roughly $5.5 million per year in tax revenue during the construction phase and as much as $9.9 million a year after construction. There has not been any specific number given as to exactly how much tax revenue will be earmarked for neighborhood revitalization, but Woodfin has indicated it will be a substantial portion, if not all of it.