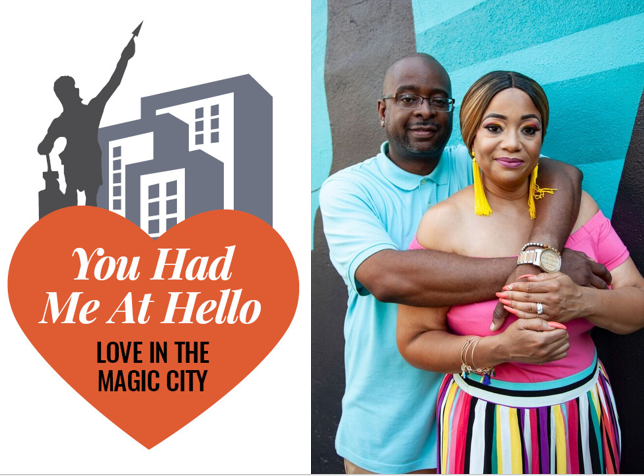 Met: In the summer of 1996 RaShunda went to Mt. Zion Community Church as the guest of a friend who attended that congregation.  Joseph was at his home church that day and happened to sit near RaShunda, whom he had never met.

“I thought he was very cute,” RaShunda said. “He definitely caught my attention.”  They did not talk during that church service, but the two were both invited to the same party later that night. There they talked. “I thought she was very attractive and really cool and down to earth,” Joseph said.  RaShunda, who was still in high school at the time, and Joseph, who was attending the University of Alabama at Birmingham, said they talked about their likes and dislikes and cooking — “He said he was a very good cook,” RaShunda recalled.  Joseph said he passed his telephone number to one of RaShunda’s friends. Not long after, RaShunda called.

First date: At the Olive Garden in Eastwood.  They also went to the movies to see “One Night Stand” with Wesley Snipes. “I remember being dressed up,” Joseph recalled. “The lights in the restaurant were dimmed and it was a romantic night.”  After the dinner and movie, RaShunda said Joseph took her on a car ride through the city that ended up at Joseph’s old neighborhood. “We just drove around and had a good conversation,” she remembered.

After that night, RaShunda and Joseph spent the summer together, hanging out and going on dates. Towards the end of the summer, RaShunda made a confession. “I told him I was in love with him,” RaShunda recalled. “He didn’t really reply, he just said ‘ok’.”  Joseph said he was caught off guard. “It really threw me,” he said. “I did not want to say I was in love if I didn’t mean it. That conversation did not go over too well.”

After that conversation the two parted ways. She finished high school, while he continued his studies at UAB. It wasn’t until her freshman year in college that RaShunda would reach out to Joseph again. “I had been going through some hard times, and I just decided to call him since I still had his number.”  For the next year, the two grew close as friends while they dated other people.  Their friendship continued for about two more years. By 2000 something had changed. “I wondered why we were not dating,” she said.  So the two agreed to try again and see what would happen.

This time it worked. They both said they fell in love this time. “I think I was older and wiser,” Joseph said.

The proposal: Before Joseph popped the question, he and RaShunda went to jewelry store and looked at rings. RaShunda did not know that she was picking out her own engagement ring.  On her birthday, Dec. 31, 2001, Joseph took her to the restaurant Bahama Breeze, which has since closed.  He had planned to ask her at the restaurant, but he got nervous. “I’m a private person,” he said.  He got down on one knee later that night.  They had rented a hotel room and there were candles glowing and snow falling.

The wedding: At the former New City Church in downtown Birmingham. “It was a really big wedding,” RaShunda said. “We had six bridesmaids and six groomsmen.”  RaShunda said she remembers being nervous from all of the activity that day.

“A lot of it was blur to me,” Joseph joked, as he admitted to not wearing his glasses on that day.

The couple ended up winning a free honeymoon at a bridal expo.  They travelled to the Bahamas.

Words of wisdom: “Always listen to each other,” RaShunda said. “It is best to go ahead and talk about (issues) to get it out rather than letting things fester,” she said. Joseph advises couples to limit the number of people you discuss the troubles and challenges inside of the marriage. “Keep things within your four walls,” he said. “Find someone— a pastor or psychologist— who can be neutral,” he said. He added: “And keep God in your life and continue to pray.”

Happily ever after: The couple has two boys ages 7 and 3.  They enjoy watching old television shows together, going to the movies and trying out new restaurants.  RaShunda works at Wells Fargo and Joseph works at UPS and Security Engineers Inc.  They look forward to more vacations and growing old together. “We look forward to babysitting our grandkids,” RaShunda said.