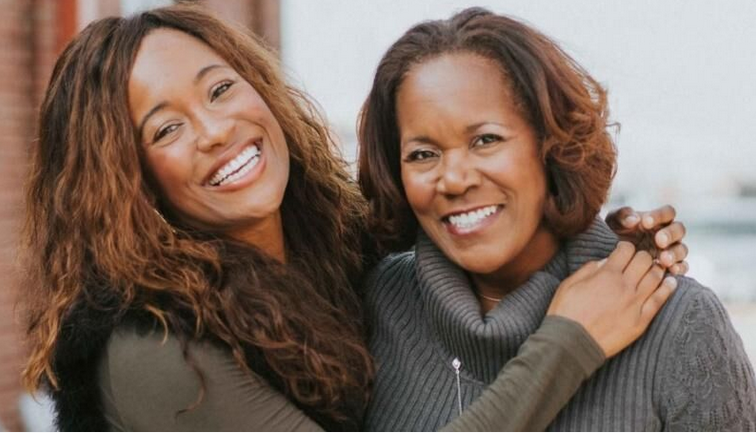 Ammons was at a conference, where attendees were instructed to “go up to someone whose name tag has the same dot color as yours.”

“I thought that was a very awkward way to kick off a conversation,” she recalled.

That same weekend, her mother had an opposite experience.

Schrader hosted a dinner party for about 40 people, and throughout the dinner she helped connect people who she thought would be interested in networking and getting to know each other. The next day, she told her daughter how successful the dinner was.

“I said, ‘I should start a business of some sort by making connections for people,’” said Schrader, after recalling her daughter’s story about how awkward it can be to meet new people at events.

That conversation led the two to develop Mixtroz—mixer and introductions—an app that helps users optimize their business networking experiences. Ammons is co-founder and COO and Schrader is the co-founder and CEO of the company, which was established in 2016.

Mixtroz was founded in Nashville, Tenn., but relocated to Birmingham to be part of the Innovation Depot’s Velocity Accelerator. The company won a $100,000 investment from the Rise of the Rest (ROTR) Seed Fund, led by entrepreneur and former AOL CEO Steve Case, that finances entrepreneurs who leverage their expertise to change the way people live and work. During its recent tour, ROTR stopped in Birmingham.

“To hear the person who basically created the internet say my company is potentially the future of the internet was incredibly empowering,” said Ammons. “It lets us know we were on this road for a reason.”

Entrepreneurship was never in the plans for mother or daughter.

“This is about as far from what I thought the plans would be as I think I could get,” Ammons said. “Now that I’m on the journey, I know it’s the right journey for me. Still, I had a hard time dealing with entrepreneurship because there’s so much uncertainty and doubt that goes into it as you’re building a company.”

No one in their family had ever been an entrepreneur, Schrader said: “I had parents who said, ‘Our kids are going to college and will be professionals, and they’ll have great lives.’ I followed suit and went to college.”

“I was doing well in my human resources career,” she added. “I never, ever thought about owning anything other than property.”

“A lot of people come from entrepreneurial families, like the family owned a restaurant or some other kind of business,” she said. “We don’t have any of that. While everybody in our family is educated and doing well in their careers, everyone has worked for someone else. That’s how I thought it would always be.”

Ammons, who is from Cleveland, Ohio, earned a degree in mass communications and public relations from Baldwin Wallace University in Berea, Ohio. She worked as first assistant for Cleveland Cavaliers star Lebron James from 2007 to 2009. She has worked with mogul Oprah Winfrey, movie star Leonardo DiCaprio, and entertainment giant Jay-Z. And she has held positions with brands like Moët Hennessy and Coca-Cola.

Working for James was “an extraordinary experience that kind of pivoted the direction I was going, even in college,” she said.

“I was a broadcasting major, so I always had an interest in news, like on the anchor or producer side. Working for [James], however, helped me discover my love for events—the speed, high energy, and nature of them,” Ammons said.

From the Ground Up

Transitioning from working 75-plus hours a week was difficult, she said: “It’s kind of like you lose yourself for a second. I took my work very seriously, and I loved it. I just thought that [those hours] was part of the lifestyle. I always believed that you go to New York to hustle, so [I went there] and did that, too.”

Working on Mixtroz was an adjustment, Ammons said.

“To go from the top all the way back down to the bottom … is like going from entering a venue through a velvet rope to waiting in line. I had to go back in line,” she said with a laugh. “It’s really hard to go back. It was definitely hard. It took time to cross over to this and be like, ‘I’m building this company with my hands from the ground up.’”

Mixtroz already has some top local clients. It is working with Alabama Power to help new employees get integrated into the company’s networks. And, in July, it is teaming up with the Birmingham Business Alliance (BBA) for an event during which about 250 interns from area corporations will meet at Regions Field.

“We’re going to help interns across different sectors and companies connect with one another,” Ammons said.

Prior to the event, students will be able to download the Mixtroz app for free and answer a series of 10 questions customized by the BBA.

“[This will allow the] BBA to learn about the interns and help them get connected,” she said. “Then, at networking time, everyone will get a push notification showing who they have been matched with, including pictures and names, and they will go to a meeting place in the venue and have a real-time networking experience.”

The Future of Innovation

Ammons believes this exemplifies the future of innovation.

“It ties a lot to where … the internet is going,” she said. “We’re tied to this wave of people coming out of careers, seeing gaps, and going to solve those problems.”

Mixtroz will be launching a software-service company, similar to sites like Eventbrite, Mailchimp, and SurveyMonkey. Currently, the company has a $1 million campaign underway to spark growth, and the mother-daughter team is confident that it can garner support from its new home in the Magic City.

“Birmingham is really recognizing that tech could be the future of the community,” said Schrader. “It’s amazing and it kind of takes my breath away to see how Birmingham recognizes that.”

Schrader said she hopes the company can get funding now: “I want people to see that our product is worthy of investment and there is a market for it.”

As far as her business partner, Ammons said she couldn’t think of a better one to have.

“I can’t imagine doing this without my mom because, realistically, she’s the person I always call when things are going on in my life,” she said. “It’s amazing to have her next to me, experiencing these things with me in real time.

“If you’re starting a company with someone, make sure you really love that person. Otherwise, it’s probably not going to work.”

Schrader agreed: “[My daughter has done] awesome work in every job she’s had. I’ve always known that about her. … She is meticulous. … [She and I] are very yin-and-yang. We can disagree, but we respect each other’s expertise and move forward.

“I never expected [the two of us] to work as a team, but I think it’s a great thing.”