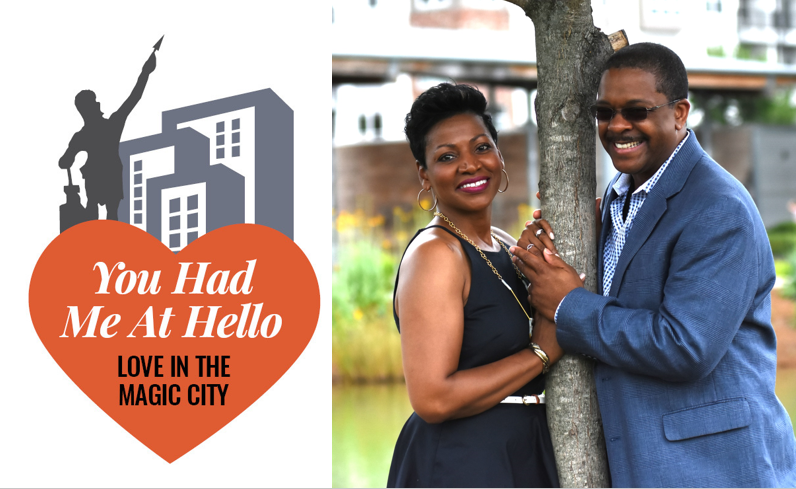 Met: It was early 2014 and Leslie was single, living in Philadelphia and Ken was living in New Jersey. Leslie, who was divorced, was getting pressure from friends about finding another mate. Leslie said she was not really in a hurry to find another relationship, but a friend encouraged her to sign up for Match.com. Leslie, already a mom of two sons, was hesitant, but eventually decided to make a profile. She made the profile sometime after midnight and by the time she awoke that next morning, she already had over 100 messages, some from as far as Australia. “I just thought this was way too much.” One was Ken, who was also divorced with a son and daughter and living in nearby South Jersey.  Ken had been on Match for about three weeks and was also hesitant about finding the right one. Leslie and Ken started messaging back and by 9:30 that same night were on the phone until 2 a.m. “She was just so transparent and real,” Ken said. “We talked on the phone for about five days, then decided to meet.”

First date: He and Leslie met at a pub in New Jersey. Ken was smitten with Leslie immediately. “When I saw her she was the most beautiful, gorgeous lady and at that moment I knew I was going to marry her.”  After meeting Ken in person, Leslie said, “It was amazing to meet someone so aware of his behavior, and someone chasing after God’s heart.”

The proposal: Just four months after meeting, the couple flew to New Orleans. Ken already knew it was time to ask Leslie for her hand in marriage. He bought the ring, made dinner reservations at Broussard’s and had flowers and gifts already waiting for her. At the restaurant, Leslie said she was oblivious as to what was coming until a waiter came out with Bananas Foster and Ken dropped to one knee. “I saw him and said what are you doing on the floor,” she laughed.  The waiter at the restaurant managed to snap photos documenting the entire proposal — a detail that Ken planned perfectly.  He still has the photos on his phone.

The wedding: The couple wed at Seeds of Greatness Bible Church in New Castle, Delaware.  Leslie wanted a small wedding of just friends and family and Ken wanted a large wedding. They compromised and had about 100 guests— only those, they said, that would be committed to supporting them and helping them honor their wedding vows.

It had been a whirlwind eight-month romance, but the two remember that day they were very sure this was meant to be. “I was not worried at all on that day,” Leslie said. “I knew he was a gift from God.”  Ken, who thought he would not wed again after his divorce said: “For the first time, I was at peace.”

Words of wisdom: Ken and Leslie are full of advice. In fact it is a part of his job. He leads a divorce ministry as pastor of House of Light Church in downtown Birmingham and he has written a book: Divorced But Still Dad – Faith Principles of Fatherhood for Divorced Men.  While he counsels couples about divorce, Ken said he also encourages couples to do the work necessary to save a troubled marriage. Ken and Leslie want people to know that even if a marriage fails, something good can come from it in a new relationship. “There is hope,” they say.  “But save your first (marriage) if you can,” Leslie said.

The couple urge people to try again if a relationship ends. “But put a little more God in it the next time,” Ken said. “God is at the head of our household.”

“There is a lot of work to do,” Ken said of trying again after a divorce or working to stay married. “You have to go to seminars, read books, you have to be intentional.”

Happily ever after: The couple moved to Birmingham in June of 2017.  Ken took a job in the industry he has been in the past 25 years, but with a new company. Along with pastoring his church, Ken is a vice president of global sales and marketing for a local biotech company. Leslie works as a compliance officer for Cigna Life and Health.  They said they like the South, particularly the food.  They look forward to more time together as they look towards the future. “I look forward to doing anything that includes Leslie,” Ken said. “Just laughing together and traveling together … being any place as long as she is there.”

“Can I just say ditto,” Leslie said. “I just love us. The thing I thought only existed in a fairytale, actually came true. I believe that God put us together because we have work to do to help others.”