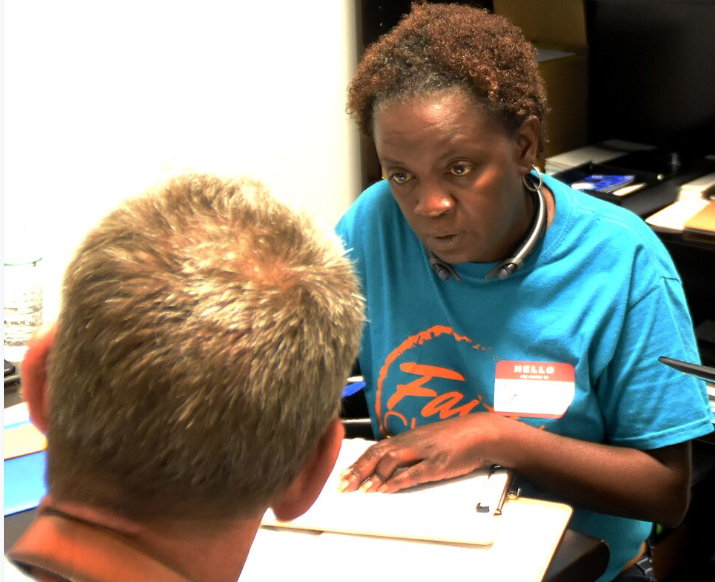 Demitri Miller has been attending the Faith Chapel Care Center in downtown Birmingham for a year, an experience he calls “100 percent lovely.”

“I went to church with them for the first time last week, and I plan to go back,” said Miller, 24, who is homeless. “The praise and worship is my favorite part because I feel like I’m in the presence of God.”

Miller feels the Care Center, part of the Faith Chapel Christian Center in Wylam, shows that churches do actually care about the community.

“They’re doing what Jesus would do. They’re accepting of everybody, and I love that,” he said, adding that the myriad services provided at the Care Center aren’t usually available elsewhere.

“This is the first center I’ve been to that provides these kinds of services,” said Miller.

“Sharing of the Word is, without a doubt, a major part of what our program is about,” she said.

The Care Center, which is open on Saturdays and on July 10 began opening on Tuesdays, conducts an hour-long church service and a support group that’s followed by lunch.

“That gives people a place to talk to each other and receive ministry from one another,” Blaylock said.

Latorya Franks, a physician assistant with Alabama Regional Medical Services (ARMS), has been volunteering with the Care Center since August.

“It’s an awesome opportunity, especially being able to help. [Being homeless] is an unfortunate situation, and lot of times people don’t get the medical care they deserve,” she said, adding that ARMS has a metro clinic, where homeless people can get care free of charge.

The Faith Chapel Care Center works with several local agencies that support the city’s homeless—the Firehouse Shelter, The Foundry Ministries, the YWCA, First Light Inc., Pathways of Birmingham, the Church of the Reconciler, and others.

Mentoring is an important part of the Care Center’s efforts.

“We call them people in transition, not homeless, because we’re all in some transition in life,” said Blaylock. “If a person is committed to our mentoring track, … we partner with their caseworker.”

For mentees who are enthusiastic about and dedicated to the program, the center will make sure they get into classes that can put them on a track to employment and other resources they might need.

“For example, if they need steel-toe boots for work, … that’s where we come in,” Blaylock said.

The next step: affordable housing.

“Well, this person now has a job, but the [social services] agency can’t help them pay the deposit for their home. That’s where [the Care Center] steps in again,” Blaylock said.

As a church, Faith Chapel Christian Center has a history of working with homeless agencies, but in the past it often did so only through monetary donations and volunteerism, Blaylock said. In the fall of 2014, Faith Chapel Senior Pastor Mike Moore began his work with community partners to eradicate homelessness in the city of Birmingham.

“Before we opened the Care Center, we met with a number of agencies [that work with the homeless] to discuss what services they felt were needed and how we could support the city’s goal to end homelessness,” Moore said. “We continue to collaborate with these agencies and work with their clients that frequent our facility to meet their needs.”

The church had always maintained working relationships with agencies like One Roof, which coordinates regional services provided by homeless-advocacy agencies, but the congregation wanted to do more.

“We engaged a team of people, a planning team, and met for about a year,” she said. “A few of those involved were executive directors of shelters, others were members of the church, and a couple had actually been homeless at some point in their lives and had gotten on their feet.”

A big part was listening to the agencies and community to see what was needed: “What’s our part? Where do we fit?”

“We knew it would be a collaborative effort,” Blaylock said. “Eradicating homelessness in the city, that’s a huge job, so we knew we would just be part of the team. We figured out where Faith Chapel fits and which gaps in services we can fill. That’s how we got started.”

On average, the Faith Chapel Care Center has more than 250 volunteers serving at least once a month.

“They are excited about the opportunity to take ministry outside the walls of the church,” said Moore. “They comment that just being there each week has given them a much greater appreciation for how serious the homeless problem is in our city. They feel honored to be able to not just give their time and talents but also [provide] finances through the church.”

Volunteers Andreal Howard and Tony Reddell have been at the Care Center since its opening in 2017.

“It feels good to know that the church you’re part of is actually doing something to give back instead of seeing no growth outside of the church,” Reddell said.

For Howard, it’s about being part of something bigger than herself: “Anytime you’re able to be part of something or an organization that’s willing to change the lives of other individuals, which also, in essence, changes you as an individual, it’s a great feeling.”

Reddell said he has learned about homelessness in Birmingham since he started volunteering at the center.

“I was at Railroad Park last week [with my daughter] and saw some of the guys who come in here,” he said. “You don’t realize how many homeless people there are. They’re in this community right there beside you. You’ll see people who don’t have anything, and you’re enjoying the same thing they’re doing.”

“I didn’t realize how many people actually work and are in poverty,” Reddell said.

Having a presence downtown among Birmingham’s homeless population is important, but Faith Chapel Community Center is also an active presence in the Wylam community, where its main campus is located.

“[In Wylam’s] schools, we provide tutors, we host parties for honor roll kids. We meet with one of the principals twice a year, when she lays out her plans for the year,” Blaylock said. “Whatever we can do to help, we do. We cater to the [local] fire department. If they need a TV or a microwave, we take it to them. We take meals to them during the holidays, too.”

It’s important for churches to help the communities they are in, Blaylock said: “See what their initiatives are, their goals. See where you can fit in with that.”

At Faith Chapel Community Church, concern for the homeless situation goes beyond the work being done at the Care Center.

In the next five years, the church will look at investing in some type of housing initiative.

Moore said, “We would like to work with others to provide more decent affordable housing.”

Blaylock said, “When someone in our mentoring program needs somewhere to stay, we’ll have somewhere for them to stay. As a church, we have to look at that.”

“I don’t see the church as the only answer to the many problems within our community, but I see leadership at every level within the community joining forces to help improve the way of life for our families,” he said.

As far as how where he sees the Care Center in the next five years, Moore said, “We would love to expand our weekday hours of operation, add more paid staffing support, increase the types of services we provide, and build more collaborative partnerships with the city of Birmingham and other agencies that serve the homeless population.”

The most important resource, however, is spiritual growth.

“You can get a job. You can get a house. But if something is missing [spiritually], you can still end up in a miserable life,” Blaylock said. “I think the church can provide something other agencies can’t. There are so many needs in the world. I believe every pastor needs to know his or her target audience. … Pastors need to pray and ask God who [He] is calling their church to [help].”

Click here to read a similar story about Birmingham pastors.

Click here to read a similar story about The Worship Center.