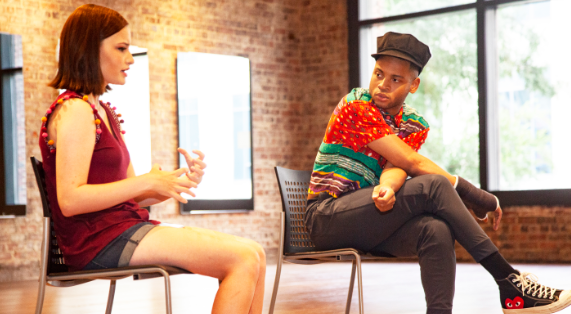 “Where is your pencil and paper?” actor Ryan Jamaal Swain calmly asked one of the attendees, a young girl.  “You’re going to need something to take notes.”

The hardwood floor of the Forma Arts + Wellness studio in downtown Birmingham was empty, save for three chairs. The introductory assignment had a fellow attendee sit beside him. For five minutes, he asked questions like “What’s your favorite childhood memory?” or “What was a time that made you feel really nervous?” The person listening had to monitor the speaker’s facial expressions and body mannerisms. From the outside looking in, it seemed tedious but it was preparing the aspiring performers for television and the mainstage.

Swain is best known for his role as Damon on “Pose,” the latest from Ryan Murphy of “Glee” and “American Horror Story “fame. The ground-breaking series is also Murphy’s last project with FX.

On the mini-series, he plays an aspiring dancer who finds solace in the 1980’s New York ball scene after being kicked out his parent’s home for being gay. In the Big Apple, he’s taken in by Blanca, who teaches him the ins and outs of ballroom culture.

Since its debut in June, the official Pride month, “Pose” has been applauded for its use of transgendered actors and honest depictions of the AIDS epidemic of the ’80s. The show has also been celebrated for its positive portrayals of the LBGTQ community. “Pose” stars Billy Porter (Kinky Boots), Indya Moore (Saturday Church), MJ Rodriguez ( R.E.N.T) and Evan Peters (X-Men Apocalypse).

Swain said he already planned on visiting for a family engagement and figured it would be worth a shot to hold the workshop again. All it took was a few phone calls.

“That’s the beautiful thing about being from the South and being a southerner,” Swain said. “There’s always this interval space of hospitality, togetherness and family oriented-ness that you forget sometimes when you’re up in a big city like New York. Coming back here being able to be supported the way I am and continued to be supported is transformative.”

Born in Birmingham, Swain made a name for himself, performing in various productions at Virginia Samford Theatre, Alabama Dance Academy and the Red Mountain Theatre Company before moving to the nation’s capital to study at Howard University.

Since graduating, he’s been in New York City, starring in the Off- Broadway productions of “Kill Move Paradise” and “13 Alabama Ghosts and Jeffrey. However, Birmingham will always be his true home.

“A lot of who I am and what I’ve accomplished thus far and is made up of this city [Birmingham]”, Swain said. “You know, being a product of the city, it definitely is somewhere where there’s so much Civil Rights permeating in the bricks and in the sand and the pavement that I think my career as an artist and activist was always really in my DNA. Some of my great aunts have walked with MLK and did the sit-ins and went to jail and did all of those things.”

Swain called his role as Damon on “Pose” a “transformative, amazing experience” especially since it’s tackling such a historic era only briefly referenced in documentaries like the cult classic “Paris is Burning.”

Earlier this month, FX announced that it would be renewing the “Pose” for a second season. In the meantime, Swain is using his time off to give back to the community and work on independent projects, which includes writing a teen fiction that follows a young Southern protagonist, “learning the duality” of being black and queer in America. The book is projected to release in the fall.

“I just want to make sure I’m always pouring into this community that helped this little southern boy realize that his dreams were possible,” Swain said. “That makes me more fulfilled than any type of small screen debut, any big screen debut, any type of Broadway debut. Knowing that I’m laying the precedent for a legacy of young, black and brown babies and everyone that has a dream to make sure they see that ‘If Ryan can do it, then I can do it.”