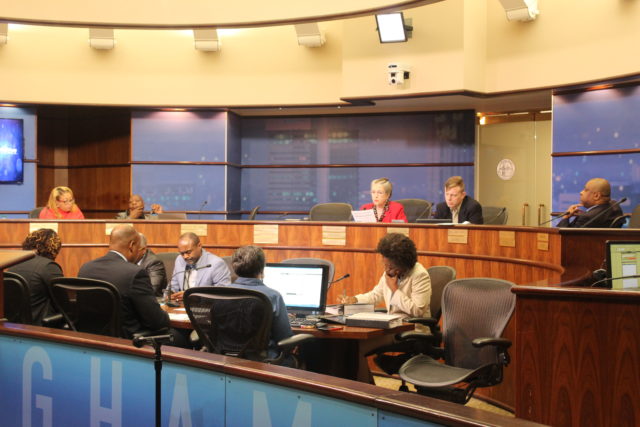 The Birmingham City Council is now taking applications to fill the seat that will be vacated when District 7 Councilor Jay Roberson steps down on Sept. 10.

It’s one of three vacancies that has to be filled this year.

Roberson said last week he would move to Alabaster where his wife will work with the school system.

The deadline for applications is by Sept. 10 at 5 p.m. and each applicant should be a qualified elector for the city of Birmingham, at least 21 years old, and cannot hold any other public office except for notary public or a member of the National Guard, Naval or Military Reserve.

The council will have three vacancies seats including District 1

Councilor Lashunda Scales and District 6 Councilor Sheila Tyson who recently won Democratic primaries and will most certainly join the Jefferson County Commission in November, since they have no Republican opposition.

“This has never happened in the history of the Birmingham City Council that three members have been leaving at the same time, unexpectedly,” Council President Valerie Abbott said. “We haven’t even been in office a whole year in this term and we’re already having people leaving. No one would have expected that people would run for an office and then vacate it.”

Per the Mayor-Council Act, the council will vote on filling the vacate positions and will begin taking applications for Districts 1 and 6 in mid-to-late October, Abbott said.

“This (District 7) is our test case,” Abbott said. “We’ll make sure our plan works and when the other two seats come up we’ll be seasoned and know what we’re doing. Until last week, nobody knew we were going to have (another empty seat).”

There are still some unknowns, Abbott said.

“If there’s five people it’ll probably be pretty quick (to find a new person),” she said. “But if there are 40 people, then we’ll have to step back and figure out how we’re going to deal with that. I’m hoping it’s a relatively small number, but with these things you just don’t know.”