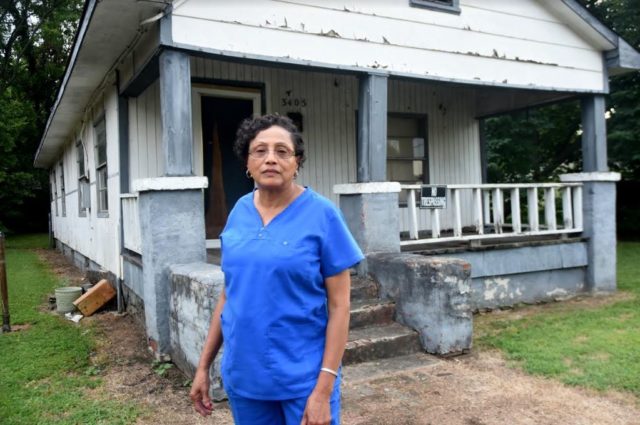 Tammie Smith has been back in North Birmingham’s Acipco-Finley neighborhood for just a year, but the 54-year-old has lived in that community nearly all of her life, except for 13 years when she lived in Louisville, Ky.

During her time living there, Smith said everybody always seemed to be dealing with upper-respiratory problems.

“The kids always kept colds,” she said. “It was something you never could explain. Now that everything is coming out, it seems to make sense.”

What has “come out” are reports showing that contamination in the soil in the North Birmingham community, potentially from the exhaust emitted from nearby industrial plants, could be the cause of some of the health issues.

Attorney David Ludder, who has advocated on behalf of residents for years, said he has been disturbed by “the failure of government at all levels—local, state and, federal—to control polluting industries sufficiently to protect the health and welfare of residents.”

In filings with the U.S. Environmental Protection Agency (EPA) Office of Civil Rights, Ludder wrote that “frequent emissions” from one plant in the area could be the cause of “adverse impacts suffered by residents” and produce “irritation of the upper respiratory tract or cause symptoms of nausea” … or lead to “respiratory irritations, sinus headaches and infections, and exacerbation of symptoms of chronic obstructive pulmonary disease (COPD) and asthma.”

Over the past month, the Birmingham Times spoke with residents in North Birmingham neighborhoods—Harriman Park, Fairmont, Collegeville, Acipco-Finley—about living in the shadows of major pollution sources.

“Can you imagine how many people [may have] died from [the pollution] and there was never any knowledge about what happened to them?” Smith asked. “So many people over the years—10 years, 20 years—have died in the Collegeville and North Birmingham areas, and it was unexplained. Nobody knew why people were dying out like they were. A lot of people died from cancer. A lot of people.”

Lillie Jackson was six months old when her mother moved their family to Collegeville. That was nearly seven decades ago.

“That’s the house over there,” the 67-year-old said from the porch of her 33rd Street home. “All my life I’ve lived in Collegeville, and all my life I had to smell the [U.S. Pipe and Foundry Co.] shop … and all that kind of stuff. My sister developed congestive heart failure and cancer, and she died … in 2015.”

Jackson did not escape illness: “I survived breast cancer and a heart attack, but I’m still here.”

She recalled attending meetings about the contamination of the area. She recounted filling out stacks of forms that were inches thick at those gatherings.

A BirminghamWatch.org analysis this month found that a vast majority of Jefferson County’s 31 major sources of pollution—those emitting enough pollution to require an Operating Permit under Title V of the EPA’s Clean Air Act—are located in low-income areas.

The findings show that 71 percent of the major pollution sources are in areas with incomes below the median income for the county. Residents of the same low-income areas also often are largely African-American. Research has shown that economically depressed populations can be more heavily affected by the negative health effects of air pollution.

Sam Powe, another lifelong Collegeville resident, remembers his father working at Walter Coke Inc. His older brother would tell him that the plant “made clouds.”

“He told me that because he was just a little older than me, but as far as I was concerned that’s where they made clouds,” he said, pointing toward billowing white puffs drifting upward in the northern sky. “That was that [potential] pollution. They’re cooling that coke off right now, and all that soot off the coke is what’s blowing down on everybody right now.”

Powe said you don’t know anything different when you live among the smokestacks all your life.

“We’ve just been living out here in the middle of it. … It’s an everyday thing,” the 66-year-old said. “I know a lot of people got sick and a lot of people died [potentially] because of it, but there wasn’t anything we could do.”

In 2013, the EPA identified five potentially responsible parties (PRPs) for the current pollution in the neighborhoods, which have been the site of heavy industry for more than 100 years. The named parties are Drummond Co. Inc., which owns the nearby ABC Coke facility; Walter Coke Inc.; Alabama Gas Corp. (Alagasco); U.S. Pipe and Foundry Co.; and KMAC Services.

Efforts by the Birmingham Times to reach those companies for comment were unsuccessful.

In July, Drummond Co. Vice President David Roberson and Balch and Bingham attorney Joel Gilbert were convicted of six criminal charges for bribing former Alabama Rep. Oliver Robinson to oppose the EPA’s cleanup of the area. After the verdict, Drummond Co. released a statement that said in part, “We are disappointed by the jury’s decision to convict our employee, David Roberson. … When an environmentalist group raised allegations regarding our operations in the Birmingham area, Drummond responded by hiring one of Alabama’s most well-respected environmental law firms. … We were assured the firm’s community outreach efforts on our behalf were legal and proper.”

JoAnn Carroll has been a Collegeville resident for most of her 58 years; she spent 12 years in Milwaukee, Wisc. She was pregnant while living in the North Birmingham community and believes the pollution in the area caused her daughter’s asthma. Carroll said residents “got used to” living among the smokestacks.

“All that black soot would be all over the cars,” she said. “It would just be falling out of the air. It’s been hard. It was there when I was born. My mom had asthma real bad. My grandmomma died with bronchitis from being in this area. All of it [was because we] lived in this environment.”

Carroll believes some plants in the area may have known of the effects of their emissions, “… but they just didn’t care. They were right there in the plant, and I know they saw this stuff falling.”

“They’re taking the old soil away and bringing in new,” she said. “But [the pollutants are] in our walls, in our houses. It couldn’t just be in the yard.”

“Sick All the Time”

Sixty-nine-year-old Theresa Butler lives in Roebuck these days. Growing up in Collegeville, she was the “puny” child in her household on 29th Avenue North.

“I used to be sick all the time,” she said. “I had nosebleeds, and I was very anemic and just sick.”

In those days, children didn’t go to the doctor, Butler said; they went to a clinic for routine shots. Even after she became an adult, she continued to feel ill. She was in and out of the hospital before being diagnosed with sarcoidosis of the lungs, for which there is no cure. The disease has affected other parts of her body, as well; she has had a knee replacement and a shoulder replacement.

As she did in her youth, Butler attends worship services at Collegeville’s Wilson Chapel Baptist Church.

“Where we were, grass never would grow in the yard,” she recalled. “We swept the dirt, we swept the yard, and we played in the dirt. We were kids.”

Last week, U.S. Rep. Terri Sewell joined EPA officials and state and local lawmakers for a tour of Birmingham’s 35th Avenue site designated for EPA cleanup through the agency’s Superfund program, a federal government initiative designed to fund the cleanup of sites contaminated with hazardous substances and pollutants. Sewell encouraged people who have rejected soil testing to allow the EPA to check for contaminants.

“What’s concerning all of us is there are 500 or so sites that are either abandoned properties or people refuse to allow the EPA to come in and remove [potentially hazardous substances] from those sites,” Sewell said. “We’re trying to get the public confidence back.”

The group of officials who stood on a vacant Collegeville lot was a show of force, according to Sewell. Among those in attendance were Birmingham Mayor Randall Woodfin, EPA Region 4 Superfund Division Director Franklin Hill, Birmingham City Council members William Parker and John Hilliard, and Alabama Rep. Mary Moore.

“The cleanup will take the concerted effort of state, local, and federal agencies but also the community,” Sewell said. “I issue a plea to those [responsible for] sites that have not been tested. We understand that some citizens may be distrustful, but it’s important for us to truly have a cleanup effort that is comprehensive, that we get [testing for] those that have not been tested. We stand ready to help in that process in whatever way we can.”

Still, some neighbors who’ve lived for decades in the shadows of North Birmingham’s pollution remain skeptical.

Henry Barnes, 64, lives on 33rd Terrace North, across from the Bertram A. Hudson K-8 School. He has lived in Collegeville since 1963, but he never got used to the conditions brought on by the plant emissions.

“That’s why I’ve got lung cancer now. It was a mess out here,” he said, adding that he isn’t confident about the future in the area.

“I don’t think there will be another generation out here,” Barnes said.