The general election is Tuesday, November 6.

The debates were sponsored by the Phi Iota Omega Chapter of Alpha Kappa Alpha Sorority Inc. and the Birmingham Association of Black Journalists in the Hill Student Center at University of Alabama at Birmingham.

Anderton talked about his goal of reducing recidivism rates for ex-offenders.

“What we’ve got to do is make sure they have some hope, make sure they’ve got something in their future that they can walk to with pride and know that when they get there they’ve accomplished something.”

Carr said he would take a progressive approach to corrections.

“Make sure that we do things that benefit those individuals while they’re paying for the crime that they committed,” Carr said. “The worst thing that could happen is that they go in and come out worse . . . because then they come in our community [and cause even more problems]. We have to . . . make sure that you are placing people in the best position they can be in when they get out so that they won’t return to a life of crime.”

Anderton said, “recidivism involves those people who have been in the criminal court system whether they have gone to prison or not. And I think part of this is still providing that kind of hope so that once they leave the criminal court building they know they have services available to them so that they can … reform their lives.”

The candidates were asked about conditions in the county jail after questioned about a federal lawsuit that claims that county jail in Birmingham is designed for 600 inmates, but currently has 1,700 inmates.

“Those people who can sign a signature bond not having to produce any cash could be allowed to do that,” said Anderton, as a step to relieve overcrowding.

Take a look at the bond for those who are in the jail for nonviolent offenses, he added, “but there are some people who belong in there.”

Carr said the DA’s office should be creative in its plea agreements for nonviolent offenders.

“It’s easy to send them off to prison, that’s the simple way,” he said. “But the best way to do it is to look at their background, make sure we have professionals in place to deal with the daily mental health issues.”

The candidates were asked about steps taken to build trust with community members who are sometimes needed to provide information on crimes.

He added that it’s important to have potential witnesses to trust the district attorney’s office so “they will engage us with their testimony.”

Hale was asked whether the sheriff’s department would outfit its deputies with body cameras. He responded that a new generation of body cameras is already being used in Jefferson County and more will be fully implemented the first week in October.

Pettway said he believes body cameras protect citizens, the deputies and the truth.

“This day and age there is no reason why we should not have body cameras,” Pettway said. “It’s a powerful tool to use . . . I’ll implement them when I get there day one.”

The candidates were asked about nonlethal options for stopping suspects fleeing arrest. Hale said his department reflects the community.

“You have to start at the lowest level which is a verbal command, then you work yourself up to lethal force,” Pettway said. “That’s why I advocate for cameras because if you’re going to use lethal force we need to be able to see why you used lethal force.”

Pettway said he wants to be sure that deputies will know when and how to use force on suspects.

The candidates were also asked about funding and whether there are plans to work with some of financially strapped law enforcement departments in the county like Fairfield.

“We do that day in and day out,” Hale said. “The key to our success is the metro area crime center where everybody buys in to sharing data, sharing information in fighting crime across jurisdictional boundaries,” Hale said.

Pettway said the right approach is to make sure officers are in those areas.

“Officers deter crime, not the Met center,” he said. “You have to have an officer to work the beat. I’ve talked with the chief in Fairfield, Lipscomb and Brighton . . . We have to partner with the Jefferson County commissioners and those cities to make sure we have funding to put officers in those areas to give them the same quality of protection that everybody deserves.” 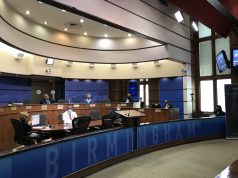