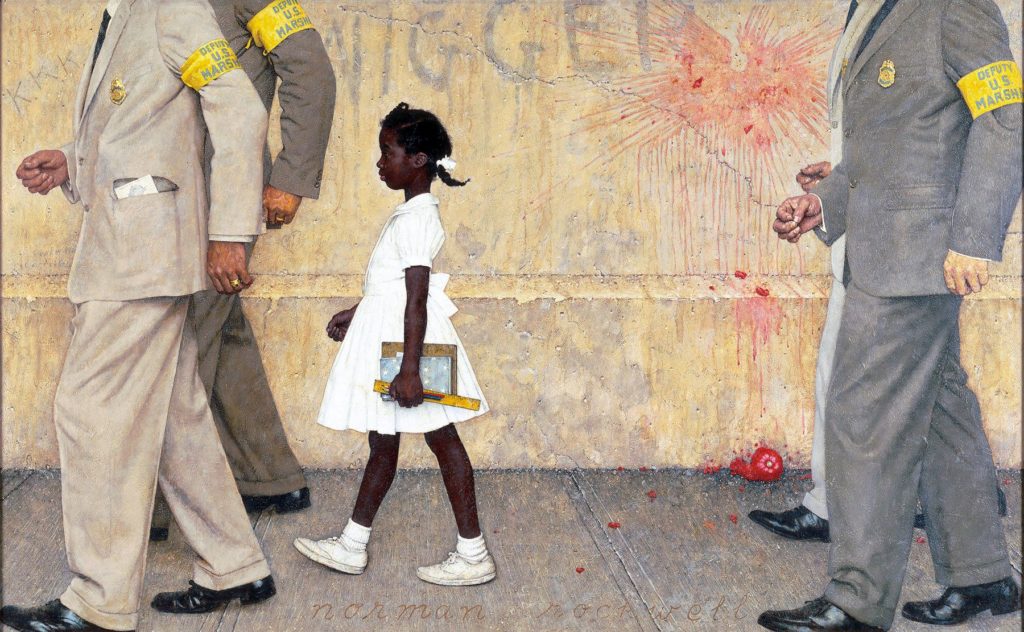 I recently had the joy of presenting an award to Ruby Bridges from the Washington Lawyers’ Committee for Civil Rights and Urban Affairs. As a six-year-old first grader in New Orleans in 1960, Ruby Bridges became the first black student to attend an all-white elementary school in the South. She showed unforgettable loving forgiveness and courage when faced with ugly screaming white mobs who jeered and taunted her every day as she walked into William Frantz Elementary School.

Federal marshals had to escort Ruby to school every day, but she never quit or turned back. Norman Rockwell immortalized Ruby’s courage with his landmark 1964 painting “The Problem We All Live With.” Ruby astonished her teacher one day when she asked Ruby why she had paused and talked to the crowd of white adults that morning. Ruby responded, “I wasn’t talking. I was praying. I was praying for them.” And a little child shall lead us!

As a young psychiatrist Dr. Robert Coles volunteered to work with Ruby Bridges during her first year at William Frantz. Years later she collaborated with him on his 1995 children’s book “The Story of Ruby Bridges” to share with new generations what she experienced. She realized after that book was published that children had even more questions about her life, so she wrote two autobiographies for young readers including her award-winning book “Through My Eyes.” Today she is the founder and head of the Ruby Bridges Foundation, which seeks to end racism and prejudice and promote tolerance, respect and appreciation across all differences.

Ruby’s messages of tolerance and mutual respect are so urgent right now. Equal access to a quality education for all children remains the unfinished business of the Civil Rights Movement and the nation. Our country must wake up and stop the backwards slide away from fair treatment for poor and non-white children. When Ruby Bridges spoke at a Children’s Defense Fund conference she took us back to her first year at William Frantz and a few key lessons she learned that shaped her life.

Ruby explained that her parents seized the opportunity for her to attend William Frantz because they understood it would provide a better education in our separate but unequal segregated school system still too prevalent today. On her first day of school she was unaware she was making history. The chaos of milling white crowds outside her New Orleans school reminded her of Mardi Gras and at first she thought she was part of a parade. Eventually it became clear that the white adults surrounding her with racial jeers and epithets were full of hatred not celebration. But then she met Barbara Henry, the white schoolteacher from Boston who was assigned to teach her all year alone after other teachers refused to teach a black child.

Barbara Henry’s kindness set an unforgettable example for Ruby: “You cannot look at a person and tell whether they’re good or bad. Evil comes in all shades and colors. That is the lesson that I learned from the teacher that looked exactly like the people outside that threw things, spit, and yelled—she looked exactly like them, but she was different, and I knew that at six years old, because she showed me her heart.”

Learning that you can never judge anyone from the outside was the first lesson of that tumultuous year. A second was that we must all “become brothers and sisters.” “We must absolutely take care of one another. It does take a village, but we have to be a village first. We have to take care of each other’s children.” She remembered some of the adults in her neighborhood who did this for her: “I was escorted every day by federal marshals, but everyone on my street walked behind the car every day . . . I would pass [the windows of a dry cleaners’ shop] every day, and all the men that worked in the dry cleaners would wave and say, ‘How are you doing today? You do good in school.’ So when I got my report card, I would stand by those windows . . . and they would see it and they would hand me dollar bills . . . That’s a community, and that’s what we need again.”

As an adult Ruby Bridges takes very seriously her own commitment to being part of that community needed to care for the next generation of children. She is a fierce advocate for integration and equity in education and for teaching children accurate history including stories like her own. She says: “If you really think about it, if we begin to teach history exactly the way that it happened, good, bad, ugly, no matter what, I believe that we’re going to find that we are closer, more connected than we are apart.” When she was told that her plan for educational equity was grandiose, she responded: “Well, it was a grandiose plan when you marched my little butt up those stairs back in 1960, but it happened.” In a nation desperate for moral leadership and vision we need many more citizens with grandiosity like Ruby’s.

In 2011, President Barack Obama invited Ruby Bridges to the White House to see Norman Rockwell’s iconic painting of her which was on loan to hang outside the Oval Office. President Obama told her, “I think it’s fair to say that if it wasn’t for you guys, I wouldn’t be here today.”

Ruby Bridges is an inspiring reminder that our entire nation owes a huge debt of gratitude not just to the adults who took a stand during the Civil Rights Movement but to the thousands of extraordinary children and youths who were frontline soldiers in the war to overthrow Jim Crow in American life from the Birmingham Children’s March to the children locked in the cattle pens in Jackson, Mississippi protesting segregation in Mississippi’s closed society. Children were the frontline soldiers in desegregating our segregated schools across the nation. Our children and young people taught us to be courageous, to stand up against injustice and to do so with uncommon dignity, maturity, nonviolence, and grace. What a contrast to the ugly violent behavior of hate-filled adults all around them.

It’s time to thank Ruby Bridges today by following her example and supporting all our children today who are standing up against injustice and pervasive gun violence because we adults have dropped the ball of adult responsibility. It’s time to ensure every child equal education, health care, a strong early childhood foundation and safe passage to adulthood. It’s time to replace the greed of those at the top to ensure the hopes and dreams of our millions of children crying out for hope and help. We must all follow Ruby Bridges’ example.

Marian Wright Edelman is President of the Children’s Defense Fund whose Leave No Child Behind® mission is to ensure every child a Healthy Start, a Head Start, a Fair Start, a Safe Start and a Moral Start in life and successful passage to adulthood with the help of caring families and communities. For more information go to www.childrensdefense.org.