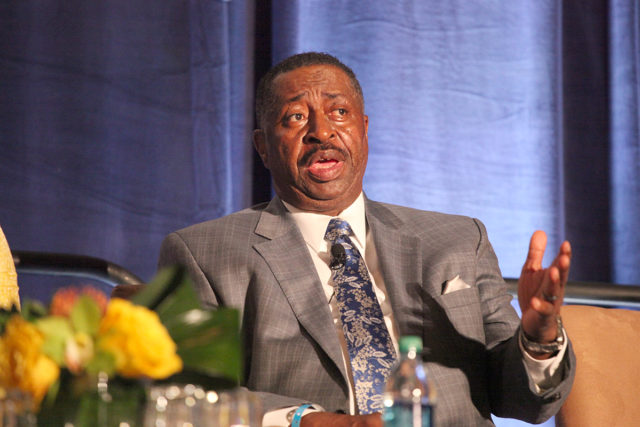 Mr. Calhoun owned Calhoun Foods, which operated in west Montgomery for more than 20 years, starting in 1984. At one point he owned 15 locations. He also founded Calhoun Enterprises and was involved in several other business ventures.

In recent years he partnered with comedian Steve Harvey on several ventures, including festivities surrounding the Turkey Day Classic in 2016. The duo’s investment group purchased a Eufaula latex glove plant in 2015.

Mr. Calhoun’s daughter, ShaKenya, posted on Facebook that her father died Thursday, Oct.11 at 5:55 a.m. at Cedars-Sinai Medical Center in Los Angeles. “Words can’t express the shock and hurt we are enduring at this moment but we KNOW God does not make any mistakes!!” she wrote. She asked for prayers for the family.

Harvey wrote on Facebook that he was with Mr. Calhoun “to the end.”

“It is extremely difficult to say farewell to a dear brother, a golf partner and a traveling buddy,” Harvey wrote. “Greg had a brilliant mind and was a successful businessman, a master negotiator, and one of the most welcoming and energetic spirits I have ever known.”

In 2013, Calhoun told the Montgomery Advertiser about his beginnings in the 1980s, when he tried to buy the Montgomery grocery store where he once bagged groceries. He had to go to New York to secure a $1 million loan after he was turned down by multiple banks in Montgomery. The first thing he did after taking over was raise salaries at the new store – while cutting his own salary in half – then committing to working 16 hours a day.

He put up his family’s house as collateral on the loan.

The loan was scheduled to be paid off over seven years, but he did it in three. In the years that followed, he bought more than a dozen other stores in Alabama and Georgia before branching out into financial work, warehouses and a brokerage business, among other ventures.

The Rev. Jesse Jackson Sr. called him a “freedom fighter.” Mr. Calhoun served on the board for Jackson’s nonprofit Rainbow/PUSH Coalition. ““I miss him so much already,” Jackson wrote on Twitter.

Alabama State University President Quinton Ross issued a statement praising Calhoun as “a great friend” to the community and to the university.

“Mr. Calhoun rose from humble beginnings to become one of Alabama’s most successful business people, whose impact reached local, national and international levels,” Ross said. “We offer our condolences to the Calhoun family and pray that God’s peace will be with them during this time.”

Mr. Calhoun told Black Enterprise in January 2016 that he met Dr. Martin Luther King during the march from Selma.

Mr. Calhoun said, “I had the privilege of meeting him during the march from Selma. I was young–about 12–and I didn’t know anything about staying in the back so I ran up to the front. Dr. King put his hands on my shoulders and told me, “Young man, you stay behind the line right here. Stay back where it’s safe. It’s dangerous out here.”

Mr. Calhoun said he was on the march with his father, Thomas, who was a business owner and his mother, who was the head of housekeeping at a Holiday Inn along the Selma highway. Asked about his opinion of Dr. King, Mr. Calhoun said, “I thought he was very, very intelligent . . . he had an air of leadership about himself.”

The Rev. Willie Welch will officiate the services with Lewis Robusky Mortuary, of Prattville, handling the funeral service arrangements. Expressions can be sent to the Mortuary, 307 County Road 4, Prattville, AL, 36067.

The Montgomery Advertiser contributed to this report.