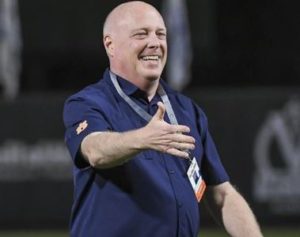 AUBURN, Ala. (AP) — Rod Bramblett, the longtime radio announcer for Auburn football and basketball games, and his wife were killed in a two-vehicle accident. He was 53.

“All of us in the Auburn family are devastated by the tragic passing of Rod and Paula Bramblett,” athletic director Allen Greene said. He noted Bramblett’s “fervent” love for Auburn.

“You could hear it coming through the radio loud and clear each time he exclaimed ‘Touchdown Auburn!’” Greene said.

The 16-year-old driver of the other vehicle was taken to the hospital with non-life-threatening injuries, authorities said. The driver’s name was not released. Harris said alcohol was not a factor in the accident, which is still under investigation.

Bramblett, a 1988 Auburn graduate, had been the Tigers’ play-by-play announcer for football and basketball since 2003. He started announcing Auburn baseball games in 1993.

“I’m heartbroken by the loss of Rod Bramblett and his wife Paula,” football coach Gus Malzahn said. “Rod was a true professional and was always a pleasure to work with. He loved Auburn and it showed in his work. As much as he loved Auburn, his family came first and foremost.”

Bramblett was a three-time Alabama Sportscaster of the Year. His most famous call came on the “Kick Six” play in the Iron Bowl game against rival Alabama in 2013. Auburn won the game and advanced to the Southeastern Conference championship game after Chris Davis returned a missed field goal 109 yards for a touchdown on the final play.

He also called Auburn basketball’s first run to the Final Four this past season.

“It won’t be the same without Rod,” basketball coach Bruce Pearl said. “Ninety minutes before the game and 20 minutes after it, we spent time talking Auburn basketball. He loved Auburn, the student-athletes and the coaches and it showed every time he called a game. As good as he was at what he did, he was a better man. He was kind, considerate and selfless among so many other great qualities.”

The Brambletts are survived by two children, daughter Shelby, an Auburn student, and son Joshua.