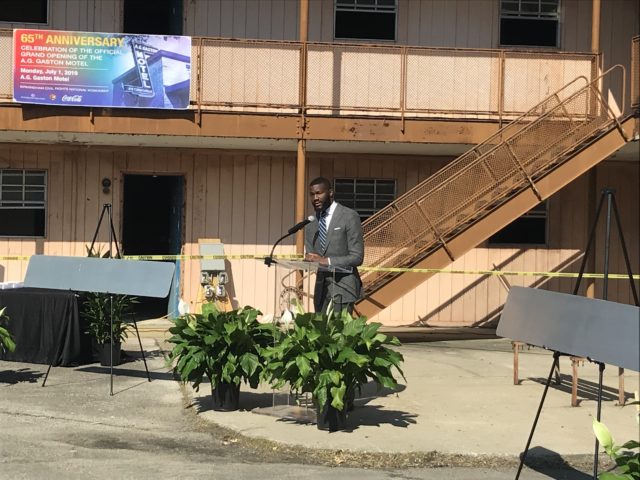 “He would always send me to the other end of the lake because I was a little chatterbox and I didn’t understand that fishing was a quiet sport, but he always let me know that he appreciated all of my encouragement and advice but he told me, ‘just go down there and watch those fish for me — quietly.’”

Malone was one of several Gaston relatives on hand Monday along with Mayor Randall Woodfin; Alabama Sen. Doug Jones and other city officials in the courtyard at the A.G. Gaston Motel in downtown Birmingham to commemorate the 65th anniversary of the hotel’s opening.

Gaston’s legacy will be honored in a number of ways. Not only will new life be breathed into the historic motel, but a portion of Fifth Avenue North will also be renamed A.G. Gaston Blvd., an honorary designation.

Gaston, the city’s first African-American millionaire, opened the motel on July 1, 1954 to offer first-class lodging, entertainment and dining options for African-Americans traveling through a segregated South. At the time, African Americans found few motels or hotels that would cater to them simply because of the color of their skin.

Celebrities like Aretha Franklin, Duke Ellington and Harry Belafonte stayed at the motel, which also became a place for civil rights leaders the Rev. Martin Luther King, the Rev. Fred Shuttlesworth and others to develop strategies during Birmingham’s civil rights movement of 1963.

“We stand here in celebration of a man whose vision opened doors for so many black people in our community as well as a site that was Ground Zero for social change and not only transform Birmingham but transform our country,” said Woodfin. “A. G. Gaston was certainly a man of means, but the impact he made on our community goes much deeper, much, much deeper than the zeros in his bank account. He embodied the heart of philanthropy. He knew that with great wealth and great power came even greater responsibility.”

Jones said it was fitting that that hotel is being restored.

“So many things have happened here in Birmingham at this motel, the streets, the church, you name it and we were the catalysts for the changes,” said Jones. “Throughout the country, we always will restore. We will take the historic places whether it is Philadelphia or Boston and those places that are famous for freedom and liberty but there is no place any more famous for freedom than right here in Birmingham.”

Although it closed in 1986, the city of Birmingham subsequently purchased the property and has announced plans to restore it to its look of 1963 with help from the National Park Service.

Crews have been assessing the roof, windows, doors, frames, brick exterior, etc. to determine what is needed to refurbish the building to its historical significance. A. G. Gaston Construction Co. will oversee the restoration. The project is expected to be completed by December 2021. It will serve as a visitors’ center as well as a place for meetings.

If her grandfather were still alive, Malone said he would still be a great fisherman and a great businessman.

“He would say to each of us: ‘Stand still and watch your fish. Keep an eye on them. Watch the way they conduct themselves, the direction they are swimming in and the schools they are connected to. Observe their pattern of operation. Study the way they implement their strategies, then recognize where you fit in. Find the need and fill it. Plan how you can create growth and take charge. It’s not rocket science,’’ said Malone. “Know what you can catch, know that you can catch the right fish without the proper bait because your success comes by knowing when and how to cast your line into the sea of success.”

The City of Birmingham is collecting people’s stories and photos of the A.G. Gaston Motel. To share, please submit memories, photos and/or phone numbers to gastonstories@birminghamal.gov.

For more information about the restoration project www.birminghamal.gov/gaston.