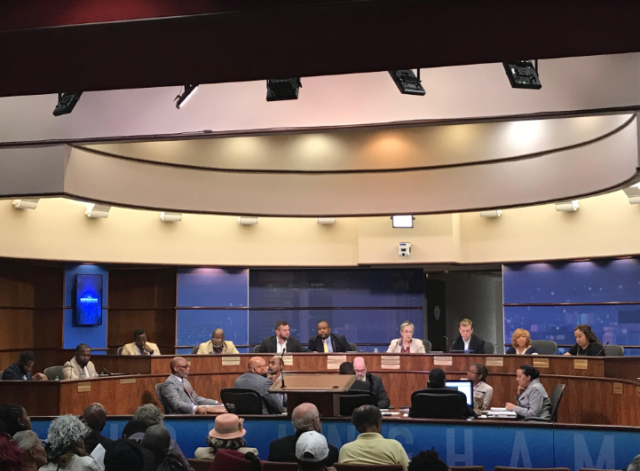 Birmingham city leaders on Tuesday asked for continued prayers for a 4-year-old shot in the Marks Village housing community, and one councilor said town hall meetings on crime should be held in each of the city’s districts.

The girl, whose name is Journee, was shot in the head when gunfire outside entered her family’s apartment in the Marks Village housing community on the east side of Birmingham, according to reports. Her condition is unclear, and a suspect is in custody.

“I ask that the council and the residents of Birmingham continue to pray for 4-year-old Jurnee, a resident of the Gate City neighborhood,” said Mayor Randall Woodfin, during the council meeting held Tuesday evening.

Councilor Steven Hoyt, who has been vocal about the city’s violence, even suggesting that the National Guard be called in, recommended town hall meetings about crime in the city’s respective districts.

“I certainly would like to host because we’re still not talking about [crime], not engaging in what I call formidable dialogue . . . I think we really need to hear from folks and I think if you hear from people then we’ll become more conscious of it,” he said. “I just don’t want us to be desensitized to what is happening in these communities.”

Woodfin and Councilor Darrell O’Quinn, who represents the area where the shooting occurred defended residents who live there.

“Gate City is a neighborhood full of families, good people and people know each other and it is not issues where there is a conflict within the neighborhood among people,” Woodfin said, “ … these are instances where people have brought their issues to disturb the peace in this neighborhood. We can’t disparage or talk bad about a particular neighborhood, or people within this neighborhood because that’s not always true.

“If a family or a resident is minding their own private business and somebody brings drama to their front door where an innocent child is shot, not only is it unfortunate but it’s reckless and stupid… our energy needs to be focused on praying for this family right now.”

O’Quinn, who represents District 5, said he lives not far from Marks Village.

“I ride my bike over there at least three times a week and usually there’re folks standing out socializing and everybody’s getting along, but occasionally we see the things that unfortunately we’ve experienced in the past few days,” he said. “Gate City is not a place that needs to be condemned. They love their community and their families and we need to do everything we can to support them.”

In other matters, the council set Tuesday, October 8 for residents to vote on the renewal of taxes for the city school system and decide on councilors for Districts 1, 6 and 7.

The property taxes that benefit Birmingham City Schools are set to expire Sept. 30, 2021 and generate an estimated $27 million per year for city schools. These are not new taxes. City voters last approved an extension of the taxes in 1991.

The council seats were vacated when District 1 Councilor Lashunda Scales and District 6 Councilor Sheila Tyson both resigned in November after they were elected to the Jefferson County Commission. Clinton Woods in District 1 and Crystal Smitherman in District 6 were appointed to fill vacancies while the District 7 seat which came open when Councilor Jay Roberson resigned; that seat was filled by former Birmingham Board of Education President Wardine Alexander.