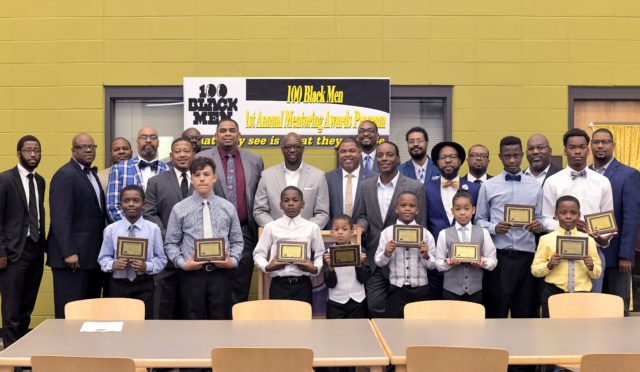 Previously, when 9-year-old Oxmoor Valley Elementary School student Adrian Whitely spoke to adults, he would hang his head and focus his eyes toward the ground, a gesture of social awkwardness rather than respect.

After attending the 100 Black Men of Metro Birmingham program this year, Whitely not only makes eye contact during conversations but is generally more respectful, said his mother, Shar’neisha Williams, who is a single parent.

“He’s changed a lot since he’s been part of the program,” she said. “He’s starting to read a tad bit more. He likes to write now. He’s always writing a poem or some type of rap. He’s in the process of making his first rap song, ‘Stay in School.’ He wants to be a rapper, and I told him he could only be a positive rapper.”

Whitely’s behavioral change came gradually through Saturday meetings with adult mentors connected with the local 100 Black Men program. The mentoring group is one of many Birmingham organizations pairing children with adults who can guide them successfully through the challenges of youth.

Although organizations like Big Brothers Big Sisters of Greater Birmingham focus on finding mentors for boys and girls, it understands the critical need to provide positive role models for boys.

Of the more than 100 children on the Big Brothers Big Sisters waiting list to find mentors, 70 percent are boys, said Big Brothers Big Sisters of Greater Birmingham spokesperson Brooke McKinley. “We have a lot of children from single-parent households—usually that’s single mothers—who need role models, particularly males for our boys. We are always in desperate need of male volunteers.”

The absence of adult-male mentors Big Brothers Big Sisters is experiencing parallels the absence seen in general society. According to the U.S. Census Bureau and other groups that monitor such statistics, the number of single-parent households is growing, particularly within the African American community, which has the largest percentage of single-parent households (as high as 65 percent, according to census data) of any racial demographic in the United States.

“Once largely limited to poor women and minorities, single motherhood is now becoming the new ‘norm,’” according to a June 14, 2019, article from singlemotherguide.com. “This prevalence is due in part to the growing trend of children born outside of marriage—a societal trend that was virtually unheard of decades ago. … Today one in four children under the age of 18—a total of about 16.4 million—are being raised without a father.”

Recognizing the critical need to pair boys with adult-male mentors who can help them reach manhood and become productive members of society, President Barack Obama in 2014 launched the My Brother’s Keeper initiative “to close opportunity gaps facing boys and young men of color.”

A year later, the nonprofit My Brother’s Keeper Alliance (MBK Alliance) was formed to continue the initiative’s mission after Obama left office. So far, nearly 250 cities have accepted Obama’s challenge and through local groups and agencies have provided mentorship opportunities for youth in their respective communities, according to the MBK Alliance website (www.obama.org/mbka).

In the Birmingham area, various groups have organized to provide mentoring in fields they find most important. Big Brothers Big Sisters has been on the forefront of this issue, as its more-than-100-year history—46 years for its Birmingham chapter—attests.

“We pair children in our community who need mentors,” McKinley said. “They may be facing some type of adversity, come from a single-parent family, struggle in school to make friends. We pair them with a volunteer adult mentor or a high school student, depending on which program they need.”

Others have tailored their programs to target specific demographics they see as being in greater need of mentoring. Last month, the Birmingham Public Library (BPL) Central Branch announced Real Mentors Talk, an after-school male-mentoring program designed to serve as a lifeline to youth in the Birmingham area; it is scheduled to begin in September.

Another program, the Dannon Project, provides reentry and crime-prevention services to ex-offenders by collaborating with local correctional institutions and faith- and community-based organizations. Among its comprehensive services is a mentoring program for at-risk youth. For all the programs the Dannon Project offers at-risk youth and ex-offenders, mentoring is the glue that holds them together, said James Sutton, mentoring coordinator for the Dannon Project and former board member for Growing Kings, a local 501(c)3 nonprofit organization dedicated to improving the lives of underserved boys and men of color.

“The real key to making sure all these services are successful is [ensuring that each participant] has someone walking with them to help them learn how to make better decisions in life,” Sutton said. “If we’re providing job training, if we’re teaching people how to dress, but they don’t know how to apply those things in life, then it falls to the ground. They need somebody to journey with them.”

The Dannon Project partners with groups that assist it in developing volunteers to serve as mentors to the youth enrolled in its program. Tarnett “Todd” Morris is a member of Phi Beta Sigma Fraternity Inc., which has taken an interest in mentoring at-risk youth at the Dannon Project. Morris has developed a relationship with Micah Whitlock, a 20-year-old Pratt City male who was referred to the program. Morris said he and his fraternity serve as positive male role models.

“We tend to see a lot more single moms and a lot more female involvement in the lives of these young men,” said Morris, who has two adult sons. “We need our young men to know there are male role models who are doing positive things: black men who work honest jobs; black men who are from different backgrounds and work different professions; black men who have sons and are having a positive impact on their lives.

Some Birmingham mentoring groups focus primarily on black males because of the lack of positive adult-male role models; and take steps to address the problem holistically. Growing Kings and 100 Black Men of Metro Birmingham, for instance, fall into this category. Both operate programs that address academics, literacy, character, and relationships, as well as career development. Both have teamed up with area schools and rely on schools to identify potential males who need mentorship.

“It might be a teacher or a principal who says, ‘This boy might really need to be included in [a mentoring program],’” Sutton said. “It could be a boy who has some identity or disciplinary issue, who just needs some extra guidance and attention.”

The Man Project, founded by Richard Cade in 2015, caters to males from ages 10 well into adulthood.

“The Bible says in Proverbs 27:17 (NIV), ‘As iron sharpens iron, so one person sharpens another,’ so I want to be a tool to get connected and uplift my fellow brother,” Cade said.

“Mr. Love actually reached out to me,” she said. “He was like, ‘We’re going to make [Whitely] a part of this mentoring program because he has so much potential.’”

“We don’t handpick any of the students. All of them are referred to us. We just ask that they are referred the next year, so we are able to have that long-term relationship with them, which is critical,” he said.

Growing Kings, which works in nine city schools, and 100 Black Men require the mentor, young people, and parents to be on the same page about the mentor relationship.

“You have to have everybody involved—the parent, mentor, school representatives, and mentee,” said attorney Ronnie Rice, who is president of 100 Black Men of Metro Birmingham. “You need buy-in with all parties involved to ensure overall success.”

“It’s not just about the title. It’s about people who see the needs of the community from a global perspective. These are people who see deficits in our community, understand the need, and are putting resources behind it to ensure each student’s success,” said Rice, adding that 100 Black Men is starting a new program called 100 Black Men Collegiate.

“They will be college students who will be mentees,” he said. “Once they get a certain age and graduate, they’ll have an opportunity to go through our process and become a part of the 100 Black Men full chapter.”

“I’m just glad there’s a mentoring program for young black males,” she said. “With everything that’s going on in society these days, I’m happy we have someone who can reach out to these black men before it’s too late.”

How Can You Help?

If you’re interested in learning more about or getting involved with local programs designed to mentor and support young black men, you can get more information at …