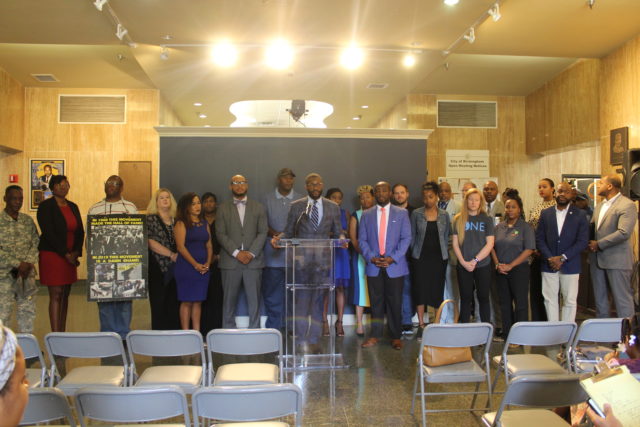 TeAndria Ellis remembers when her brother was killed seven years ago at the age of 22. The teens who killed him were ages 15 and 16.

“One thing my mother said to one of the guys’ moms as they were being sentenced…was that neither one of us win,” Ellis said, “So, with that in mind we want to help as many parents as possible with alleviating the potential hurt they will experience due to violent crimes in the city of Birmingham.”

She was at City Hall on Tuesday with more than a dozen other community organizations committed to working with youth across the city of Birmingham. Each organization submitted a plan that was reviewed by the city’s Division of Youth Services and the Office of Peace and Policy.

The work of the groups go hand-in-hand with the city’s three-pronged strategy to increase peace in Birmingham by putting an equal emphasis on prevention, enforcement and re-entry, said Mayor Randall Woodfin.

The city distributed more than $107,000 among the organizations to help with their efforts.

“Flooding our streets with badges is only one tool in the toolbox and decreasing crime in our city. No amount of enforcement, no amount of arrests will totally eliminate violent crime,” said Woodfin. “Real solutions start with making connections with our young people on a fundamental level, it’s listening to their stories, it’s understanding their journey and it’s breaking  down the root causes of the violence that plagues some of our city and some of young people.”

It’s not incarceration that will help reduce violence, it’s the restoration of hope, he said.

“And I believe teaching conflict resolution is a key ingredient to erasing and decreasing violence in our communities,” said Woodfin.

Ellis, whose group received $7,000, said she wanted to be a part of the initiative because of what it means for young people.

“The youth in our city, we are definitely in a crisis and I have been directly affected by that crisis of violence,” she said. “We want to try to save as many of them as possible.”

The city’s initiative helps to promote a healthier social engagement and the work doesn’t fall solely on the mayor and the city council or the Birmingham Board of Education,” she said. “It also falls into the hands of every parent, guardian, and resident within the city limits . . . to get actively involved with the youth in their communities. What we fail to teach in childhood and adolescent ages, that becomes the fuel to extremely dangerous decisions in the future.”

Chenoia Bryant Founder/COO) of the Diaspora Collective, LLC, based in Birmingham, which received $8,500, said she has researched how history and how young people navigated conflict and how students can leverage stereotypes to prevent conflict, negotiate it, or mitigate it.

Bryant said it’s easy to hone in on the individual but…but her studies turn the lens on the larger picture “so that people can have an understanding as to why they’re doing what they’re doing… Thinking about the way [the mayor] approaching it more holistically, it allows for so many more components to be addressed.”