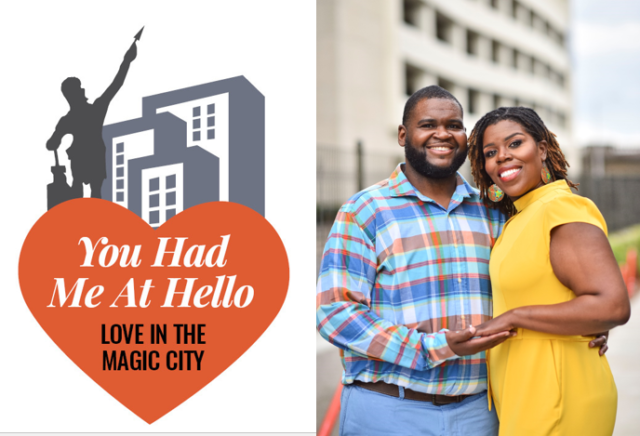 Met: The two met in summer 1999 while on their lunch break at work for TeleTech Holdings in Fairfield. He was with a group of friends from his department, and she was with a group from hers at the Pizza Hut in Fairfield. “We glanced across the room and our eyes locked with each other…that was the thing that actually drew me to him, he had the biggest brownest eyes I had ever seen and come to find out later they were contacts,” she laughed, “but that’s okay.”

Anthony remembered her “pretty smile” and how attractive her height was to him. “I’m 6’3, I’m tall, and she stands about 6 foot  . . . I was noticing Pauline before Pizza Hut. I was in the Quality Assurance department and she was with the Customer Service department on the floor.”

They developed a really good friendship from there but wouldn’t acknowledge anything more because both were in relationships. A few months later they decided the people they were with “weren’t the ones for us,” Anthony said.

First date: By the fall of 1999, Pauline and Anthony went on their first date at the Cracker Barrel in Bessemer. “It was an information gathering session,” Pauline said. “I felt really comfortable with him, we realized we had similar backgrounds as far as our families, our beliefs in God and our spiritual journey…”

Anthony said, “…I was able to be myself and once the conversation got started I felt very comfortable talking to her. . .  At our age it was common for people’s parents to be divorced, so when she said that her parents were still happily married and had been for 30 plus years (at the time) that was kind of identical to my parents.”

The turn: Spring 2000, Anthony was invited along on a “sisters-cousins cabin trip” to Gatlinburg, TN, with Pauline and her family.

“I’m a romantic and I wanted it [the trip] to be something special that she wouldn’t forget… I pretty much was in love, and I felt like I was in competition with the boyfriend that was transitioning out, so me and her [twin] sister have always been in cahoots about stuff when it came to plans for Pauline, and we got together for me to do something special.”

Pauline remembered, “There was a little hot tub in the bathroom and he got some candles and spelled out ‘I Love You’ on the floor in the bathroom. No one had ever done anything like that for me before, and it sealed the deal,” she said.

The proposal: “It was a decision that we collaborated on, to be honest,” Anthony said.

“He did not propose in the typical sense,” Pauline agreed. “…at this point I was close to finishing my last year [in pharmacy school], and we knew that we wanted to be together immediately because we had been talking about marriage for about the last year…but we were talking on the phone, I was at work and I told him that they offered me an opportunity to move to Hunstville after I graduate and be the pharmacy manager for the company I worked for.”

That meant “we need to go on and get married so that you can move with me and we can be together after I graduate,’ Pauline told him, “. . . it was almost like a scheduling instead of this grand fairy tale … when was I off rotation was the question? It just so happen to be that August.”

The wedding: They were married at ‘The Wedding Chapel in the Glades’ in Gatlinburg, TN. Their colors were lavender and silver. Anthony’s father, Rev. Emmanuel Long officiated.

For Anthony, most memorable was the wedding night. “I remember that I almost died,” he said. “…I slipped in the shower and literally [tore] everything down. Keep in mind, I’m almost 400 pounds, and so my new wife comes in and I’m in the shower on the floor with shower rods over me…I survived, but I almost died.”

Words of wisdom: Becoming one means becoming a team, good communication is learned over time, and having a joint spiritual connection to God are important, said the Longs.

“For me, when we became one, we became one in everything, finances and all…,” Anthony said, “in every way that a person can be individual, we became [a unit]. When issues arise, we tackle those issues together, we attack everything as a team.”

When it comes to communication, “good communication is learned over time,” he added, “it’s better to talk through things because this is your life partner.”

Pauline said, “don’t sweat the small stuff, prayer is important … I think a lot of times when relationships and things don’t go as planned (especially if you’re a planner like me) that can get [people] a little razzled, but if you think about it, it [the small stuff] won’t even matter in five minutes, five months or five years. You have to look at that even when you’re in the midst of a battle…”

Prayer is also key. “We’ve had very difficult challenges in our relationships, loss of family members, loss pregnancies…it took a lot of prayer and supporting each other to get through those challenges,” Pauline said.

Happily ever after: The Longs have two children, daughter, Peyton, 10; son, Seth, 1. “The birth of our son last year is a high we haven’t come down from yet,” Pauline said. “We’ve always wanted a son and a daughter…”

Pauline, 42, is a Bessemer native and McAdory High School grad. She attended The University of Montevallo, where she earned a bachelor’s of science degree in biology. She also earned her doctorate in pharmacy degree from McWhorter School of Pharmacy at Samford University. Pauline is a pharmacist/co-owner of MedsPLUS Consulting LLC, “where we engage, educate and empower patients to be the champion of their health,” she said.

Anthony, 40, is a Forestdale native and a Minor High School alum. He attended Virginia College where he earned an associate degree in business administration. He is also a realtor. 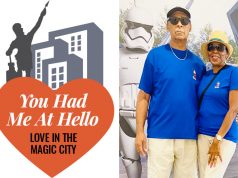 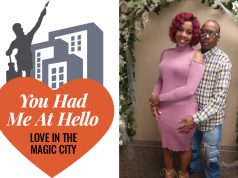