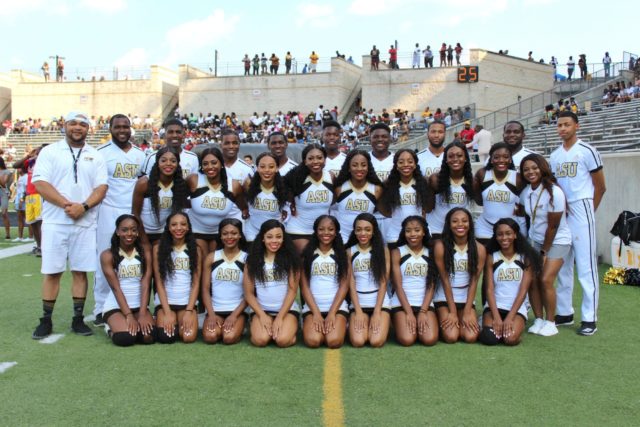 When the 78th Magic City Classic kicks off on Saturday, October 26, Ashley Grimes wants fans to know that the football players of Alabama State University (ASU) and Alabama Agricultural and Mechanical University (AAMU) won’t be the only athletes on the field.

Grimes is one of the captains of the ASU cheer squad, and she and her team have been preparing for the Classic for weeks—practicing new stunts, perfecting pyramids, sharpening tumbling skills.

“We are athletes,” Grimes said. “I know [the players] hit people and tackle, but we’re lifting and throwing human bodies in the air.”

The university seems to agree with Grimes. The cheerleading squad is under the school’s athletics department, and the cheerleaders must work out with the department’s fitness trainers twice a week in addition to going to practices.

AAMU is ASU’s biggest rival, and the annual showdown at Birmingham’s Legion Field draws an average of more than 60,000 attendees. Overall, thanks to tailgating and other events, Magic City Classic weekend boasts an estimated 200,000-plus participants. So, just as the school’s football players must be at the top of their game, the cheerleaders hold themselves to the same high standard.

“Cheerleaders are important because they set the tone,” said ASU Cheer Coach De’One Gregg. “They get everybody fired up.”

Typically, ASU cheerleaders practice four days a week; they have Mondays off and a shorter practice on Fridays. But leading up to Classic weekend, practices are longer, more intense, and held five days a week.

“They know we don’t get any sleep in October,” Gregg said. “The ASU cheerleaders participate in customized workouts facilitated by our athletic trainers. We practice our stunts and cheers to make certain we look clean and sharp. In addition to training for the big game, we also prepare for the parade, pep rally performances, and various appearances.”

The cheer team also comes up with new routines and makes special signs that read “Beat A&M” to taunt AAMU: “We don’t have that for any other team,” Gregg said.

Bigger Than the Game

For Grimes, being an ASU cheerleader is about more than sports.

“It gives me a lot of pride to know that I [am] part of this and represent something this big,” she said. “I’m thankful [to] be in that position.”

“I just knew I didn’t want to not have my college degree,” said Grimes, an elementary education major. “I knew that if I wanted to excel in life, I had to get my education.”

Being older than most of the cheer squad hasn’t put her at a disadvantage. In fact, it’s been a plus.

“My life experience makes it easier for me to lead,” she said. “They respect me a lot more.”

Nonetheless, Grimes said she learns as much from her squad as they learn from her, and she views them as her peers despite the age difference.

“The only thing they do differently from my friends and me is they stay up later,” she said with a laugh. “We go to bed!”

Grimes, a Montgomery, Ala., native, started cheering when she was in eighth grade. A friend of hers wanted to try out for their school’s cheer squad but didn’t want to go it alone, so she asked Grimes to try out, too.

“I really didn’t think I was going to make it,” Grimes recalled. “I was really raw. I was the backyard girl. I didn’t really have any technique. I didn’t go to any classes for cheerleading or tumbling. I learned everything at home.”

Still, Grimes made the squad—and just kept getting better.

“I ended up loving it, so I’ve been doing it ever since,” said Grimes, who also cheered at Prattville High School in Prattville, Ala. “Cheerleading is like an escape for me.”

Grimes can still remember her first time cheering for ASU. The football team was playing against Florida Agricultural and Mechanical University (FAMU)—a game that drew droves of fans—and a fellow cheerleader asked Grimes if she was nervous.

The huge crowds of the Magic City Classic don’t intimidate her, either: “That helps me perform better,” she said.

In the weeks leading up to the Classic, Taryn Hartley listens to a lot of music by pop artist Ariana Grande. Hartley, a Montgomery, Ala., native, is a senior at ASU, where she’s been a part of the cheerleading squad for four years. As a biology major with a minor in chemistry, balancing cheerleading with academics can be tough, especially as the team prepares for the Classic. So, Hartley turns to music to get her through the busy days.

“It helps me de-stress,” she said. “I try to listen to music before practices. I listen to music while doing homework. It’s just a way for me to keep calm and not feel like everything is crashing in on me.”

Cheer practices are longer and tougher as the team prepares for the Classic, Hartley said.

“We have to be much more focused because we’re trying new things and want to showcase new things,” Hartley said. “It’s just a lot of work, and it takes everybody working together in order to get the picture together. October is always our toughest month due to Classic.”

But letting her 3.9 GPA slip this time of year is not an option for Hartley, who plans to attend medical school after graduating from ASU.

“I’m crazy about my grades, so I have to be aware of how much time I’m putting into everything,” she said, adding that Coach Gregg helps with that by giving each cheer squad member a planner and calendar of events to help them keep track of games, practices, and other important dates.

ASU’s cheerleading squad travels with the football team for almost all away games. They also cheer at the basketball team’s home games and are sometimes asked to cheer at baseball games, track meets, and volleyball tournaments.

“You have to be very disciplined about time management,” said Grimes, who has to balance cheering with school, working part time, and taking care of her son.

For Grimes and all the ASU cheerleaders, the days are especially busy during Magic City Classic weekend. In addition to cheering at the game, the squad participates in the parade, cheers at the official Classic Kickoff, and gets the crowd pumped at special breakfasts and lunches planned for the weekend. They also host a pep rally at a local elementary school each year.

Along with balancing their busy class and cheer schedules, ASU cheerleaders must weigh the age-old ASU-AAMU rivalry with the friendships they’ve forged with AAMU cheerleaders.

“There’s definitely a lot of trash talking,” both on and off the field, Hartley said. “Trash talking happens throughout the year, but it’s at its worst during the month of October.”

The ASU and AAMU cheer squads are even known to have dance battles during Classic weekend. And when it’s time to battle, friendships have to be put on hold.