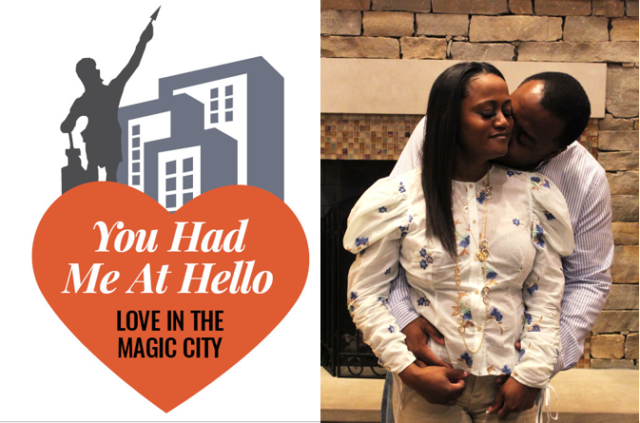 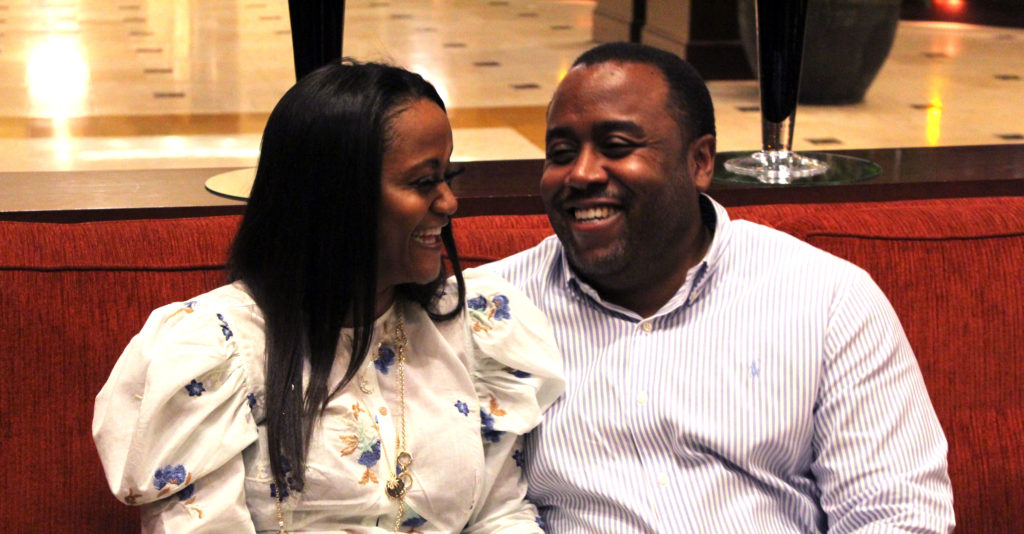 Met: Eric and Tamekia met in August 2001 at New Life Church of God in Christ in Montgomery, Ala. Eric, an associate pastor at his family’s ministry, was giving a sermon that resonated for Tamekia. “He was preaching a sermon at an evening service talking about rejection and daddy issues . . . so after service, I boldly went up to him and told him I really enjoyed his sermon.”

Eric recalled seeing “the cute usher” in back of the church and asked his cousin who she was. Two weeks after their initial meeting, Eric had the opportunity to make conversation with her in the church lobby that Sunday after service. The two would go on to hold many conversations and Tamekia admitted “I found myself wanting to talk to him more and more, and not just about my issues…I was attracted, I wanted to talk to him all the time.

First date: Valentine’s Day 2002, at a Steak n’ Shake in Montgomery. “He lived in Birmingham, so on Valentine’s Day, I sent him a balloon bouquet at work and he was in a meeting when [it got delivered] and everyone was rooting him on… That made him come down to Montgomery to see me,” Tamekia said.

“I’m normally the one to do things for people, and so it was thoughtful to me that she thought of me, and to send those balloons on V-day,” Eric said. “I had already made purchases prior to that that I planned on giving her when I went to Montgomery that weekend . . .I asked her where she wanted to go, and of all places, she chose Steak n’Shake.”

Tamekia said the whole night “felt right. The more we talked, I saw he was a real gentleman, he came across as very strong and confident and that’s what I was lacking from other experiences,” she said.

Eric said, I hadn’t really dated in 7 years. I was focused on ministry… I felt a connection, I was interested in her, I didn’t know how far the relationship would go, but I liked not only looking at her, but I liked being around her as well.

The turn: “It got serious for us on Valentine’s day because that night she asked me to define the relationship,” Eric said. “So, that night we decided that we wanted to spend time together and really get to know each other exclusively. We would spend the weekends dating with our daughter Nyla (from Tamekia’s previous relationship who was then 3) and getting to know each other.

Tamekia said “a month or two later I was laying in my bed and The Holy Spirit said ‘Eric is your husband’ and I was like a pastor really? But ok, this is good. I was a girl that liked “the bad boy”, and this was a professional dude and an all-around great guy… This was the most consistent man I’d ever dated, every Friday when I got off work he was sitting in my driveway. I never saw myself being a preacher’s wife, but then it settled in my spirit.”

The proposal: June 8, 2002, at Shakespeare Festival Park in Montgomery

Eric said that he talked with her mom and let her know that he wanted to have Tamekia’s hand in marriage before proceeding.

“We went to an Italian restaurant (Macaroni Grill) and had dinner, and then [afterward] we went to the park to walk and talk, that’s something we always did,” he said. “We were walking and talking and stopped by the lake and sat down on the stairs and she sat in front of me, and while she was sitting in front of me I reached in my pocket and pulled out the ring then got down on one knee and asked her would she marry me. She couldn’t believe it at one point, she started tearing up and she said yes.

“It was very romantic,” Tamekia recalled. “I remember and we sat outdoors for dinner and were just gazing at each other, and he was like, ‘ok let’s go to the park (he knows I love the outdoors).’ And I had no idea this dude was about to propose,” she said.

The wedding: New Life Church of God in Christ in Montgomery. The wedding colors were champagne and platinum and the ceremony was officiated by Senior Pastor Terry Ellison.

Most memorable for the bride was receiving a love note from her groom. “I was in the back in the dressing room getting dressed and I get this note, and it was the sweetest thing. He had it passed to me through my brother, and I was like ‘oh, this is the sweetest man in the whole entire world’, Tamekia said.

Most memorable for the groom was seeing his bride walk down the aisle.

“When the doors opened and the song that she had selected started playing and I saw her coming down the aisle…she was so beautiful and I felt like “you the man”, I was about to spend the rest of my life with this beautiful woman,” Eric said.

The next morning the couple left for their honeymoon, they cruised to the Bahamas.

Words of wisdom: “Unconditional love is the greatest asset in marriage because when two people come together, they’re two different people,  you’re making two people one, it’s a union. A lot of times you won’t see eye to eye, but you gotta learn how to compromise and walk in love,” Tamekia said. “Prayer and communication too. With us, we don’t stay mad long, and we actually don’t get mad a lot, but when we do, we don’t stay mad. When I look at him, he melts me…”

Eric said, “Never stop laughing, Even the Bible says laughter is the best medicine. Sometimes it’s the simple things…always find time to laugh and have fun. Both of us have a good sense of humor, so when one of us is mad, the other will say something or do something silly and we’ll both burst out laughing,” he said. “And we’re both not afraid to say I’m sorry and move on. Even if we feel the other person was in the wrong, we’ll apologize and move forward.”

Happily ever after: Tamekia, 44, is a Montgomery native, and Jefferson Davis High School grad. She attended Troy University, where she earned a Bachelor of Science degree in marketing management and research. She works as a customer service rep at the Alabama Housing Finance Authority and also owns an online boutique called ‘God’s Finest Apparel and Accessories’ [website: www.gods-finest.com].

Eric, 43, is a Forestdale native and Minor High School grad. He attended Alabama Agriculture & Mechanical University [A&M] and earned a Bachelor’s of  Psychology degree, and his Master’s in Leadership and Management from Amridge University, He works as a Lead Business Analyst for ‘1 Sync Technology’, and is the Pastor at River of Life Ministries in Homewood. 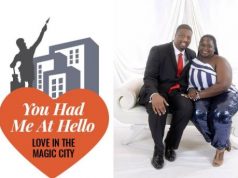 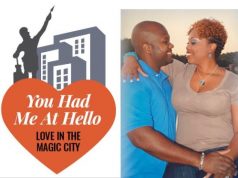 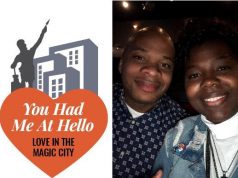