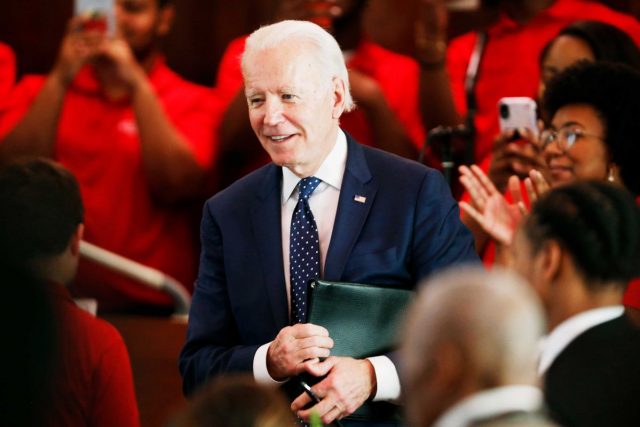 With an overwhelming majority of black votes, former vice president Joe Biden on Tuesday convincingly won the Alabama Democratic primary for president, according to preliminary results from the Associated Press.

With 99 percent of precincts reporting, Biden had 286,630 votes, or 63.2 percent. Independent Vermont Sen. Bernie Sanders was in second with 75,326, or 16.6 percent, followed by ex-New York City Mayor and billionaire philanthropist Michael Bloomberg, who dropped out Wednesday, with 52,844, or 11.6 percent.

Bloomberg announced that he was supporting Biden who swept all the Southern states that cast ballots in the “Super Tuesday” contests, named because of the large number of delegates at stake.

Biden carried the state after a weekend appearance for an event commemorating the 55th anniversary of “Bloody Sunday” in Selma. His campaign was helped by a number of high-profile endorsements including Sen. Doug Jones, D-Ala., U.S. Rep. Terri Sewell, D-Birmingham and Birmingham Mayor Randall Woodfin. The former vice president picked up 40 delegates in Alabama, Sanders, seven delegates and Bloomberg three.

Biden’s strength among black voters was reflected in Alabama exit polling which showed the former vice president with 76 percent of voters 65 and older and 72 percent of black voters, who represented 44 percent of Alabama Democratic primary voters.

It was the second time in less than a week that the African American vote bolstered Biden. In the South Carolina primary a majority of black voters helped Biden to a resounding victory, which seemed to invigorate his campaign. He was undoubtedly helped by and endorsement from Rep. James Clyburn (D-S.C.), the highest-ranking African American in Congress, ahead of the South Carolina primary.

African American voters also pushed Biden to victories in Virginia and North Carolina, where he was also declared the winner just as polls closed Tuesday.

In Alabama, Biden also had the largest share of both white — 51 percent — and non-white — 69 percent — voters, and won every age group except younger voters. Sanders captured that age group with 60 percent to Biden’s 21 percent.

The former vice president also won majorities among all education levels. He won 62 percent among voters without a college degree, 63 percent who attended college but did not have a degree, 60 percent of voters with associate’s degrees, 51 percent among those with bachelor’s degrees and 61 percent with advanced degrees.

Biden’s victory in Alabama was one of his five wins in a Southern state on Tuesday; he was also declared the winner in Virginia, North Carolina, Tennessee and Virginia.

Alabama voters on Tuesday handily turned back Amendment 1, which would have ended the election of State Board of Education members.

Nearly 75 percent voted against the amendment, according to incomplete, unofficial results. In Montgomery, more than 25,000 voters opposed the change. Calhoun County was the only Alabama county that leaned toward approval of the amendment. With 15 of 44 counties, 59 percent approved.

Legislators approved putting Amendment 1 on the primary ballot in May, with the measure sponsored by Senate President Pro Tem Del Marsh, R-Anniston, and later praised by Gov. Kay Ivey.

Alabama is one of 11 states and the District of Columbia that elect state school boards.

Of the more than a dozen voters interviewed around central Alabama and eastern Alabama on Super Tuesday, only one expressed support for the amendment.

“Amendment One was a bold and ambitious effort to transform our state’s public schools. Governor Ivey was willing to step out and support this idea because she firmly believed leadership – and change – started with the Board itself. Tonight, however, it appears the fear of losing the right to elect our State School Board members was greater than the confidence we had that fundamental change could be made. While disappointed, the governor’s resolve to improve our public education system remains intact. Amendment One is not where her plans for education stop, and you’ll see her continue to be more innovative and creative with her approach to improving Alabama.”

AL.com, The Montgomery Advertiser and Associated Press contributed to this article.