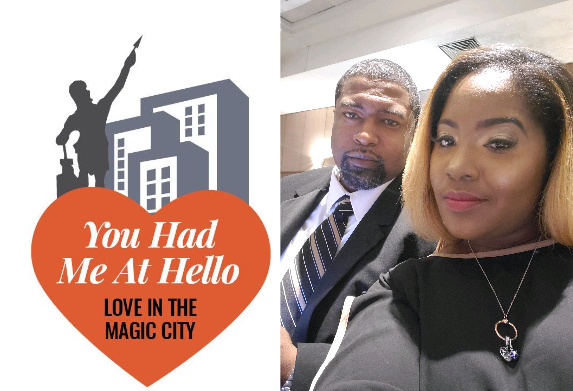 Met: 1996 at West End High School in French class during their freshman year.

Brandie recalled what attracted her to Daris on the first day of school. “Roll was being called and he answered and it was the most manliest voice in the world,” Brandie laughed, “and I turned around and it was [Daris]. He was attractive, and I thought to myself ‘I would like to get to know this guy… I stepped outside my comfort zone and introduced myself…. I asked him then if we could ‘talk’. I really meant dating, and he just thought I meant [conversing]. It didn’t really work out the way I planned.”

Daris said he wasn’t under the impression that they “went together.”

“I’m a freshman starting on the varsity football team, and thinking I’m single,” Daris laughed. “I’m [conversing] with a few [different girls] and this one upperclassman I was trying to talk to said, ‘I thought you went with that Brandie girl’ and I was shocked.”

Daris said he found Brandie in the cafeteria and asked her why she was telling people “we go together?”

“Because we do,” she replied. “I asked you if you wanted to talk.’” For me “let’s talk” meant “conversate, it don’t mean we go together,” Daris said.

But that changed a couple months later when Daris saw Brandie at school sporting a more mature look, wearing a flattering dress and flowing tresses. “And I thought, ‘oh my, I need to pick that conversation back up,” Daris laughed.

First date: Valentine’s Day 1997, at the Wildwood movie theater on Lakeshore Dr. Brandie said they were supposed to see a movie “but never made it inside.”

“We were dropped off by my older sister and were sitting on some steps in the shopping center killing time and waiting for the movie to start, but then he started making moves on me,” Brandie said, “we never made it inside.”

“That hair was down her back and she was looking very enticing like a tray of chocolate covered strawberries, I couldn’t help myself,” Daris said.

The turn: By 1999, the pair had transferred to Ensley High School and it was their senior year. “We were actually broken up at the time, and everybody magically left the cafeteria and somehow it was only me and her in there, not even the cafeteria workers were there. I remember it like it was yesterday, she said these words to me ‘with everything around you, as you can see it’s only us in here. Whether we’re together or [apart], whether you’re up or down, no matter what, I will always be here for you.’ And then she walked away like it was the end of [a movie] scene. I said [to myself] this is a special woman,” said Daris, who realized Brandie’s feelings and commitment to him ran deep.

The same year, Brandie, then 17, had a God given vision that declared Daris would be her husband, she said.

“In the vision, I saw him walking down the hall at school with a group of kids of all ages behind and beside him…he was mentoring them, and I heard so clearly ‘that’s your husband’.  … we had been broken up for eight months at the time [of the vision] and it was the longest we had ever been apart so I didn’t think it [marriage] was possible. But prophetically, it came to pass. We’re married and he mentors and helps kids,” Brandie said.

The proposal: In 2001 at Daris’ mother’s house in Central Park. Daris and Brandie were together on a date, and Daris said he had to make a quick detour at his mother’s house.

“It was my junior year in college at [Tusculum University, Greensville, Tenn.]. I came home from school [on holiday break], and I said I need to stop by my mom’s house for a second. I let her walk in before me, and when we got inside I stopped and got down on one knee and told her how much I loved her and asked her would she spend the rest of her life with me. I asked her to marry me and she said yes,” Daris said.

Brandie said she was surprised, “I had no idea he was thinking about proposing at this point in time because he was still away in college. I got emotional and I cried… It was one of the best moments of my life because I knew I loved him and honestly could not see anybody else in my life but him.”

The wedding: At Brandie’s great aunt’s house in West End. It was officiated by Pastor Willie B. O’Neal, of Mt. Canaan Full Gospel Church in Wenonah, and their colors were baby blue and black.

Most memorable for the bride was the prophecy being fulfilled.  “The ‘I do’s, I cried after saying our vows because I knew it was official and was really happening…he became my husband,” Brandie said.

Most memorable for the groom was somebody dropped the wedding cake. “We were getting ready for the reception and asked when they were going to bring the cake out and that’s when we were pulled to the side and told our cake got dropped. I wasn’t happy,” Daris said.

Words of wisdom: “No marriage should be taken lightly. It’s definitely a commitment and a vow you not only made to each other but to God,” Brandie said. “ . . . always keep God in the center because anything and everything will come in and try to disrupt it, and if it’s not strong enough to withstand, it won’t last. You also have to be patient with each other. Don’t be afraid to admit faults and understand that you’re two separate individuals from two separate families. But if you have God at the center, you can build together. Don’t give up on what God has put together.”

“There has to be a commitment to sticking it out together,” Daris said. “And if you’re looking at marriage as an individual and not willing to wield your rights, then your marriage won’t work. You have to be willing to take failures within a marriage, but remain committed to growing with one another.  Focus on God and allow God to fix whatever you feel may be wrong with the other person, and work on yourself . . .look at our own faults. Work on yourself to be better for [your spouse] and remain committed to your vows.”

Brandie, 37, earned an associate’s degree in computer aid and visualization from Virginia College in Birmingham. She also recently launched Creative Beauty LLC, a platform for poets and artists to showcase their work.

Daris, 38, earned a B.S. in Sports Management from Tusculum University [Greensville, Tenn.], and operates a personal training brand called ‘Spade Nation’, where he specializes in athletic development and athletic mentorship for people of all ages. He also works full-time for an environmental company.