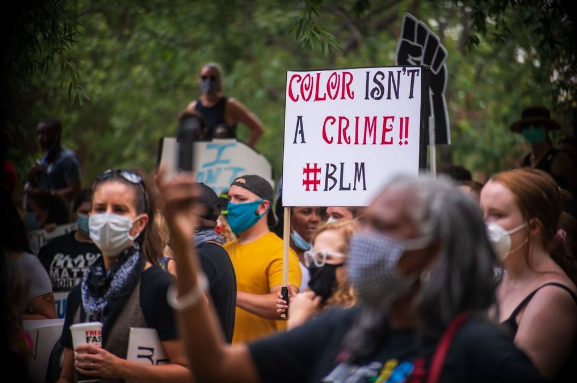 (Second of two parts on fight against racial injustice from Birmingham)

For local activist Erica Robbins, 38, the fight for social justice is bigger than her. It is for her son, 12-year-old Aiden, and future generations.

“It’s not fair. He deserves the same chances as everybody else’s child who doesn’t look like him,” Robbins continued. “He needs to be the author of his own story and not let hate and white supremacy and the history of that determine his future.”

With the recent wave of Black women and men killed by police—Breonna Taylor in her Louisville, Kentucky, home in March; George Floyd on a Minneapolis, Minnesota, street in May; Rayshard Brooks in an Atlanta, Georgia, parking lot in June—demonstrators around the world are saying “No More!” That sentiment is no different here in Birmingham, where activists fighting for change want to make it known that Black lives matter.

Robbins is the director of Be a Blessing Birmingham, and she—along with DeJuana Thompson, 37, founder of Woke Vote; Martez Files, 29, co-founder of When We Fight along with Shante Wolfe and Amber Haywood, and a co-founder of Black Lives Matter Birmingham; Onoyemi Williams, 44, community organizer with Birmingham Peacemakers; and local activist T. Marie King, 40—is among the many movement leaders who have been on the front lines in the Magic City.

In several interviews with The Birmingham Times over the past month, these long-time activists say this moment following the death of Floyd, which sparked global outrage, may be different than what has been seen in recent protest movements when it comes to racial injustice.

“I think some of that is because we were on lockdown because of COVID-19 and many people were without jobs; almost everybody was at home; there were no social gatherings, no clubs, no events. So, folks were forced to pay attention to things in ways they’ve never had to pay attention before,” said Files, a graduation coach for (GEAR UP) Alabama, a U.S. Department of Education program that aims to significantly increase the number of students who attend and succeed in postsecondary college.

Those factors coupled with “… the fact that the slaying of [Floyd] probably represented a shift in the way we understand policing in America,” added Files, a former adjunct professor at the University of Alabama at Birmingham (UAB). “I think this is one time when folks were able to pay attention to what Black folks have been saying since [the killing of] Trayvon Martin.”

Martin was a 17-year-old African American boy fatally shot in Sanford, Florida, by George Zimmerman in 2012. Martin was walking back to his home when Zimmerman, a member of the community watch, saw Martin and reported him to the Sanford Police as suspicious. Several minutes later there was an altercation during which Zimmerman fatally shot Martin in the chest.

King said simply that Blacks and whites are fed up.

“We Black folks are tired of seeing our sons, brothers, nephews, daughters, nieces, and friends murdered and no one being held accountable,” she said. “Our judicial system is saturated with racism, and it needs to be dismantled and rebuilt with the community, especially with Black people, at the table. I also appreciate that young organizers and protestors are putting their bodies on the line in an effort to be allies and stand in the face of injustice.”

She also pointed to the horrific way that Black people have been killed.

“I think what makes this moment different is that there is no way to ignore the callousness of the officer who so nonchalantly kneeled on Mr. Floyd’s neck for eight minutes and forty-six seconds. He looked in the eyes of America and said, ‘And what?’ That officer challenged America, especially Black America, and we stood up. More and more [Blacks and whites] are standing up every day. We are seeing an uprising take place, and we are collectively coming for our just due,” King said.

Thompson said this is not merely a “hype moment.” The number of appalling deaths of African Americans at the hands of police over such a short period of time has triggered a response from nearly everyone.

“When these kinds of things happen, you have to seize the moment and draw some lines in the sand [delineating] what kind of people we want to be, what kind of leadership we want to have, what we want to fight for—and, in that moment, you have to stand up,” she said. “There is a larger platform for individuals who have been doing this work to be heard in this moment.”

Williams pointed to the timing of the killings.

“It’s not that it hasn’t been happening. It’s not that this is an anomaly. It’s just one of those perfect storms that created a situation that turned out to be something prolific,” she said. “How many young black men have been killed and the police report and investigation were completely skewed? How many times have we seen people killed and the police report [indicates that the people killed by police] were resisting? It’s not a new conversation for those who live in [predominately black] neighborhoods. … It’s not a new conversation for our community. It’s just one of those situations in which a few more people are actually listening and the evidence in the Floyd case just could not be denied.”

Can this moment lead to change?

Files said, “I think this is one time when folks are really embodying the notion that if we don’t get justice, you won’t get peace. I believe people are willing to commit to civil unrest in ways they haven’t been able to do before, so I do believe some significant changes will happen.

“We’re seeing small, incremental changes at this time, like adopting the Eight Can’t Wait campaign, which is being marketed as a way to reduce police murder by like 70 percent. … I’ve seen cities willing to adopt this proposal in ways they would not before. That campaign is not revolutionary or drastic, and I don’t know if it is going to lead to the type of revolutionary change that people doing this work want to see, but I do know that incremental change is going to happen for sure—and it is happening.”

Eight Can’t Wait is a campaign to bring immediate change to police departments across the country via policies designed to reduce harm caused by police in the short-term.

Change is based on how you define it, Thompson said: “If you don’t put any true definition or set any goals around that [change], it can be empty. For me, do I believe that we are going to see policy changes? We’ve already seen policy changes.”

For example, following the outcry around the death of Taylor, the Louisville Metro Council unanimously passed the measure known as “Breonna’s Law,” which bans the use of no-knock warrants that had allowed police officers to enter a residence without warning or without identifying themselves.

Change may not happen overnight, but Robbins said she and others are committed to putting in the work until change does happen.

“Every time we make a little headway or progress, [people in power] turn right around and do the same things, so we have to have policy change by people in power that look like us and think like us,” she said. “Even if they look like us, they still have to think like us, and just because they look like me doesn’t mean they have my best interest at heart or the betterment of my people at heart. Right now, we’re working on policy changes, making sure people get out and vote for the right people, making sure the right people are elected, and, once they are elected, holding them accountable.”

“National elections are great and fine, but local elections matter more,” she said. “We have to make sure we have people who are [working] in our best interest at City Hall, at the [local] courthouse. … We have to make sure people are educated about the people they are putting into power, making sure they know how they think and their views on different issues. … If we don’t tell people, they don’t know.

“A lot of people vote by name recognition, [choosing candidates] not because they’re the best candidate but because the name sounds familiar. We have to do better at making people informed voters. Informed voters are scary to bad politicians,” she said.

“We need to find candidates who speak to the core of our issues and who really believe we deserve more livable and loving communities—and we need to get those folks in positions of power,” he said. “We need to replace city leaders with folks who are really our people, … grassroots folks we’ve seen on the ground, doing the work, and being committed.”

One of the more controversial policy changes, for some, is defunding the police. Birmingham city officials have said defunding the police department is a not good idea and the measure could cost lives. Chief Patrick D. Smith told The Birmingham Times last month that law enforcement needs to be “re-funded,” he explained, to provide improved training that will enable officers to better serve citizens.

Some local activists believe, however, that the city should still consider redirecting funds from the Birmingham Police Department’s $92 million budget to other social services.

“We need officials to reconsider the way money in the budget is being [allocated]. We want more money behind community programming; mental health opportunities; job readiness and job skills programs; arts and educational opportunities for our students; cleaning up our streets; and providing loans for small businesses,” he said.

Thompson said redistributing some of the money earmarked for police to community programs is a better, more effective use of resources that can “increase people’s ability to live a better life.”