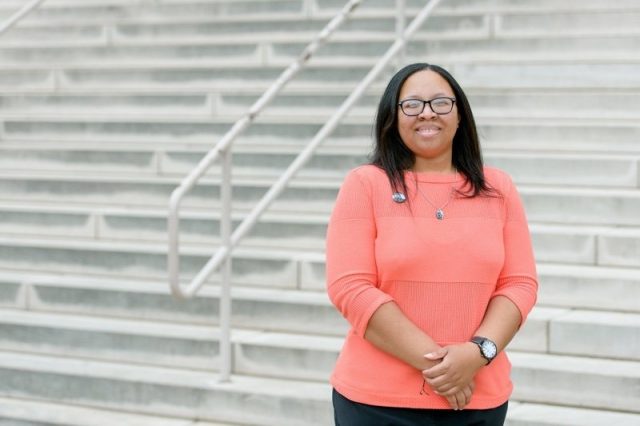 As our national temperature continues to rise over racial issues, the Levite Jewish Community Center (LJCC) recently hosted a Zoom seminar with one of Birmingham’s most prominent African-American activists and race discussion facilitators, T. Marie King. The session centered on how to help parents talk to their children about race.

About 70 parents and a few grandparents participated in the hour-long program which was highlighted by King sharing six recommendations to help her mostly white audience have such conversations with their children.

King, an experienced race discussion facilitator who is widely known for her work locally and nationally, combines a forthright and probing speaking style with introspection, deep intelligence and a capacity for listening to others and not passing judgment.  She urged participants to be honest and to ask any questions they would like — and she was successful on both accounts.

LJCC Executive Director Samantha Dubrinsky, whose family is bi-racial, helped frame the discussion.  Dubrinsky also talked with pride about the LJCC’s commitment to diversity and it being a safe place for people of all faiths, races and backgrounds.  She asked King what more the LJCC could do to advance race relations in metro Birmingham?

King, who has worked with Jewish leaders and who is admired and trusted, suggested that the Jewish community, through its well-known institutions such as the LJCC, should vest itself even more in the nitty-gritty and building blocks of racial harmony and equity, through programs such as the one being sponsored that evening.  She also said sometimes it’s simply a matter of the Jewish community making resources available — such as meeting space — for the kind of workshops and dialogue sessions that King facilitates.

As King moved into her review of her six key “tips” for parents, she emphasized, “Our children are never too young to start learning about these things. Be brave as we go through tonight’s conversation together.”

The first thing King urged parents to do was “ground yourself in truth” — to be honest with themselves and their children as to how America has gotten into the racial predicament and unrest it faces today. She also suggested, however, that parents should strive to develop the skills to explain things on levels that children can process and understand, knowing that young kids in particular are not ready or able to grasp some of the more heinous and graphic episodes in our country’s history.

The second thing she urged dealt with language.   “Use the words — race, racism, bias, discrimination — become comfortable with them,” she said, so that parents can talk to kids comfortably about these realities without shying away from such words.

Moving to point number three, she told parents, “You’ve got to start early.”  She said that kids see differences among people, particularly among peers, and that parents and children should talk about them and “embrace them in a healthy way.”  When it comes to the external ethnic, racial and religious differences among kids, “instill healthy acceptance” she urged, rather than shying away from talking about these differences.  Tell your children, “It’s okay to see color, but that regardless of a person’s skin color, they should be treated fairly.”

“You have to practice what you preach,” was tip number four.  “Your children are watching you — everything you do.”  She said this is often how kids learn, either in a positive or negative way.  “Know your biases,” she urged the group, calling on parents to do all they can to not allow their prejudices to result in sending negative messages about others to their children.

Regarding point number four, she also urged parents to “expand your circle” — to look at your friends and ask yourselves if you are modeling inclusion and acceptance of a diverse group of people.  Additionally, she said, let your kids see you “stand up for injustice.” She also cautioned parents to be on the lookout for media and cultural messages that create negative pictures in their children’s minds and to strive to correct those impressions.

Regarding point number five, King told the parents to encourage questions from their children — to create a family environment where kids feel safe enough to ask about anything that is on their mind, particularly when it comes to differences among people.  And, she told the parents, “It is okay to say ‘I don’t know but we will figure this out together.'”

King also encouraged parents to take their children to places, such as the Birmingham Civil Rights Institute, that will “encourage discussions,” noting that she took her nieces and nephews, who live in Washington, DC, to the US Holocaust Memorial Museum.  The goal she said is to introduce our young people “to the uncomfortable parts of our history” and encourage honest, open and safe discussion through which important lessons about discrimination, bias and hatred can be taught.

Her sixth and final point was for parents to “embrace empathy.”  To live lives that reflect kindness and fairness to others — in other words, “how to look out for one another.” This will create an impact and lasting behaviors among your children, she said.

“If you do these things,” King emphasized as she finished her six points, parents can create a foundation for teaching their children about the importance of people of different races, faiths and ethnicities getting along and respecting one another, so that we all can benefit from a more harmonious world.

All of this is especially important right now, King added, alluding to the racial unrest that has recently plagued our country.  “Two months ago, I would have said we were in a moment — now I believe that we are in a movement.”

Looking out on the Zoom call audience, which was mainly made up of parents of children of pre-kindergarten age, King ended with a powerful yet simple statement:   “I don’t want your babies fighting these battles 50 years from now.”

Friedman is Associate Editor of Southern Jewish Life for which this story was written.