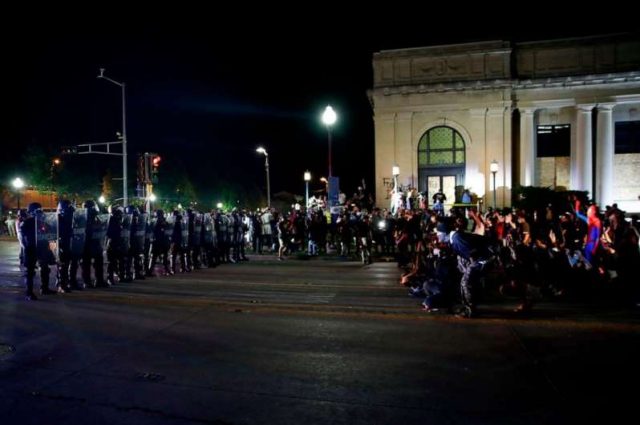 At least three people were shot during the protests overnight in Kenosha, some 40 miles south of Milwaukee, and two of the victims died from their injuries, according to the Kenosha Police Department. The third gunshot victim was taken to a hospital with “serious, but non-life-threatening injuries,” police said.

The violence prompted President Donald Trump and Wisconsin Gov. Tony Evers to mobilize additional members of the National Guard to Kenosha. The Kenosha Police Department and the Federal Bureau of Investigation are investigating the shooting.

Cellphone video showed a white man armed with what appeared to be a semi-automatic rifle running past police and being chased by demonstrators. The footage showed the man trip and fall and appear to open fire on demonstrators. He then is seen running away.

The alleged gunman was arrested Wednesday in Antioch, Illinois, police said. He was identified as 17-year-old Kyle Rittenhouse and is expected to be charged in Kenosha County with first-degree intentional homicide, police said.For the second straight day, the mother of Jacob Blake Jr., the 29-year-old man shot seven times in the back by at least one Kenosha police officer, pleaded with protesters to refrain from violence.

“For anyone who is doing anything that is violent or destructive, please stop,” Blake’s mother, Julia Jackson, said in an interview Wednesday with ABC News. “I get your pain. I get your frustration. This is nothing new and it’s not just about my son, I get that. But please find another way.”

As curfew began in Kenosha at 8 p.m. local time Tuesday, police could be heard warning people to move away from the Kenosha County Courthouse where demonstrators had gathered.

A state of emergency was approved by the Kenosha Common Council on Tuesday afternoon, which will remain in place until Friday, according to Milwaukee ABC affiliate WISN.

The protests were in response to the shooting of Blake, who remains hospitalized in serious condition.

Cellphone video taken by a witness on Sunday evening showed three Kenosha police officers following Blake around his SUV and at least one of them is seen shooting Blake multiple times in the back as he opened the driver’s side door and entered the vehicle, where his three young children were still inside.

Jackson told ABC News that she watched the video for the first time early Wednesday morning. She said her son’s fiancee, Laquisha Booker, who witnessed the shooting and claimed officers threatened to shoot her, too, has offered to go over details of what she saw.

“We talked, I think it was last night, and I told her I’m not ready to hear the details right now,” Jackson said. “I just want to focus on him and the children being better.”Prominent civil rights attorney Benjamin Crump, who is representing the family, told ABC News that family members are calling for the officers involved in the shooting to be terminated from the police force and charged with a crime.

“We believe based on the evidence, based on that video, probable cause exists to arrest and charge the officers with attempted murder,” Crump said.

“Where is humanity? Where is the professionalism? Where is the training?” he added. “Why is it again that we’re seeing another African American who the police are supposed to protect and serve like anybody else use this brutal, excessive force?,” Crump said. “It was done in front of his three little boys… who were all sitting in the car. Eight years old, five years old, three years old. Can you imagine the psychological issues these babies are going to have?”

The officers involved in the shooting have been placed on administrative leave and their names have not been released. The Wisconsin Department of Justice Division of Criminal Investigation is leading the probe into the incident.

Kenosha County Sheriff David Beth warned protesters Tuesday night that the destruction would not be allowed to continue. He also said that while many are peacefully exercising their First Amendment rights, people from “outside” the community are coming in, looking to loot and cause destruction.

“If you want to protest peacefully, by all means go out and do it. It’s your right. But don’t be a part of this destructive force that’s burning our community. That’s not a productive path to justice,” Beth said in a statement. “We are not sitting idly, watching the destruction of our community. We’re making every effort to make it stop, and I hope you will too.”

On Wednesday afternoon, President Trump tweeted that he is sending federal law enforcement and the National Guard to Kenosha “to restore LAW and ORDER!” He said the decision came after staff spoke with Gov. Evers, a Democrat, whom the president said agreed to accept the federal assistance.

Trumps tweets came shortly after Evers released a statement saying he had authorized 500 members of the Wisconsin National Guard Wednesday night to Kenosha County to support local law enforcement after being asked to do so by local officials.

“We cannot forget the reason why these protests began, and what we have seen play out over the last two nights and many nights this year is the pain, anguish and exhaustion of being Black in our state and country. But as I said yesterday, and as I’ll reiterate today, everyone should be able to exercise their fundamental right—whether a protester or member of the press—peacefully and safely,” Evers said in a statement Tuesday. “We cannot allow the cycle of systemic racism and injustice to continue. We also cannot continue going down this path of damage and destruction.”

The Kenosha County Board of Supervisors sent a letter to the governor on Tuesday requesting more National Guardsmen and other assistance from the federal government.

“We are respectfully requesting that you contact President Trump and solicit a least an additional 2,000 National Guardsmen to supplement our Kenosha law enforcement agencies,” board members wrote in the letter. “In addition, please request President Trump help Kenosha by enacting additional tools, such as low interest SBA loans and FEMA funds, to help rebuild local businesses hurt by the domestic terrorists.”

During an emotional press conference in Kenosha on Tuesday afternoon, where Blake’s mother, father and three sisters were in attendance, one of the family’s attorneys, Patrick Salvi Jr., said Blake was shot seven times at point-blank range in the back. Salvi said at least one bullet tore through his spinal cord and other shots damaged his kidney, liver and arm.

Crump, who’s also representing Blake, said his client was attempting to de-escalate a domestic incident when police drew their pistols and stun guns on him. Crump said Blake was walking away to check on his children when police shot him.

Blake’s family said he is currently paralyzed from the waist down but that there’s hope the paralysis is temporary.

“I’m not a doctor but what they’re saying is that the inflammation was challenging to his mobilization, being mobile, and that they’re hoping that when the pressure reduces and things go back to normal within his body that he will be able to move again with his lower legs,” Justin Blake told ABC News in an interview that aired Wednesday on “Good Morning America.”

Justin Blake said he hasn’t been able to see his nephew yet, as only the parents have been in the hospital room. He said he spoke to Blake’s mother recently who reported that he is still in “a lot of pain” as he had just come out of surgery and isn’t out of the woods yet but is “doing better.”Despite his condition, Blake has been the one trying to comfort family from his hospital bed.

“That tells you what kind of man he is,” his uncle said.

Blake’s shooting has attracted a wave of national attention and has become part of the sustained wave of civil unrest protesting police brutality and systemic racism in the United States, which was reignited by the death of George Floyd in May.Following Tuesday night’s win over the Dallas Mavericks, Los Angeles Clippers coach Doc Rivers discussed why unarmed Black men continued to be shot by police.

“It’s amazing why we keep loving this country and this country does not love us back,” he said, fighting back tears. “It’s really so sad.”

Rivers said police need better training and police unions need to be “taken down,” but he said that doesn’t mean he hates police or that they should be abolished.

“My dad was a cop. I believe in good cops,” he added. “We’re not trying to defund them and take all their money away. We’re trying to get them to protect us, just like they protect everybody else.”