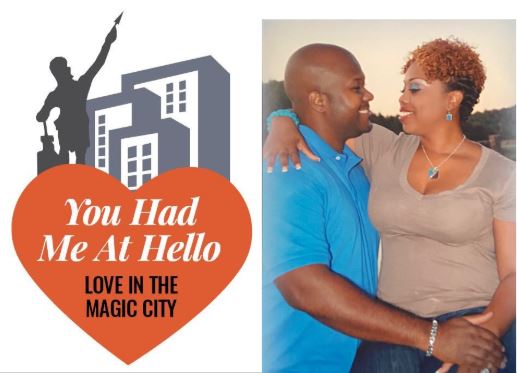 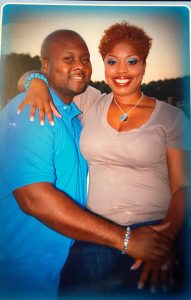 Met: Spring 2008, at The Worship Center Christian Church (Roebuck). “Every Sunday I would go to church with my best friends [when services were being held at the Ephesus Seventh Day Adventist Church in Smithfield] and I would see him come in every Sunday by himself, and I said ‘I’m going to marry that man’,” Candice said. “My friends said I willed it into existence [because] once the church moved to its Roebuck location, that’s where we officially met. I was going to go introduce myself, but my friend [Tamika Brown] went over to him and asked him if he was dating anyone because she had a friend that was interested in getting to know him…”

Darius recalled thinking that Tamika was asking about his dating status for herself, “but then she told me who the friend was and Candie came up to me and we exchanged numbers.”

First date:  The following weekend at Applebee’s on the Southside.

Candice said that she’s always been attracted to the way Darius looked but on the date discovered something she didn’t find appealing. “He’s is a loud eater I was thinking, for him to be this fine, he’s sitting up here smacking on this food like he ain’t never ate nothing before,” Candice laughed.

She also discovered Darius “has no filter . . . he was a little bit different from what I thought he would be like because I was thinking he was this reserved angel.”

Darius said he was attracted to her, the conversation was good, “but I thought she was a nerd,” he laughed. “She was more intelligent than I am… She’s real bourgeois, but it’s cute.”

“I had cooked him dinner and the next day I was on the plane headed to Chicago for a conference and we were on the phone talking, and he said ‘I guess we go together now’, and I said, ‘ok.’ Up until that point, we weren’t exclusive so that sealed it.”

Darius said he was sure she was the one after receiving “the king treatment she gave me for my birthday,” he said. “You can tell when somebody loves you and she loved me like my mama did.”

“I asked her father for her hand in marriage and then I proposed to her in their den in front of her parents and her two sisters,” Darius said. “I got down on one knee and asked her would she marry me, and she yes.”

Candice said she didn’t expect the proposal. “We [she and Darius] had been outside walking and then went inside and joined everybody in the den and started talking and having fun… I was standing in front of the fireplace and he just came and dropped down on one knee and asked me would I marry him,” Candice said. “I was caught off guard, it felt random, but I was happy and I said yes.”

The wedding: At the downtown courthouse in Birmingham. Candice wore a white dress and used the bouquet she’d recently caught at her best friend’s mother’s wedding. Darius wore black slacks and a black button-up.

“The clergy suggested we go outside and do it at [Linn Park] because it was nice out, so we did it in front of the fountain,” Candice said. “And since it was Breast Cancer Awareness Month, the fountain water was pink, and it reminded me of my grandmother. She was my best friend and it felt like she was there.”

Most memorable for the bride was taking their nuptials in Linn Park in front of the fountain and “feeling like my grandmother was there”, and having Tamika, who introduced her and Darius “stand next to me” while Darius’s brother, Donny, “stood next to him,” Candice said.

Most memorable for the groom was a moment of thankfulness while taking their vows. “I was looking in the trees and thanking God for blessing us with that moment and me with another chance at marriage. I had tears in my eyes and I felt so blessed,” Darius said.

The couple honeymooned on a cruise to Mexico. It was a wedding gift from Darius’s aunt and his father.

“The engine on the boat stopped working, so we didn’t get to do one of our stops because we actually had to float back home,” Darius said. “And I had horrible seasickness and was in the bathroom the whole time during the captain’s dinner [the welcome dinner that the cruise ship captain attends in the formal dining room along with the guests],” Candice added.

Words of wisdom: “The key is to keep God center of the marriage,” Candice said. “One thing that proved to be true about Darius is that he puts God first. If we’re having a problem, he’ll grab my hand and say, ‘let’s pray about it.’ We’re Christian and we’re going to take it to the Lord…  I’ve also had to learn to have thicker skin. He’s a man of few words, but brutally honest, so when it is time to talk about something, he tells it like it is.”

Happily ever after: The Prince’s have a seven-year-old son, Darius ‘DJ’ Prince.

Candice, 42, is an Atlanta, Georgia native and Redan High School (Stone Mountain, GA) grad. She attended Spelman College (Atlanta, GA), where she earned a bachelor of science degree in biology; The University of Alabama at Birmingham [UAB], where she earned a Master of Business Administration [MBA] in business, a Master of Public Health (MPH) in health care organization and policy, and a Ph.D. in Administration and Health Services. Candice works as an analytics consultant at Blue Cross and Blue Shield of Alabama and has been working from home since the COVID-19 closures in March.

Darius, 44, is an Ensley native and A.H. Parker High School grad. He attended Talladega College, where he earned a bachelor of science degree in business management. Darius is “blessed and retired” from Graybar Electric, a wholesale distribution business for electrical communications.

‘I was just ready to marry my best friend, the love of my life’