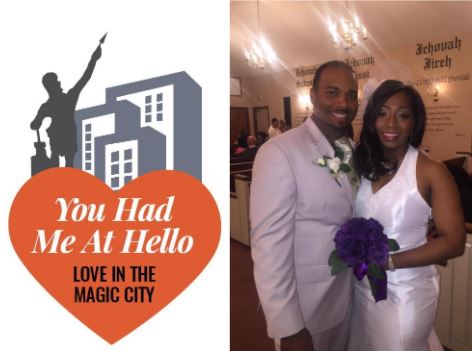 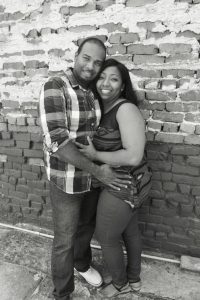 Met: September 22, 2012, over the phone. Travae had worked with Jay’s cousin [Shemeka] who was her intern at the Family Guidance Center [Homewood], and

Shemeka “thought that [Jay and I] would make a great couple because we were both good people, single, and had a daughter (from previous relationships) so she decided to hook us up,” Travae said.

Jay recalled Shemeka and his cousin Tony calling him about Travae and saying “she was super sweet and that I needed to meet her. I got [Travae’s] name and number, but first I looked her up on Facebook because I needed to see who I was going to be talking to,” Jay said. “…I just wanted to see what she looked like.”

First date: September 24, 2012, at Jay’s apartment in Center Point. Jay had extended an invite for chili. “When I got over there, I was shocked because he looked way better in person than he did in the picture,” Travae said. “After we ate and sat down in his living room, he asked me if he could play me a song he was practicing for church (he played the keyboard at  Miracles, Signs and Wonders International Ministries in East Lake). He played ‘Falling in Love With Jesus’, my favorite song… We talked all night, and I felt comfortable, like I’d known him my whole life. Travae said she felt so comfortable “at some point I got real hot and I took my wig off…,” she laughed.

“I [commented that] her hair was as long as the wig… and we just kept on talking like she was my cousin or something, like I’d known her my whole life,” he said. “She was very comfortable with me, and I was comfortable enough to share my chili and play my keyboard in front of her.”

The turn: Jay said he and Travae have the same birthmark, which he considered a sign from God. “Hers is on her left arm and mine is on my right arm, and when you put our arms next to each other they look identical. Mine is just a little bit bigger, but that was my sign to look at things with her closer.”

Travae said her first indication that Jay might be the real thing was what they had in common and how comfortable she was with him. Normally reserved and proper, she could literally let her hair down with Jay.

“Also watching his love for God when we would attend church together [at Love Fellowship Christian Center, in Adamsville] was a confirmation for me,” she said. “His interaction with his family, and he and my father also have all the same hobbies. I was grateful that they have a good bond.”

“We were at the house and I was thinking I was gonna miss out and lose her… I knew my feet were dragging [on proposing] and that night my heart was beating fast and I was thinking ‘should I ask?’.  And I just blurted out ‘will you marry me?’, and she said ‘yes’,” Jay said.

“I was not as excited as I should’ve been, I honestly felt like it had taken him too long, [three years] and I had made up in my mind that I wasn’t going to wait much longer because I wanted to make sure I stayed in right standing with God,” Travae said. “So I felt like it was delayed, but I said yes, because I always felt like he was the right one.”

The wedding: Love Fellowship Christian Center, in Adamsville, officiated by Pastor Rodney Standfield. Their colors were sage green and chocolate, with eggplant as the accent color.

Most memorable for the bride was her groom’s surprise serenade: “When he sang to me at the reception… He had told me that he wasn’t going to sing to me, but he ended up tricking me and sang John Legend’s ‘So High’…,” Travae said. “. . . it melted my heart. I really appreciated him doing that for me in front of all of our family and friends.”

Most memorable for the groom was pulling off the surprise serenade at the reception, and the look on his bride’s face.  “We had a whole trick set up, we had another guy on program as the person who was going to sing,” Jay said. “He had the mic, and said a whole little speech and when the music started, he stopped it and said I can’t do this, I think it would be better if Jay sang this song, and I acted all surprised [and hesitant] at first. Then I got the mic, it went exactly as I planned.”

Words of wisdom: “My number one thing is making sure you have God in your relationship,” Travae said. “A lot of people say that communication is key, but it’s not just communication, it’s comprehending. Meaning, you need to make sure that you are comprehending what each other are saying and the intent behind it. “As a couple set boundaries that you both agree upon and stick to them. That applies to everyone outside your marriage, including your parents, your children, and if you have a blended family, the other parent. Make sure you address any expectation that you have for one another, and don’t assume…”

The Griffith’s are a part of the marriage counseling team at their church and often couple’s fight against each other trying to be right, “but if you’re both on the same team, if I win, you win,” Jay said. “Also, counselors are not the enemy, we all need wise counsel, and sometimes it takes someone else to bring things out that you never would’ve thought to say.”

Travae, 32, is a Midfield native, and Dothan High School Grad [Dothan, Ala]. She attended the University of Alabama at Birmingham [UAB], where she earned a bachelor of arts degree in social work, and a master’s degree in marriage, couple, and family therapy. Travae works as a case manager for UAB under the Jefferson County Drug Court Program, and since the onset of COVID-19 works from home and goes into the office once a week.

She has also published a book called ‘Fanning the Flames’ available on Amazon or directly from her.

Jay, 42, is a Pinson native and Pinson Valley High School grad. He is a salesman for FleetPride, Tractor Trailer Equipment and his work schedule has remained the same during the pandemic, he said . . . “We have to keep the big trucks running for the economy,” he said. 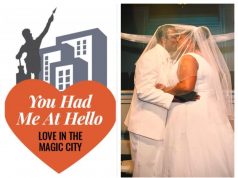