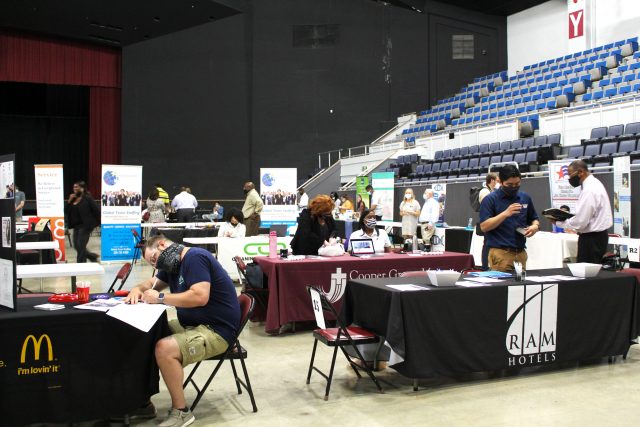 Darrion Sistrunk, a recovering addict, came to the Boutwell Auditorium in downtown Birmingham on Tuesday looking for a second chance. He found it.

Sistrunk joined dozens of others who either had trouble finding jobs or were formerly incarcerated and looking for work.

“I wasted so many years just [going from job to job] and just doing whatever I wanted to do, not really actually growing up and trying to be a man,” said the 24-year-old. “So, I’m at the point now where I’m just trying to stay focused on my career, focus on my future, better my life, better my living situation, [have] better relationships and just be more grown up.”

“What we’re trying to do is use our creative space as the DA’s office to do something people would say is ‘outside the box,’” Carr said. “The DA having a job fair for felons is not something that’s [common]…in order to…really change the narrative and conversation, you have to be willing to do things that are not normal, and this is not normal but it’s something that’s needed.”

Companies and entities in attendance included RCI Landscaping, RAM Hotels, Cooper Green Mercy Health Services and The City of Birmingham that wanted to interview and get applications from individuals and offer “real jobs that pay a real living wage that can change a person’s life,” Carr said.

Staffing companies such as The Onin Group were present as well. Jennifer McGilton, Regional Vice President of The Onin Group, said that hiring fairs not only benefit those looking for jobs, but companies as well.

Employers are struggling, to find people who want to go to work, she said. “The people that show up to [the job fair] want careers for themselves, and so those are the people we want to talk to. . .they want to change their lives.”

During her 20 years in the staffing industry, McGilton said she has worked with people who have needed a second chance and “they have realized that life is going to be a little bit harder and they take things more seriously…[and] they end up being some of our best employees.”

Carr said the fair comes at a good time “because there’s a conversation out there about people not wanting to work, but we wanted to distill that myth and show that there are people who want to work and want meaningful jobs.”

Like Sistrunk who was in the Boutwell for his first job fair with other people striving for a chance to show they wanted a chance to overcome their pasts.

“It’s a huge [confidence] builder,” he said, of meeting different companies. “The confidence level is…up simply from talking to the employers. So, I think it’s good not only for finding a job but people’s self-esteem because people want to work, people want to make money, people want…to be in a positive environment and get all those things than can lead to a better future.”