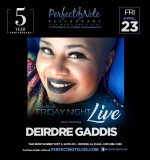 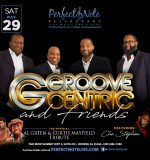 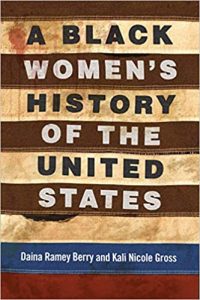 **BOOK: A BLACK WOMEN’S HISTORY OF THE UNITED STATES is written by DAINA BERRY and KALI GROSS. (Hot off the Press) A Black Women’s History of the United States reaches far beyond a single narrative to showcase Black women’s lives in all their fraught complexities. Berry and Gross prioritize many voices: enslaved women, freedwomen, religious leaders, artists, queer women, activists, and women who lived outside the law. The result is a starting point for exploring Black women’s history and a testament to the beauty, richness, rhythm, tragedy, heartbreak, rage, and enduring love that abounds in the spirit of Black women in communities throughout the nation. 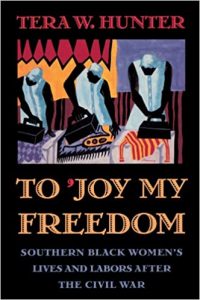 **BOOK: TO JOY MY FREEDOM: SOUTHERN BLACK WOMEN’S LIVES AND LABORS AFTER THE CIVIL WAR is written by TERA HUNTER. As the Civil War drew to a close, newly emancipated Black women workers made their way to Atlanta–the economic hub of the newly emerging urban and industrial south – in order to build an independent and free life on the rubble of their enslaved past. In an original and dramatic work of scholarship, Tera Hunter traces their lives in the postbellum era and reveals the centrality of their labors to the African-American struggle for freedom and justice. Household laborers and washerwomen were constrained by their employers’ domestic worlds but constructed their own world of work, play, negotiation, resistance, and community organization.
**BOOK: CLOSER TO FREEDOM: ENSLAVED WOMEN AND EVERYDAY RESISTANCE IN THE PLANTATION SOUTH is written by STEPHANIE CAMP. Recent scholarship on slavery has explored the lives of enslaved people beyond the watchful eye of their masters. Building on this work and the study of space, social relations, gender, and power in the Old South, Stephanie Camp examines the everyday containment and movement of enslaved men and, especially, enslaved women. In her investigation of the movement of bodies, objects, and information, Camp extends our recognition of slave resistance into new arenas and reveals an important and hidden culture of opposition. Camp discusses the multiple dimensions to acts of resistance that might otherwise appear to be little more than fits of temper. She brings new depth to our understanding of the lives of enslaved women, whose bodies and homes were inevitably political arenas. Through Camp’s insight, truancy becomes an act of pursuing personal privacy. Illegal parties (“frolics”) become an expression of bodily freedom. And bondwomen who acquired printed abolitionist materials and posted them on the walls of their slave cabins (even if they could not read them) become the subtle agitators who inspire more overt acts.
The culture of opposition created by enslaved women’s acts of everyday resistance helped foment and sustain the more visible resistance of men in their individual acts of running away and in the collective action of slave revolts. Ultimately, Camp argues, the Civil War years saw revolutionary change that had been in the making for decades. 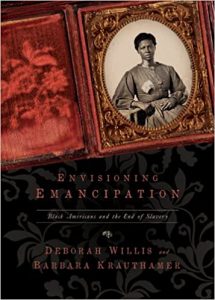 **BOOK: ENVISIONING EMANCIPATION: BLACK AMERICANS AND THE END OF SLAVERY is written by BARBARA KRAUTHAMER and DEBORAH WILLIS.
**Pizza Hut’s BOOK IT! Summer Reading Camp is Back – Pizza Hut is bringing back its summer reading program Camp BOOK IT! for a second year. The free, virtual camp is open to kids ages 4-12 and runs from June to August. Parents can track their children’s reading goals via a digital dashboard, and when kids meet their goals, they will receive a voucher for a free one-topping personal pan pizza from Pizza Hut. Sorry, grown-ups. This reading program is just for the kids. But if you’re feeling nostalgic for your childhood BOOK IT! days, Pizza Hut is selling vintage-style T-shirts with the retro logo for $10. Parents can sign the children up at: https://www.bookitprogram.com/book-it-for-parents.
FOR COMEDY LOVERS…
AT THE STARDOME COMEDY CLUB… 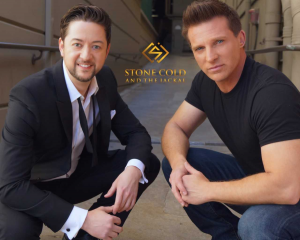 **TODAY… COMEDIAN STONE COLD AND THE JACKAL… Steve Burton and Bradford Anderson play the roles of Jason Morgan and Damian Spinelli on ABC’s soap opera, “General Hospital.” Fans love their unique friendship onscreen, but their real-life dynamic is perhaps even more entertaining. In addition to their successful podcast, “That’s Awesome”, Steve and Bradford are touring all over the country to the delight of GH fans everywhere. Join them for a 90-minute show full of music and comedy followed by a limited VIP photo meet and greet. Bring your own camera, no autographs.
**FRIDAY THROUGH SUNDAY… COMEDIAN KARLOUS MILLER…He has appeared in multiple television shows such as Hell
Date ,Yo Momma, Bill Bellamy’s Who’s Got Jokes, The Mo’nique Show, Off the Chain, Comic View, Last Comic Standing and Wild ‘N Out. Ultimately, Miller is known for his role in Wild ‘N Out and his notorious “wildstyle” battles with fellow alum Chico Bean. Partaking in a series of improvisational musical and comedic games Miller is praised for his comedic genius and witty punchlines. In October 2018, Miller confirmed on the Breakfast Club that he had been fired from the show, but eventually was brought back to the show at the urging of fans. Miller is a part owner of a podcast, the 85 South Show with his co-hosts DC Young Fly, Chico Bean and Clayton English.
**NEXT THURSDAY… COMEDY SHOWCASE…Check out the best of the best Birmingham and the surrounding area have to offer. You could witness a future star on the StarDome stage.
**NEXT FRIDAY THROUGH SUNDAY… COMEDIAN MARLON WAYANS…Marlon Wayans is an actor, producer, comedian, writer and film director. His films have grossed more than $736-million in domestic box office and $1-billion in global box office. As a stand-up comedian, he is selling out nationwide and adding shows every weekend. He hit a career milestone with his highly anticipated first-ever stand-up comedy special “Woke-ish” which premiered on Netflix in February of 2018.
COMING SOON…
**JUNE 11 – POP UP ADDICTION RESOURCE FAIR at Linn Park.
**JUNE 11 – 12 – 23RD ST. ELIAS LEBANESE FOOD AND CULTURAL FESTIVAL, at St. Elias Maronite Catholic Church with Drive thru Takeout ONLY.
**JUNE 12 – SUN DRESSES, SHORTS AND SANDALS – THE DAY THANG, at Goudy Entertainment Center.
**JULY 7-17, 2022 – THE WORLD GAMES are coming. Look for more!
Well, that’s it. Tell you more ‘next’ time. People, Places and Things by Gwen DeRu is a weekly column. Send comments to my emails: gwenderu@yahoo.com  and thelewisgroup@