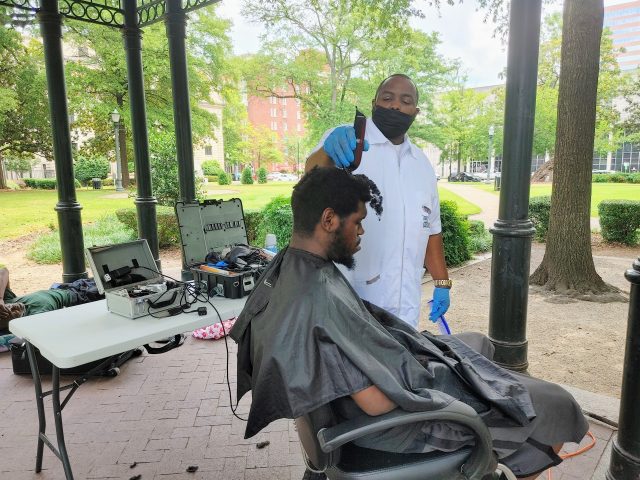 Quincy Moore, above, of Concierge Mobile Barbershop provided free haircuts on Saturday as the Birmingham Association of Black Journalists (BABJ), in partnership with Brother Let’s Talk and the Birmingham Barber Coalition, hosted “Choppin’ It Up” at Linn Park in downtown.

The BABJ sponsored the free barber services and mini-therapy sessions aimed to refresh the mind and body of homeless men in the Birmingham metro area as part of the National Association of Black Journalists (NABJ) “Black Male Media Project.”

Launched in 2017, the project’s main design is to enhance the portrayal of Black men in local media in a positive manner. The BABJ joined other chapters of the NABJ across the country to perform the outreach which is being highlighted on social media using the hashtag #inspireblackmen.

The BABJ was founded in 1983 by a group of media professionals who wanted to encourage the employment and retention of journalists of color, provide opportunities for professional development and offer scholarships and guidance to students considering careers in the media.