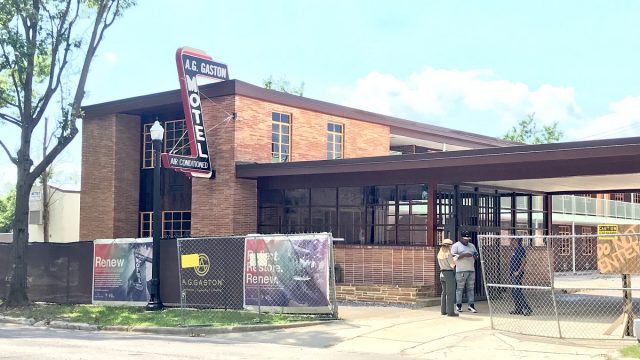 The National Park Service (NPS) wants to hear your vision and ideas as it moves forward on developing plans for the Birmingham Civil Rights National Monument.

July 10 is the final day to submit comments as Park Service officials delve deeper into developing a General Management Plan (GMP) for the monument, which encompasses some of the most important and iconic structures tied to the struggle for equal rights in Birmingham, and which led to landmark federal civil rights legislation in the 1960s. The monument was created in 2017 in one of the last acts by outgoing President Barack Obama.

One of the central structures within the monument footprint is the long-shuttered A.G. Gaston Motel, where civil rights leaders, including the Revs. Martin Luther King Jr., Fred Shuttlesworth and Ralph Abernathy, held strategic meetings around efforts to dismantle segregation in the city.

Built by Black businessman and millionaire A.G. Gaston, the motel was considered among the finest public lodgings and dining establishments for Blacks in the city. The structure is undergoing a dramatic restoration as part of the monument plans, but much of the details are still to be determined, with public input.

NPS officials recently held two virtual public meetings to gather input and feedback about the initial plans. They are urging more people to weigh in with ideas for the monument, the restoration of the Gaston Motel and issues such as parking, interpretive exhibits, location of a visitor center, transportation among sites, and staffing.

Among other downtown sites that are part of the Birmingham Civil Rights National Monument are the 16th Street Baptist Church, St. Paul United Methodist Church, Kelly Ingram Park, the Birmingham Civil Rights Institute and the shuttered “Colored Masonic Temple” on Fourth Avenue North, which is scheduled to be renovated. Also integral to the monument is Bethel Baptist Church in the Collegeville neighborhood, where Shuttlesworth was pastor.

The National Park Service will use the feedback to develop more specific plans that are expected to be ready for another round of public comments late this year or early next year. Park Service officials hope to have portions of the monument up and running before The World Games 2022 come to the city next summer.