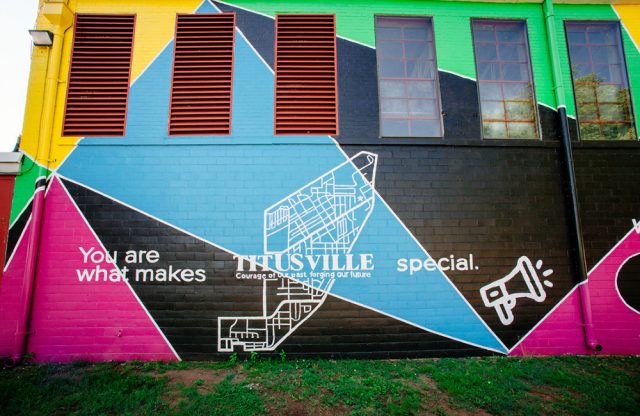 UAB News
Live HealthSmart Alabama, a University of Alabama at Birmingham initiative, is celebrating phase one improvements in Titusville with a ribbon-cutting ceremony Monday, Sept. 20.

Using a framework of positive changes in policies, systems and the built environment, Live HealthSmart Alabama is advancing healthy eating, physical activity, and prevention and wellness in underserved neighborhoods throughout Birmingham and the state.

When work began in Titusville, Live HealthSmart Alabama partnered with the Titusville Development Corporation (TDC) and neighborhood associations to listen to the communities’ needs. Then a customized implementation plan was developed to fit those needs using Titusville’s existing city framework plans. The latest advancements within the built environment of Titusville have been the culmination of a yearlong implementation project.

“In addition to keeping our communities informed about COVID-19, our teams have spent this past year making improvements to the built environment. For Titusville, there was a major focus on connecting the community through a safe and walkable Neighborway,” said Mona Fouad, M.D., CEO of Live HealthSmart Alabama and director of the UAB Minority Health and Health Disparities Research Center. “We’re excited to get to show everyone what has been accomplished.”

Titusville, one of the first neighborhoods where Black/African Americans could own commercial or residential property, has a long history filled with culture and community pride. In the 1960s, Titusville became the location of many key Civil Rights movements, including where  Martin Luther King Jr. penned his infamous letter From a Birmingham Jail, which was located in Titusville.

As industry developed in other parts of Birmingham and the country, Titusville saw a steep decline in residents and an increase in vacant houses. To reenergize the community and encourage walkability, Live HealthSmart Alabama — in partnership with Dunn Construction and Vulcan Materials — saw the potential to build Birmingham’s first Neighborway.

“Service To Our Communities”

The Neighborway — which runs along Kappa Avenue South and Second Avenue South from Memorial Park to the Villas at Titusville — connects a full mile of the Titusville community. This low-speed street can be safely shared by people who are biking, walking, driving, skating, jumping rope or engaging in other fun activities.

Along this path, residents will find a traffic circle, mileage signs, street markers and speed bumps, all of which come together to create a healthy, active neighborhood. These types of streets are important due to their ability to link community streets, calm traffic, and encourage pedestrian or bike safety.

“Service to our communities is a cornerstone of the Dunn Companies’ values, and we are proud to invest in Live HealthSmart Alabama and support UAB and the City of Birmingham in improving the lives of its citizens through healthier living in the built environment,” said Craig Fleming, president, Dunn Construction, and chair of the Advisory Board of the UAB Civil, Construction and Environmental Engineering Department.

In addition to the Neighborway, Live HealthSmart Alabama and its partners have added new sidewalks, made lighting improvements, installed a bus shelter, painted murals, added a micromobility station, created a bike lane and planted trees along First Street South.

“It has been a great and rewarding experience working with the City of Birmingham and Alabama corporations to accomplish the built environment improvements in Titusville,” said Fouad Fouad, Ph.D., director of the UAB Sustainable Smart Cities Research Center. “I believe these strong partnerships between academia and industry are built to last forever.”

“Currently, Alabama ranks among the worst in the nation in many health measures. The goal of Live HealthSmart Alabama is to move our state out of the bottom 10 in national health rankings,” Mona Fouad said. “To do this, community members have to have access to healthy food options and the tools to be successful. The Live HealthSmart Alabama Mobile Market provides that.”

The Mobile Market was created because of a consistent issue found in Birmingham’s underserved communities — limited access to fresh fruits and vegetables or food deserts.

According to the USDA, a food desert is a place where one-third of residents live more than one mile from the nearest grocery store. Using this definition and census tracks, the USDA estimates that roughly 19 million people (or 6.2 percent of the United States population) live in a food desert.