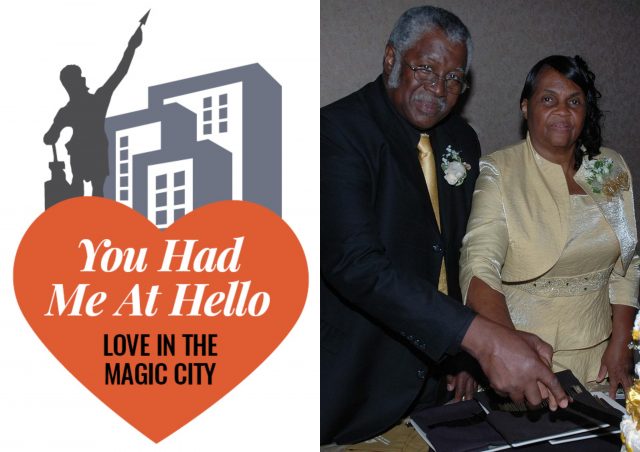 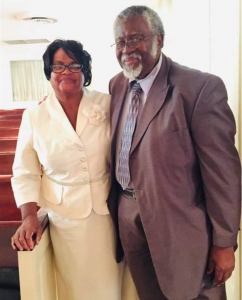 Met: Around 1957 in Avondale. Both Amelia and Nathaniel and their families had relocated from Woodlawn to Avondale to the same block. Amelia was 18, and Nathaniel was 19.

“I came riding through there on my bicycle when I first laid eyes on Amelia, and when I saw her, I said ‘good googly moogly!’. She was one of the most beautiful women I’d ever seen. I think it was love at first sight for me, but I don’t think she knew it,” Nathaniel said.

“When we first encountered each other, Nathaniel’s house was the happening house, we partied there — before we got saved — his house was the place young people would go to meet and have a good time,” Amelia recalled. “I fell head over heels in love with this man, he was tall, slim, and handsome. He fell in love with my lips and my shape, and I’m telling you, baby, he was hooked and he couldn’t get loose!” she laughed.

First date: In 1958, in Avondale at Amelia’s house. “Back in that time, we had to sofa sit,” Amelia said, “we dated at my house. My mama and daddy were in their room, and we were in the living room. We didn’t have a TV, so we were just enjoying one another, holding hands and kissing … but not too loud,” she laughed.

“I enjoyed being with her,” said Nathanial, “she had lovely parents. Everybody thought her daddy was mean, but he loved me. I could get anything I needed from him, he even used to let me use his truck, he was a good man.”

The turn: In 1958. “I was serious from the jump because I wasn’t thinking about nobody else but her,” Nathaniel said. “We loved each other.”

The proposal: In 1960 at Amelia’s house on her sofa.  “Back in our day, we didn’t do it like they do it now in modern-day. We just discussed it and went about our business. We didn’t think about [glitz and glamour], we just made a decision and went with it,” Nathaniel said.

“We were on one of our dates at my house, and back then jobs weren’t paying a lot, so we didn’t go nowhere, but while we were talking we just decided we were going to get married,” Amelia said. “He didn’t get down on one knee, he didn’t have no engagement ring, and I don’t even think he could afford one back then… We told our parents and they agreed, my parents cared for my husband a whole lot,” Amelia said.

The wedding: In 1961, in Avondale, officiated by Reverend James Moore of St. Mark Baptist Church in Avondale.  “We had a front porch wedding, right in front of my mother-in-law’s house,” Nathaniel said.

“I had a maid of honor, he had a best man, I had on a beautiful gown, and we did it with our parents and the pastor,” Amelia said.

“The church was down the street from Amelia’s house and across the street from mine, and they gave us a wedding shower since Amelia [and family] were members of that church,” Nathaniel recalled.

Most memorable for the bride was a celebration following their nuptials at Nathaniel’s aunt’s house. “Nathaniel’s aunt Claudia Mae Smith had made provisions for everyone to come over to her house in Titusville to have a celebration. At that time, Titusville was an exclusive neighborhood… We had a good time with the family and ate and enjoyed one another,” Amelia said.

Most memorable for the groom was the “enjoyable time at our celebration. My brothers and sisters were there, there was 10 of us, and we just had a good time,” he said.

Asked about their honeymoon, Nathaniel said — “do you know how poor we were back then?” he asked. “We had a honeymoon at home. It was a while before we got our own place, I moved in at my mother-in-law’s, and our first baby was born there,” he said.

Words of wisdom: “Our love is stronger today than it has ever been,” Amelia said. “I tell anyone that the main ingredient in a successful marriage is love. It’s about give and take because you are partners, both have to learn to be flexible and most of all communicate. Talk to one another and pray together. The main key is God because our faith in God has kept us for 60 years through all the ups and downs, and we’re still here because we’re dedicated to one another. My husband has had five surgeries and he’s on oxygen [daily], and I told him we gonna go [to the afterlife] together. I serve him three meals a day, on a tray with a napkin and a drink. I take good care of him like he takes care of me. I’ve never had to pay a house note, a gas bill, a light bill or nothing. We have been blessed by God through his [employer, the Dwight and Lucille Beeson Estate, where he did domestic work] of 30 years. He [God] had a ram in the bush and that was Lucille Beeson. She told us to go find a home and did not put a price on it. She told us to pick out whatever house we wanted, and she bought our home with no strings attached. The rest of our story and the blessing [the Beeson’s] were to us would blow your mind,” said Amelia.

“She said it all. I agree with all of it,” Nathaniel said.

Happily ever after: The Perrys have seven children: Natalie, Sandra, Nathaniel Jr., Anita, Kenny, Timothy, and Terry, 24 grandchildren, and 14 great-grandchildren.

Amelia, 79, is a Woodlawn native, and Ullman High School [southside, Birmingham] grad. Amelia feels blessed to have been able to be a stay-at-home mom to raise their children, and serve on several committees at their church, Greater Emmanuel Temple Holiness Church [East Lake] for 58 years.

Nathaniel, 81, is a Woodlawn native, and A.H. Parker grad. He worked for Dwight and Lucille Beeson’s family estate for 30 years, and as a molder at Stockham Valves and Fitting in Birmingham for 28 years.

The couple has been members of Greater Emmanuel Temple Holiness Church [East Lake] for 58 years. Mr. Perry served as Sunday School superintendent for 42, the Brotherhood Committee for 58, is the oldest trustee on the church board, and has held many positions of service in the church. Mrs. Perry has served as a Sunday school teacher for 58 years, Sunday School superintendent for five, Vice President of the Mother’s Board for the past 25 and many more positions of service in the church