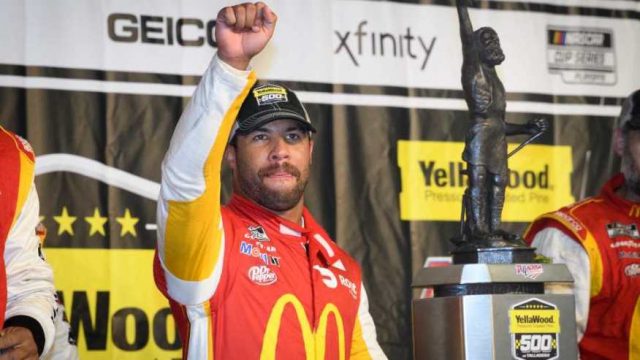 Wallace is the first Black driver to win a race in NASCAR’s premier series since Hall of Famer Wendell Scott took the checkered flag at Speedway Park in Jacksonville, Fla., on Dec. 1, 1963.

The 27-year-old Mobile, Alabama native was also one of three drivers outside the respective Series Playoffs to win all three Talladega races in NASCAR’s top three divisions this week. All were first-time winners, a historic first.

Monday was the first victory for 23XI Racing, a team that debuted this year with driver Denny Hamlin and Basketball Hall of Famer Michael Jordan as co-owners.

Wallace held the lead in Monday’s rain-delayed YellaWood 500 at Talladega Superspeedway when Ryan Preece turned into the outside wall off the bumper of Chris Buescher’s Ford to cause the fifth caution of the event.

As the cars circled under the yellow, rain drenched the 2.66-mile race track. NASCAR brought the cars to pit road on Lap 118 of a scheduled 188.  After another shower thwarted track-drying attempts, NASCAR called the race and declared Wallace the winner.

Wallace’s victory came at the same track where the sport came together to support him after the death of George Floyd in Minneapolis and after a noose — later found not to be directed at Wallace — was discovered in his garage stall.

“Man, I’m just so proud of everyone at 23XI,” Wallace said. “New team coming in and getting a win late in the season. I know a lot of history was made today, I believe, which is really cool, but it’s about our guys, about our team, about what was done.

“I appreciate Michael Jordan, I appreciate Denny for believing in me and giving me the opportunity. … It’s pretty fitting that it comes here at Talladega.”

Wallace was choked up when asked about the historic significance of his achievement.

“I never think about those things, and when you say it like that, it obviously brings a lot of emotions, a lot of joy to my family, fans, friends. … You’ve got to stay true to your path and not let the nonsense get to you and stay strong, stay humble, stay hungry.

“There’ve been plenty of times when I wanted to give up. You surround yourself with the right people, and moments like this that you appreciate.”