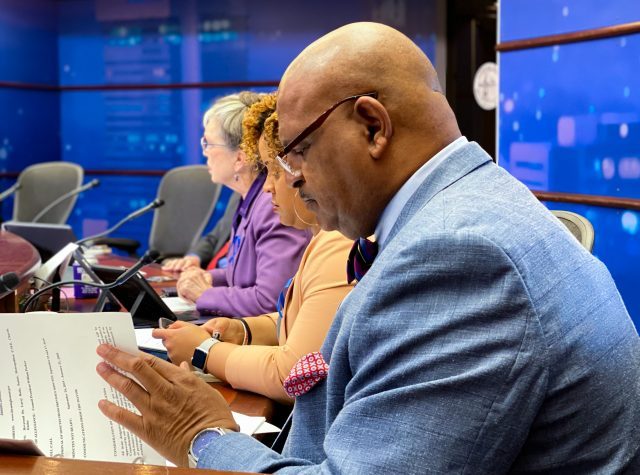 Departing Birmingham City Councilor Steven Hoyt grew up in Gadsden, AL public housing raised by a mother who cared for everyone in their neighborhood and gave her son a “zeal to serve,” he said.

“My mother has always been somebody that was concerned about the neighborhood, concerned about other children, so growing up, we had a revolving door,” said Hoyt as he prepares to depart the council today (Oct. 19) after serving four terms. “People were in and out, and I can even recall coming home from [Miles College] and somebody else had my room. She done took somebody else in, but that’s what I know about service.”

Hoyt has represented the city’s district 8 since 2005 and did not seek re-election in August.

Hoyt, 59, a former vice president of the Five Points West community and later president of the Belview Heights Neighborhood Association, said he ran for council also because he had a unique perspective for the city.

Hoyt’s zeal to serve has led him to a variety of projects with his council colleagues and four mayoral administrations – Bernard Kincaid, Larry Langford, William Bell and Randall Woodfin. [His term started during Kincaid’s mayorship, and Smitherman and Royal served as interim mayor during his time on the council]. Hoyt said he leaves the council with Birmingham doing better than when he was elected, having been involved in projects like the Birmingham CrossPlex in his own district, as well as Railroad Park, Regions Field, Protective Stadium and the upcoming World Games 2022.

“When you see cranes up and they’re moving dirt, and things are going up. I think, where we are today is much further than where we were then, 16 years ago…[There’s] just any number of things that I can point at that we’ve had some hand in,” Hoyt said.

The decision to leave the council came down from Hoyt’s wife Daphne, he said.

“She said, ‘Listen, this [past council term] is the last term. She said, ‘so you need to get it out of your system, whatever you got to do.’ She said, ‘Because the next 16 years belong to [me],’ and listen, I am a non-conformist conformist,” Hoyt said. “In other words, I had a chance to get it out of my system, and now I’m conforming to what she told me to do.”

Though it was his wife that got him off the council, Hoyt said she has given him the “balance” he needed.

“She’s not politically attached to any stuff. She tells me like it is,” Hoyt said. “Sometimes, I come home and say, ‘Well so-and-so, so-and-so.’ She says, ‘Steven, I think you’re reading too much into that,’ and just let’s all the air out of my balloon.”

While he’s leaving formal politics, Hoyt said he’ll continue his pastoral duties at Noble Chapel Christian Methodist Episcopal, in addition to his work with the Dannon Project, which helps rehabilitate ex-convicts, and he plans to continue his Education with a Purpose scholarship program, which he said will have given away about $139,000 in the last eight years to Birmingham City Schools graduates.

“We can say that we have impacted these lives of these young people,” Hoyt said, “and I’m very happy about that. Some of our young people are going off to law school, some of them have even written two books, and there’s all kinds of stuff that came through us.”

Since announcing his departure from the council, two other councilors have offered to take up other of Hoyt’s initiatives, with Clinton Woods taking the Man Up breakfast to celebrate men of character and President Pro Tempore Wardine Alexander taking the FILES Arts Project, which promotes to and educates Birmingham youth about careers in dance and other arts.

“What an honor that your colleagues think enough of your initiative to say, ‘Hey, I like what you’re doing. I want to keep this going,’” Hoyt said.

Hoyt said he wishes “much success” to the council, including to Carol Clarke who will fill Hoyt’s vacant seat.

“I just look at the wealth of experience she brings to the table. She certainly has all the tools and all the wherewithal, as well as the intuition to be a successful councilor,” Hoyt said.

He added, “There’s a real joy in being able to serve your city and serve one of the most historical cities in the United States of America, because we are the pinnacle of Civil Rights and so to serve that city in that capacity for 16 years, is no small feat, but it’s also humbling to have had the opportunity to serve.”