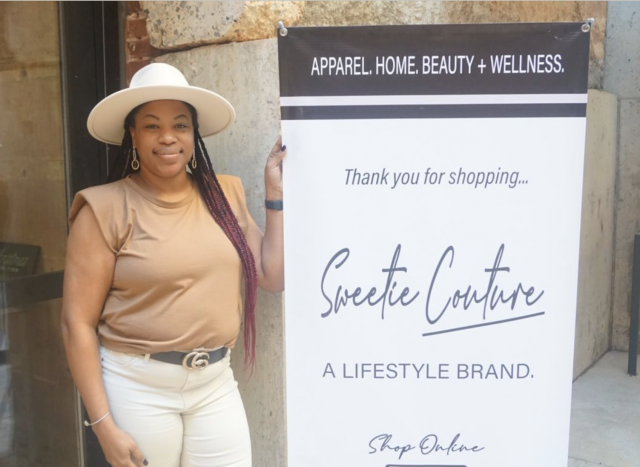 “The majority of my life has been dedicated to beauty and giving the space and opportunity for women to embrace their full femininity,” she said.

Growing up, Humphrey watched her mother, Mary, operate a beauty salon. Little did she know that her mother was forging a path toward the opening of Sweetie Couture, a lifestyle clothing brand at Mercantile on Morris, a mixed-use business and residential development on Birmingham’s Morris Avenue.

“Sweetie Couture was curated for modern women who love to incorporate unconventional elements into every facet of their lives—the way they dress, the way they style their homes, even down to their beauty and wellness routines,” said the boutique’s owner and operator. “I believe customers can create their own ideal versions of themselves.”

“Home life was absolutely wonderful,” she said. “It’s a very nostalgic place where everybody knows everybody. Most of the people in the community are family. Even my church [Shady Grove Missionary Baptist Church] is in Mulga, right around the corner from my home. [The city] just screams family.”

Humphrey is youngest of three sisters (Anquintta and Carmanita are her older siblings), and residents in the small town came to know the trio as “The Humphrey Girls.”

“That name kind of stuck with us,” she said. “We were always together, so people naturally just gave us that name.”

Humphrey loved to play dress up when she was younger.

“I would get in trouble sometimes because I would change clothes so many times during the day,” she said. “My mom would be like, ‘Wait a second. … How many times are you going to change?’

“I always told [my mother] I was interested in learning to sew, and she was someone who always pushed my [sisters and I] to do what we were interested in. … She would do all she could to ensure that we had some formal training that would put us on a path for what we ultimately wanted to do.”

In the mid-1980s, Humphrey’s mother opened the Hair Dashery beauty salon, where Humphrey would help out while attending Minor High School.

“I feel like my mother was one of the first African American salon owners in Homewood. I don’t really know if that’s true, but that’s what it felt like,” said Humphrey. “I grew up in the salon. [It was] a good atmosphere that centered around beauty. There are people I met when I was growing up who still remember me. … To this day, my mom still services clients she had when she first opened.”

An Eye for Design

After graduating from high school in 2000, Humphrey enrolled at the University of Alabama (UA), where she studied fashion retail.

“I’ve always known what I wanted to do,” she said. “I started in apparel design and then changed my major to fashion retail the following semester. [My time at UA] was absolutely wonderful. I learned about so many facets of the fashion industry and the history of fashion. … I learned that you can incorporate so many different styles into one to create something really unique. I’ve always loved every part of it.”

In 2004, her senior year, Humphrey interned at Banana Republic in Atlanta, Georgia.

“I worked alongside the visual design staff,” she said. “Moving to a new city, a larger city outside of Mulga, was definitely an experience. … Moving on my own as a senior in college, no mom, no dad, staying true to what I was taught morals-wise and work ethic-wise enabled me to have a very successful internship. … I really felt like I transformed into an actual adult at that point in time.”

After graduating, Humphrey moved to Birmingham in 2005.

“You know how when you get out of college you think, ‘Oh gosh! I have this degree. I’m going to really do exactly what I want to do.’ … Sometimes that’s really not the case,” she said. “At that point, I was working a series of jobs in the hotel and hospitality industry and [felt that] I had to do something in my field. I’m a workaholic and I like to do a variety of things, … so being tied to a 9-to-5 job was just not my thing.”

In 2007, Humphrey opened her own lash business: Lash N Dash. “It is kind of a spinoff of the Hair Dashery,” she said of the Homewood-based shop. “I actually started out servicing clients in my mom’s salon, while I was doing an apprenticeship for cosmetology, so it kind of evolved into its own thing.”

The following year, Humphrey decided to go back to school. She enrolled at Strayer University, where she pursued a Master of Business Administration degree.

“After taking that leap of faith with starting my own lash business, I started to envision what I really wanted to do, which was start my own clothing line. So, I decided that going to school for business would plant a seed that could grow into that vision,” she said.

“It started out as me just creating a clothing line,” she said. “I felt like I would fit more into a creative director role, so I started doing some designing and figuring out what I wanted the collection to look like.”

At the time, the mother of two was pregnant with her first child, Zakiyah.

Humphrey spent a “few years dabbling” as a freelance showroom designer, a field coordinator for a merchandising company, and a graphic designer.

“My sister works as a graphic designer, and that’s kind of where I learned everything there is to know about graphic design,” she said. “Eventually, I learned how to use [graphic design software] from a creative standpoint and figured that I could create my own visual aspect of anything, whether it’s a store design or designing a T-shirt. … That was one of the things that helped me push myself in that arena.

“I started doing research on my own and thought, ‘What do I need to do?’ I started mapping out a plan of how to incorporate all this stuff into the perfect career for me.”

In November, Humphrey opened her boutique at Mercantile on Morris. “When you think about Sweetie Couture, it’s about moments,” she said. “We love to create moments, whether it’s what we wore that day and how that trickles over into how you decorate your home and even down to health, beauty, and wellness. … I really want to make women look pretty every day.”