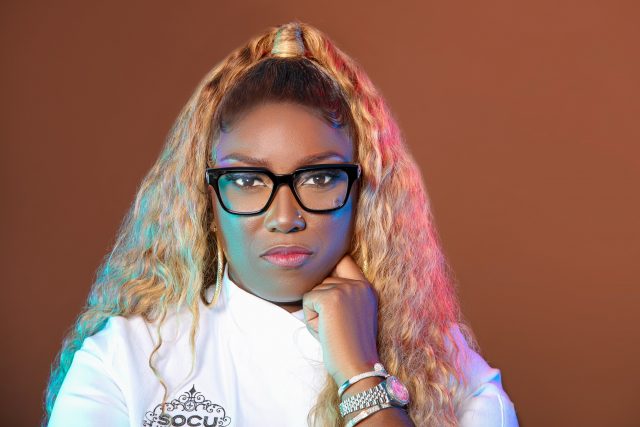 Meeting those challenges led her to open SOCU Southern Kitchen and Bar, a successful upscale coastal Southern restaurant in her hometown of Mobile, Alabama. And she plans to open a second location in downtown Birmingham next month.

Barrett decided to bring SOCU—which stands for Southern Culture—to the Magic City because she has several friends in the area and she found the city appealing.

“Bayer Properties, [which owns the Pizitz building], reached out to me and showed me a great space, and I fell in love with Birmingham,” she said. “I have a lot of friends that I went to high school and grew up with who have permanent homes [in the city], so I felt that it was a great second home for the brand.”

SOCU’s menu includes a broad range of dishes, including braised oxtail, fried chicken, lobster deviled eggs, and so much more. Many of Barrett’s culinary creations are dressed up versions of the foods she grew up with, and they serve as reflections of herself.

“I really just want to pay homage to who I am,” she said. “I feel like in life we’re always striving to be the best version of ourselves, which means we have to be true to who we are. … For me, I love to not only eat food from [my hometown] but also elevate it, pay homage to it, and respect it.”

On Tuesday, January 25, Barrett will appear on Food Network’s “Raid the Fridge.” Hosted by food writer and restaurateur Dan Ahdoot, chefs on the fast-paced competition must prepare dishes with ingredients from mystery refrigerators. The challenge: competitors must choose the fridges based only on the photos, magnets, recipes and art on the appliance doors.

From Land and Sea

Barrett, a Mobile native, opened SOCU Southern Kitchen and Bar in 2019 to “literally serve the food that the land and sea provide us.”

“[Mobile is] right there by the water, so you can go out with a fishing rod and catch some beautiful snapper or speckled white trout,” she said. “And if you go to the countryside of Alabama, towns like Loxley and Foley, there are cornfields, there are people growing collards and sweet potatoes.”

SOCU is on Dauphin Street in Mobile. Barrett was given the opportunity to use the space by friend and fellow Mobile restaurateur Chakli Diggs, who let her set up a pop-up at the location.

“About 400 people showed up, and [Diggs] was like, ‘Erica, how did you get all these people out here?’ I said, ‘Social media.’ He was like, ‘Well, this restaurant’s been closed down for a couple of years. Would you be interested in me introducing you to the owners and you taking over my lease?’”

Barrett believes the South has the most “distinctive” food in America, which is a personal point of pride.

Still, Barrett believes there are some misconceptions about Southern food.

“Sometimes I do feel like Southern food has a stigma—that it’s unhealthy, that it’s not light, that it’s very heavy, that it doesn’t look sophisticated. … People love the flavors, though, so I wanted to take all of those things and really elevate it.”

When Barrett first went off to Georgia to attend Clark Atlanta University in 2000, she didn’t think she could make a living as a chef, despite having a passion for food.

“A lot of people are super-successful from owning restaurants, and a lot of chefs are paid very well. As I learned that later on in life, I said, ‘I need to take this seriously and go after doing what I love,’” she said.

Before opening SOCU, Barrett held a variety of human resources positions in “corporate America,” she said. It wasn’t until 2010, when Barrett entered the Food Network-supported Lea & Perrins Shine at Dinnertime Challenge, that she started making moves in the food industry. For the contest, Barrett made “crunchy Asian pork tacos,” using marinated pork tenderloin and Asian slaw that featured a base of Lea & Perrins Worcestershire sauce.

In 2012, Barrett started her own “breakfast lifestyle brand,” Southern Culture Artisan Foods (SCAF), she told AL.com. She originally wanted to create higher quality pancake and waffle mixes than those that were readily available at grocery stores. She now sells products like bacon rub, grits, and coffee through the brand.

Barrett pitched her product to investors on the TV show “Shark Tank” in 2014 and later made an appearance on the business improvement series “The Profit” in 2018. Media mogul Oprah Winfrey even included SCAF grits on her 2016 Oprah’s Favorite Things list. While promoting her product line, Barrett also finished culinary school in 2017 with a degree in culinary entrepreneurship.

Running a business and living in Atlanta, where Barrett still lives, involved a lot of juggling.

“I was running a business full time, so it was a challenge getting to New York on a regular basis [to promote my products], but I fell in love with New York, and I learned a lot. I think it was worth every penny I paid. I don’t regret it,” she said. “I met a lot of great chefs and entrepreneurs that own restaurants in New York City, [as well as some in Dallas, Texas], and other places around the world.”

In addition to running both SOCU and SCAF and opening her latest restaurant in Birmingham, Barrett is opening a steakhouse in Atlanta and a coffee shop in Mobile. She also plans to open some sort of business in New York in the future.

Barrett gets her taste for entrepreneurship from her mother, Lamarinette, who owned hair salons in Mobile when Barrett was growing up. Even when Barrett was working her “corporate” jobs, she wanted to “run my own business like my mom,” she said.

“When you’re a child, you’re a sponge, so you absorb everything, and those things don’t kick in until later on in life. I decided, ‘Man, I definitely want to be an entrepreneur.’”

Barrett grew up with her sister, Jessica, who owns a financial services business in Mobile, and her stepfather, who is a roofer.

Having grown up in Mobile, Barrett said many are surprised by what the city has to offer.

“[My friends always ask], ‘Is this what Alabama looks like?’ I’m just like, ‘It’s beautiful, isn’t it?’ They always imagine [the state as] countryside with no view, but people fall in love with it. … It’s one of those things where it’s working,” Barrett said. “I’m getting more people to discover Mobile and discover the food we have. The ultimate goal is to spread the food that I grew up eating around the world.”

And that includes Birmingham, which is a great second home for the SOCU brand because “[people will] appreciate the type of food that we’re cooking,” Barrett said.