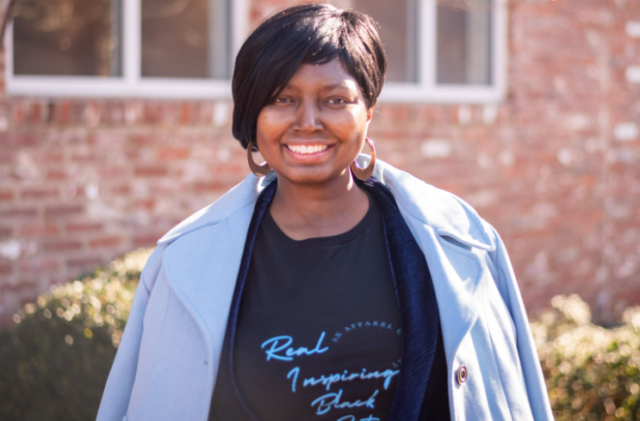 Birmingham entrepreneur LaKisha Cargill’s creativity always shines, whether it’s through her writing or through the name of her forthcoming apparel company, Real Inspiring Black Sista (RIBS).

The name of her business which she plans to launch in February 2022, comes from the Bible, Genesis chapter 2, which tells the story of how God formed the first man, Adam, out of the dust of the ground, and then created Eve, the first woman, from one of Adam’s ribs.

As a breast cancer survivor who was moved by inspirational sayings during her recovery, Cargill wants to uplift women through motivational T-shirts and other comfort wear.

“Motivational quotes really got me through that time,” she said. “[Plus], the T-shirt and comfort wear business is popular now, and it is expected to become even more popular in the future.”

Cargill recently won $5,000 through a national pitch competition for women starting or leveling up their businesses: Women’s Empowerment 360, or WE360. This national YWCA program is designed to put women and women of color entrepreneurs who are fearless leaders and innovative shakers on the path to starting a successful business.

Cargill plans to use her prize money to hire a graphic designer and a brand and content strategist for social media. Her goal is to officially launch RIBS next month.

“[The WE360] competition involved 14 women across the United States, all with varying businesses,” she said. “It was a great opportunity to get together and network with these incredible women and also to hear what they’re going through to start their businesses. … I know social media is a great marketing tool for businesses, and I can’t wait to get things up and running.”

Cargill, 44, grew up in Birmingham’s Pratt City neighborhood and attended Ramsay High School. As a teenager she found a passion for writing.

“I think where I knew I wanted to write more was in high school,” she said. “The funny thing is, I still have just about every paper I’ve ever written for any grade.”

She added, “I’ve always been the person that likes to be creative and do little things. Around Easter time, my grandmother and I would make little bunny rabbits and baskets. And when I was in high school, I started a business where I was making custom baskets for people to celebrate their birthdays.”

After graduating from Ramsay in 1996, Cargill attended Birmingham Southern College (BSC), where she studied English.

“I took a class on the novels of Toni Morrison, and [she] came to speak at the school around the same time. That was amazing.” Cargill said she also learned to “think outside of the box” during that time. “I also studied and read about vampires and vampire literature. There was a class I took on that, as well . . . and that was honestly my favorite part about school.”

Cargill added, “I also love talking about diversity and inclusion and social justice issues. I’ve written papers about the culture of Native Americans and how they have been viewed. I also have written papers about African Americans in Birmingham. … I had my first opportunity in one of my senior writing classes to get published in the Birmingham Family Times, which was my first time getting paid for writing.”

“I did a lot of service learning, too. At [BSC], we did alternative spring break. During that time, we would go to places like South Carolina and learn about the Gullah culture, immersing ourselves in the culture and building or repairing homes. Through service learning, I also went to Washington, D.C., as well as to San Francisco, California, where I helped serve [people dealing with homelessness] at Glad Memorial, the church featured in the ‘Pursuit of Happyness,’ starring [actor] Will Smith. … [The movie] is actually based on a true story about when [the character portrayed by Smith] takes his son to live [at the church], and they stay in the bathroom one night. It was quite an eye-opening experience.”

Cargill graduated from BSC in 2000 and accepted a position with an insurance company, where she currently works as a team manager.

Along with her day job, Cargill continues to write about a broad range of topics. One of her passions is children’s books, which she has written but not published.
“I love to write, and I’m big on the idea of children needing to see themselves in the things they read and see, … so they get the message that they matter to the world,” she said. “My books basically talk about [young people] being unique and special. … What inspired me really was the birth of my cousin. He’s a teenager now, but I really started writing down some of the stories when he was born.”

Another passion is diversity and inclusion, Cargill said: “I serve on a board at my company, [Chartered Property Casualty Underwriter], and that’s kind of the role I’ve taken on. … That’s the reason I want to write children’s books, so that can be instilled in them at a young age.”

Cargill, who was diagnosed with breast cancer at age 26, also has always loved writing and creating poems. Her poetry went “up a notch” during the summer of 2020, after the death George Floyd, a Black man who was murdered by a white police officer in Minneapolis, Minnesota.

“I watched the horrible murder of George Floyd on television,” she recalled. “Stunned, saddened, and shocked, I picked up a pen and started to write. … I wrote two poems to capture the hurt and pain I felt and to memorialize the shift I saw occurring in our society.”

Floyd died after being handcuffed and pinned to the ground by the officer’s knee in an episode that was captured on video, touching off nationwide protests. That was only the beginning for Cargill as a poet.

“Fast forward to this year, when I signed up for the [University of Alabama at Birmingham (UAB)] Spark Poetry Writing Intensive—I was hooked,” she said. “I’d never had formal training in poetry, but the instructor, Tina Mozelle Braziel, made it so accessible that I didn’t want to stop. I am lucky that she agreed to continue the poetry intensive with [people in her intensive class]. Each week, she continues to help us craft, critique, and revise our work.”

In the summer of 2021, Cargill was awarded first place by the Southern Christian Writers Conference for her poem “Betrayal,” which highlighted her survivorship after being diagnosed with breast cancer in her 20s.

“It was written in less than an hour as I sat and reflected on my survivorship journey,” she said. “It was originally published in Wildfire magazine, a publication that gives a voice to and builds community for young breast cancer survivors. I was ecstatic that it found a home and even more ecstatic that it won an award.”

Cargill was diagnosed with stage 2 breast cancer, and “it’s been a whirlwind since then,” she said. “I went to UAB Hospital, which I think is one of the best hospitals around, and they took real good care of me. My whole thought process was to turn something negative into a positive.”

In 2008, a year after she was diagnosed, Cargill joined the advisory board of the O’Neal Comprehensive Cancer Center at UAB, where she served for five years.

“During my time on the board, my primary goal was to raise money for young investigators looking to find a cure for cancer through different events,” she said. “During my final year on the board, I served as co-chair for the public relations committee and worked on different campaigns. … It was an opportunity to really spread the word about who were and what we were raising money for.”

LaKisha Cargill is launching Real Inspiring Black Sista (RIBS) apparel company in February 2022, in honor of Black History Month. She is currently working on a children’s book and blogs at sizablechic.com.