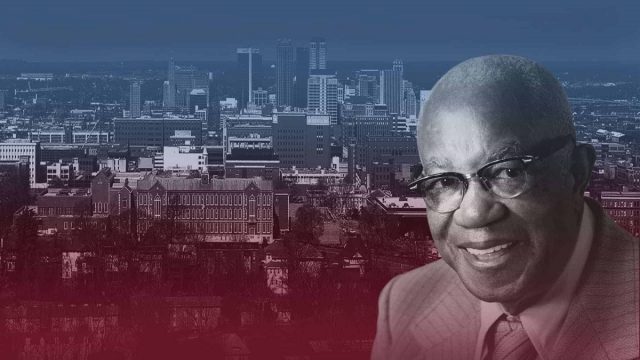 Living under Jim Crow in Birmingham, a Black person had to navigate a world of restrictions. They couldn’t swim in a public pool. They could not place their Black hand on the “white” Bible in a courtroom. They couldn’t be buried in certain cemeteries.

It was the ultimate rejection, according to Dr. Martin Luther King Jr.; like, “forever fighting a degenerating sense of nobodyness.”

But Birmingham business titan A.G. Gaston was not content to fall into despair. In spite of Birmingham’s dogged system of segregation, he created an empire of businesses in service to African Americans. Gaston believed that even if you were a person of color, “a part of all you earn is yours to keep.”

Born the grandson of former slaves, Arthur George Gaston owned scores of businesses and provided hundreds of jobs for Blacks. He touted that his companies were “strictly 100 percent Negro” and provided services in everything from banking to burials.

Gaston created his empire by “filling a need” for African Americans.

Within the walls of his companies, he was not bound by restrictions and permissions set by oppressive laws. In his economy, he found his freedom. Then, he shared it with others who looked like him.

Led by business magnates Bob Dickerson and Gaynelle Adams-Jackson, this gathering is where business leaders learn and develop best practices, as well as inspire the next generation.

Dickerson cut his teeth in business under the tutelage of Gaston and has vowed to continue to honor the man and his legacy. This conference is one of those ways. He and Adams-Jackson have said that they want to create a platform where accomplished leaders, orators and business owners can share their experience and create an environment of celebration, challenge, and empowerment.

The 18th Annual A.G. Gaston Conference will be held on February 22-23. This year’s theme is “Navigating the Journey from Civil Rights to Economic Justice” and will take place at the Medical Forum downtown. Featured speakers will include Dr. Andre M. Perry, a senior fellow at The Brookings Institution; Autumn Kyles, CEO of Detroit Dough; and Cheryl McKissack Daniel, President & CEO of McKissack & McKissack. The event includes panel discussions and special programs open to entrepreneurs, business owners, corporate leaders, and community advocates.

In the 1950s, the lack of hotel accommodations for Blacks visiting the city gave birth to a network among the residents. Locals would open their homes and offer a seat at their dinner table when celebrities, politicians or activists would come into town. As a businessman with a keen sense for growing needs, Gaston saw this as an opportunity.

In 1951, while on a trip in Europe, Gaston learned that a Baptist convention was planning to host one of their National Sunday School and Baptist Training Union Congress in Birmingham. Having men and women of the cloth come to the city would be good, but there would be no place for the bishops, pastors, and teachers to rest.

“It disturbed me that facilities for Negroes were so limited,” Gaston said. “White hotels did not accept all races, and, with one or two exceptions, Negro-operated hotels were little more than shelters for transients.”

Gaston invested $300,000 to build a first-class motel. It opened on June 30, 1954, touting 32 air-conditioned units with individual phones in each room. There were custom draperies and luxurious bed coverings.

“Many persons passing through our city now will have a fine place to stay,” Gaston was quoted as saying. “I have long regretted there was no top-flight motel or resting place for Negro visitors in our city, and I was determined to make our new motel one that would attract Negro tourists.”