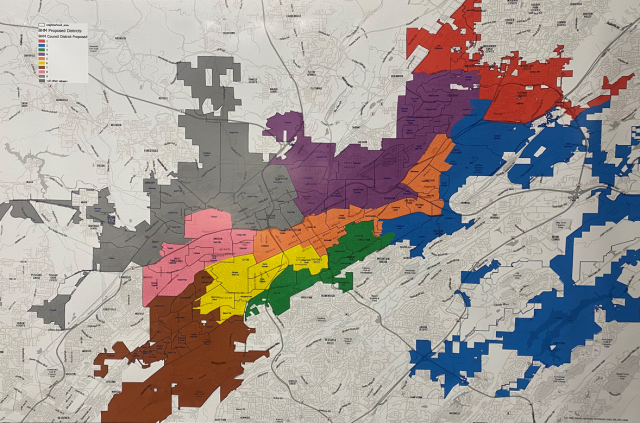 As Birmingham continues its City Council redistricting process, one councilor representing a significant chunk of the city’s south side said this week that she is hurt at the loss of a portion of her district.

Councilor Valerie Abbott, who has represented District 3 since 2001, said she is losing “the heart” of her district to District 6, represented by Pro Tem Crystal Smitherman.

“[My district] looks like it has a large shark bite taken out of it, where Five Points South is, and that was a big concern to me because I have an affinity for the heart of my district, and the heart has been ripped out,” Abbott said.

During the redistricting process, which is undertaken every decade following the release of new Census data, lines marking Birmingham’s nine City Council districts have to be moved to ensure that each district has about the same number of people.

Abbott said she asked Smitherman for the portion of the Five Points South neighborhood, which is currently split among Districts 3, 5 and 6, back but that Smitherman declined.

“I wish she’d change her mind because I’m just heartbroken over it…I don’t covet anybody else’s district. I would just like to keep what I have,” Abbott said.

Smitherman said she lost population by giving up portions of several neighborhoods including Smithfield (to District 5); Powderly (to District 7) and Graymont (to District 8) to make them whole. However, she gained additional population from West End Manor.

Because the other districts on the west side of Birmingham needed additional population, Smitherman said she “could only go south.”

Smitherman said in the “spirit of complete neighborhoods…Five Points South is huge, so we couldn’t make it a whole neighborhood” in just one district.

Also, putting Glen Iris, which is split between Smitherman and Abbott, solely into Abbott’s district will make it more diverse, Smitherman said.

Redistricting expert Kareem Crayton said the councilors can still decide to change the maps but that he and Doug Turner, whom Crayton is conducting the redrawing process with, think the current map is good.

“I recognize, as I’ve said to those of you all whose districts were changed significantly, change is not easy, and I respect it, and you all ultimately have a choice as to whether this recommendation is the way you want to go. It’s our best opinion at present, that that sort of the configuration makes the most sense,” Crayton said.