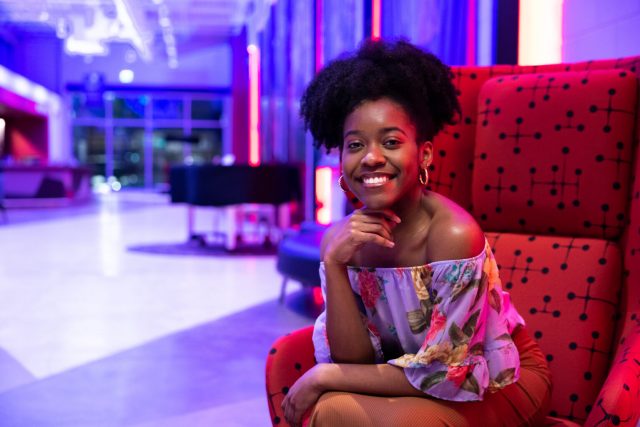 With Valentine’s Day coming up, there’s no better way to celebrate than with a story of romance and song. Red Mountain Theatre presents Once on This Island, a Tony Award-winning musical about star-crossed lovers and a peasant girl chosen by the gods. Keep reading to learn more about the show and how to get your tickets today.

On an island in the Caribbean Sea, four gods rule: Asaka–Mother of the Earth, Agwé–god of Water, Erzulie–goddess of Love and Papa Ge–demon of Death. On half of the island lives the peasants and the other half the rich upper class.

Ti Moune, a peasant girl, is saved by the gods from drowning as a child, and as she grows up she prays, asking for her purpose. The gods gift her the opportunity for love in a classic story of forbidden romance with the charming and wealthy Daniel, whom she saves and nurses back to health.

This is a story of conflict, classism, romance and sacrifice.

Jalyn Crosby plays Ti Moune, an optimistic, kind and fearless young woman who shares her joy for life with everyone she meets. It is her love for Daniel that redefines the entire socioeconomic dynamic of the island.

Crosby says she relates to Ti Moune’s positive spirit, and she loves how the character always looks for the best in people. This story focuses on the relationship between two characters, but the challenges Ti Moune tackles prove that real love is more than just romance, it can change the world.

“The love and truth in the story of Ti Moune and how the aspects of culture and Blackness oozes throughout makes this show so special,” said Crosby.

“Simply put, it’s a timeless story of unforgettable music for the whole family and an incredible cast of colorful characters you’re bound to fall in love with,” Bell said. “Also, I find it rare that we get to see stories like this—about Black people living, thriving, loving on stage. We are in a very special moment in American theatre right now where the diversity of Black culture on stage is becoming more and more common across theatre in the entire country.”

If you love epic romance, incredible music, dance, mythology or strong female characters, this is the show for you. Once on This Island is no run-of-the-mill cheesy romance, and as the story unwinds, you’ll see that although love can conquer, life doesn’t always have a storybook ending.

The sacrifices made will pull at your heartstrings, the romance will warm your heart and the economic and social inequality will challenge you to think deeply about our own state of society.

Just as inspiring as the storyline is the music, with beautiful ballads and dynamic group numbers that pull audience members into the Caribbean island world. The woodwind, maracas and drumming create a tropical, upbeat sound that sets the scene for this island so full of life and culture.

A huge theme throughout the show is about breaking through social barriers and fighting back against racism and classism. Although the story of Ti Moune is fiction, it reflects actual historical social separations and culture in the Caribbean. Due to the unique development of the area in the 18th century by French and English colonists, a clear divide in power and status was established, and the politcal, social and economical after-effects from this colonization remain in Haiti to this day.

Ti Moune and the other peasants who are described as “Black as night”, live on the poor side of the island, and the lighter-skinned upper-class descended from the French, live on the rich side.

Ti Moune’s skin color and background make it impossible for her to marry her love, but her bravery and sacrifice paves the way for a new world allowing people of all social statuses to become one.

“Once on This Island” sends a powerful message and one that hits even closer to home during Black History Month. It’s not about the color of your skin or where you come from, it’s what’s on the inside that matters most.

For more on the modern, guide to Birmingham visit bhamnow.com