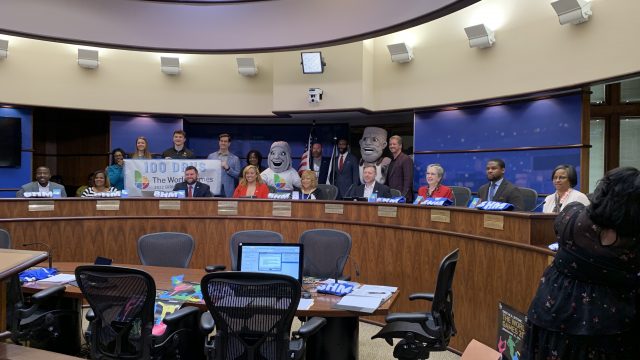 The announcement was made during the Birmingham City Council’s weekly meeting.

“Our city, that was once infamous for racial disharmony, will now be a great beacon for people of all cultures, breeds and countries around the entire world,” said Birmingham Mayor Randall L. Woodfin, who read a proclamation to mark the remaining 100 days and urged residents to get excited about the Games.

“I encourage all residents to salute this moment and to join the city and the game organizers by signing up to volunteer and also making plans to cheer on these champions so that the world can see what makes this very special place,” Woodfin said.

An expected 3,600 elite athletes from more than 100 countries will compete for gold, silver and bronze medals from July 7-17 at The World Games 2022, which is organized with the support of the Olympics and takes place every four years. This year marks the 11th edition of The World Games and the first that will be held on U.S. soil in over 40 years.

The relay is a journey where thousands of America’s military veterans will each have their turn carrying the same American flag from the U.S. Capitol in Washington, D.C. to the Opening Ceremony of The Games at Protective Stadium in Birmingham.

“It’s going to be an incredible moment of national unity to watch veterans bring the American flag into the Opening Ceremony in front of a live, global audience as our country plays host to thousands of athletes and fans from every corner of the world,” said Nick Sellers, CEO of The World Games 2022.

Team Red, White & Blue (Team RWB) works to support veterans by helping them find lasting fulfillment through the creation of deep bonds with other veterans and civilian supporters.

“Each time the American flag is passed from one runner or cyclist to the next during its epic journey from Washington, DC to Birmingham, Alabama, it builds a valuable connection and unforgettable pride,” said Team RWB’s Founder and Executive Director Mike Erwin.

Former U.S. Army Sergeant Noah Galloway, a Birmingham native who serves as an Honorary Co-Chair of The World Games 2022, and will carry the U.S. flag and The World Games flag into the Opening Ceremony.

“This is a huge honor and I’m excited,” said Galloway. “It’s big for the country. It’s going to connect thousands of people and countless communities because Airbus and Team RWB are doing this. It’s building those connections. I think that’s what we need right now.”