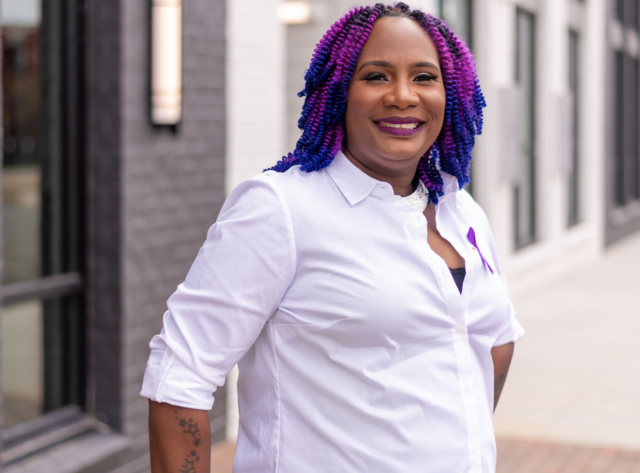 After 36 double-doses of radiation and reconstruction on her left and right breasts, Birmingham native Sandra Calloway-Fields can be described in one word: “survivor.”

“When you face the trials I have gone through, you kind of automatically set that type of attitude up for yourself,” she said. “That’s the only way to get through something.”

For Calloway-Fields, “There’s really no time for negativity,” she said.

At age 38, she first learned she had ovarian cancer. That was in 2012. Nearly a month after ovarian cancer surgery, she found a lump in her breast. Doctors told her it was stage 4 metastatic breast cancer, a cancer in which cells have spread from the breast to other parts of the body.

“Of course, I was shocked, but I was determined to not let this defeat me,” she said. “I have too much to live for, so I knew I wasn’t going to go out like that.”

Radiation treatments affected her hips and she had both replaced, one in 2019 and the other in 2020. That didn’t deter Calloway-Fields, either. In fact, she was inspired.

“When I got home after all of my surgeries, I would stand in the bathroom, look at my scars, and say, ‘God, I’m thankful I’m still standing,’” said Calloway-Fields. “I lost my hair three times, and I’d try on wigs and say, ‘You are so pretty.’”

It’s that kind of attitude that Calloway-Fields tries to instill in everyone she encounters through her volunteer work as the president of the Cancer Awareness Network in Adamsville, a position she has held since 2021. Her organization works to eliminate the fear men and women may have about a cancer diagnosis.

“The key is faith,” she said. “I strongly believe that God responds favorably to those who have faith in Him to do whatever it is that they need Him to do. God is able to do exceedingly abundantly above all that we ask or think, according to the power that works in us.”

Calloway-Fields’s story of endurance led her to write a play, “Colors of Cancer,” which features survivors sharing their stories. The Cancer Awareness Network will present her play on April 10 at the Harbert Center at 4 p.m.; doors open at 3 p.m.

“A lot of times, I have found that most families don’t know what [cancer patients] go through,” said Calloway-Fields, a married mother of two daughters and a grandmother of five. “Some stories, you laugh. Some stories, you cry.”

In 2012, Calloway-Fields remembers going to her doctor for a routine pelvic exam. “I was in there, and I was waiting forever. I kept thinking to myself, ‘What is taking the doctor so long?’ That’s when he came in and told me I needed to get further testing,” which she got the same day, she said.

“I was worried at this time because I was used to my exams always coming back abnormal. … [The doctor] came back and told me I had markers for cancer.”

Two masses, or areas of cancer, were found on her ovaries: one was 7.5 centimeters, and the other was 9.2 centimeters.

“The doctor then told me that the best thing for them to do was just remove that side, which was a partial hysterectomy, [surgery to remove a woman’s uterus, or womb]. … Later, I would actually end up having a full hysterectomy because the stage, [T1A, a tumor that is larger than 1 millimeter but 5 millimeters or smaller], meant the cancer would spread.”

Calloway-Fields, who experienced an accident at a young age, that damaged her uterus, had a lot of decisions to make. “I was remarried at the time, and we were thinking about having kids,” she said. “After a long, important talk, we decided that it would be best for us to divorce because I wanted him to be able to be with someone that could provide him with children.”

A month after the hysterectomy, Calloway-Fields discovered a lump in her breast. It turned out to be stage 4 metastatic breast cancer, where cells have spread from the breast to other parts of the body.

“As I was taking a shower, I kept noticing that I had something on my right breast. It felt like a grape, and it didn’t move. … I kept telling myself, ‘It’s nothing, you know. I’m taking this medicine, it’s nothing.’ I went back for my six-weeks-post-operation checkup and told my doctor, ‘Hey, I feel something on my breast.’”

The doctor performed a breast exam.

“They did an X-ray and a mammogram, and [my doctor said], ‘I think it’s cancer.”

Calloway-Fields called a familiar source in her time of need: her first husband, Peter. “I actually broke down and called my ex-husband. He told me, ‘Hey, you’re not going to fight this by yourself. … You’re stubborn and you think you’ve got it, but I’m going to help you.’ He came back and we actually remarried in 2018,” she said, adding that their first marriage lasted from 2003 until 2017.

Calloway-Fields, 48, grew up on Birmingham’s east side with three brothers. She graduated from Woodlawn High School in 1991.

At age 9, she experienced an accident that damaged her uterus.

“My grandmother made quilts, and my brother would take those quilts and make a fort,” she said. “The way he would get in the fort was through a dresser that was actually made into the wall. He would climb [on top of the dresser], and there was his fort. One day, I climbed behind him.

“When I got to the top there was a large gap from the dresser, [and] I fell and landed on a porcelain prayer hand [sculpture]. … My mom rushed me to Children’s Hospital, and the doctor told her my uterus had shifted [as a result of the fall] and I would need to have a hysterectomy. … Of course, my mother was not going to allow that to happen.”

Instead, Calloway-Fields underwent a surgery to remove as many of the porcelain pieces from her uterus as possible.

“From there, that pushed me to start having menstrual cycles. I also started undergoing pelvic exams every year at the early age of 9. They even told me I probably would not be able to have children,” she said. “I eventually had two beautiful girls—Monique and Jania—in my first marriage, even though I went through miscarriage after miscarriage.”

Calloway-Fields is truly a survivor, having overcome her childhood injury and her bouts with cancer, and she has turned her energy to giving back through her play, “Colors of Cancer,” which is a college scholarship fundraiser for students battling cancer and students with parents who have or have had cancer. The play is also an opportunity to educate people about the different types of cancer and warning signs.

“Cancer is not a death sentence,” said Calloway-Fields, who also wrote about her experience in the 2017 book “Healing by Faith.”

Her advice to those dealing with a health scare: “Let’s check it out and go to the doctor,” she said.

“Colors of Cancer” will be presented on April 10 at the Harbert Center at 4 p.m.; doors open at 3 p.m. Visit the Cancer Awareness Network’s Facebook page to learn more about the play, and visit www.cancerawarenessnetwork.com for more information about the organization.