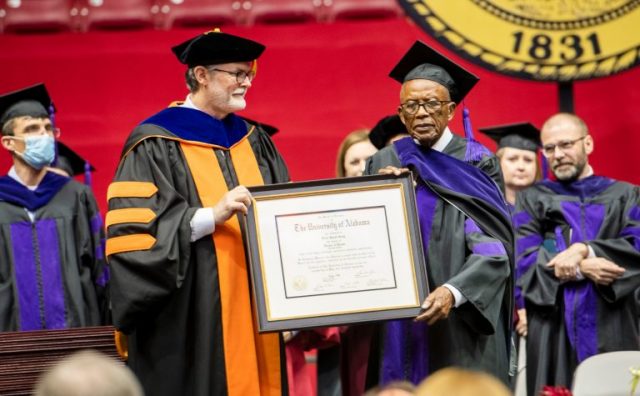 TUSCALOOSA, Ala. – The University of Alabama presented civil rights pioneer and attorney Fred David Gray with an Honorary Doctor of Laws Degree during the School of Law commencement ceremony May 8.

As one of the most prolific civil rights lawyers in the history of Alabama and the United States, Gray successfully represented Vivian Malone and James Hood in their quest to enroll at UA in 1963, playing an indispensable role in the legal desegregation of public education not only in Alabama, but throughout the United States.

Among the many others whom he represented during his career were plaintiffs in the Montgomery Bus Boycott, Dr. Martin Luther King Jr., participants in the Selma March, and the participants and families in the Tuskegee Syphilis Study class-action lawsuit.

“I am honored, appreciative and humbled that The University of Alabama has conferred upon me today an Honorary Doctor of Laws Degree,” said Gray. “When I was growing up as a youngster in Montgomery, Alabama, the cradle of the confederacy, I knew little about The University of Alabama except it was a university for white people and African Americans were not permitted to attend.

“It has special meaning to me because when I filed the case of Vivian Malone vs. The University of Alabama, I never dreamed that 59 years later it would be honoring me as it is today. My only concern was opening the doors so African Americans could attend.”

Despite being an Alabama native and holding true to a lifelong commitment to civil rights efforts in Alabama and in the South, Gray earned his Juris Doctorate from Case Western Reserve University School of Law in Cleveland, Ohio, because there was no law school in the state of Alabama at the time — including UA — that would accept African American students.

“We are honored to commemorate Mr. Gray’s direct role in desegregating The University of Alabama and ushering in a new era for our law school,” said Mark E. Brandon, dean of the UA School of Law. “The significance of presenting this honorary degree to Mr. Gray today is amplified because this ceremony marks the 50th anniversary since Michael Figures, Booker Forte Jr. and Ronald E. Jackson became the first African American students to graduate from The University of Alabama School of Law.”

Gray was born in Montgomery in 1930. As a student at Alabama State University, he vowed to “destroy everything segregated [he] could find.” Upon graduating from Case Western Reserve University School of Law, Gray returned to Montgomery and worked as a preacher in the Churches of Christ and as a lawyer. He later served in the political arena and was one of the first two African American candidates elected to the Alabama Legislature since Reconstruction.

Gray has received numerous honors over the years and has held prominent leadership roles. From 1985 to 1986, he served as president of the National Bar Association. Gray was elected the first African American president of the Alabama State Bar in 2002. In 2006, he was honored with the William Robert Ming Advocacy Award by the NAACP.

Gray is author of the books “Bus Ride to Justice: The Life and Works of Fred Gray” and “The Tuskegee Syphilis Study: An Insiders’ Account of the Shocking Medical Experiment Conducted by Government Doctors Against African American Men.” He is also coauthor of a new book “Alabama v. King” which will be available later this month.

For 150 years, the UA School of Law has produced attorneys who become leaders locally, nationally and globally. Alabama Law provides a top-rate education that results in enviable bar passage and employment rates, all within a supportive and diverse environment. Its low student-to-faculty ratio paired with robust curricular offerings draws students to study under faculty who are skilled teachers as well as leading researchers and scholars.