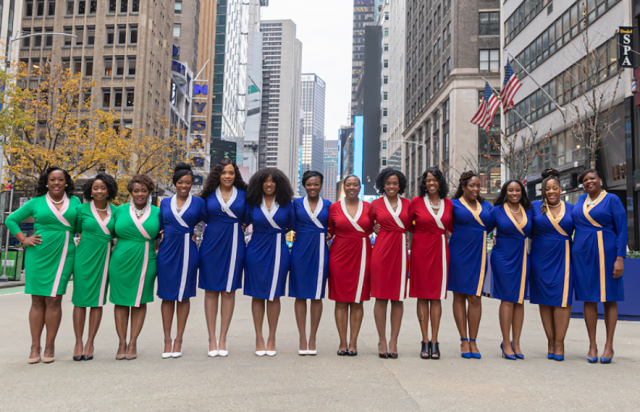 Major clothing retailer Macy’s has struck gold with their newest collaboration with clothing designer Kasper Group. Inspired by sororities of the historic National Pan-Hellenic Council, lovingly referred to as the Divine Nine, Macy’s has unveiled a collection with their respective organization’s colors.

As reported by Bloomberg, this latest line was inspired by WyQuasia King-Thomas, who is a director and buyer of day dresses at Macy’s. A member of Zeta Phi Beta Sorority, Inc., King-Thomas expressed her dismay over being unable to find outfits for her sorority’s events and conferences. “We come in a variety of shape, sizes, curves and I understand the challenges we face when shopping. I know the need and the importance of this dress collection,” said King-Thomas.

Historically Black sorority’s comprise a significant part of the Black community’s buying power and this new collection positively taps into their needs and further’s Macy’s mission to become more diverse. Sororities included in the Divine Nine include Alpha Kappa Alpha Sorority, Delta Sigma Theta Sorority, Zeta Phi Beta Sorority, and Sigma Gamma Rho Sorority,. which were respectively founded in 1908, 1913, 1920 and 1922. Since their founding, they have maintained their missions to protect the varying interests of Black women globally across college campuses and beyond.

Macy’s expects this business to hit $10 million in sales this year, Chief Executive Officer Jeff Gennette said in a recent interview. While that’s tiny compared to the $25 billion in revenue America’s largest department store chain generated last year, it’s helping it connect with middle-aged women — a core demographic for the retailer. Zeta Phi Beta says it has more than 125,000 members.

The collection is available online and in more than 200 of the company’s roughly 500 Macy’s locations. The sororities (Zeta Phi Beta, Alpha Kappa Alpha, Delta Sigma Theta and Sigma Gamma Rho) will have at least five pieces per launch and women’s suits will debut next month. The retailer is also donating $1 million to the education and research foundations of the sororities.

This strategy comes as Macy’s aims to bolster its racial diversity within the highest ranks of the organization and carry more items from Black-owned brands.

“We come in a variety of shape, sizes, curves and I understand the challenges we face when shopping,” King-Thomas said during a video interview, while wearing a royal blue and white dress from the line. “I know the need and the importance of this dress collection.”

Macy’s is not alone in offering more collections aimed at Black consumers. In March, Ralph Lauren debuted a collection with Morehouse College and Spelman College, two of the most recognizable historically Black schools, that included tailored suits, dresses and footwear. Retailers Target and Nordstrom are carrying more clothing from Black designers.

A lot of the momentum around catering more to Black shoppers and brands came after the Black Lives Matter movement gained more attention in 2020, and corporate America responding by trying to reckon with its lack of diversity. But there is also a legitimate business case.

Black Americans account for about 13 percent of the population, but just 10 percent of U.S. consumer spending, according to McKinsey & Co. That has created “significant opportunities” amounting to $300 billion annually, the consultancy said in a 2021 report.

Macy’s is still managing the shift to the e-commerce era and the increased competition that created. That’s why finding new markets, even niche ones like this, will help it survive, according to Shawn Grain Carter, a professor of management at the Fashion Institute of Technology who worked at Macy’s earlier in her career.

Michele Dorsey, a member of Alpha Kappa Alpha and self-declared bargain shopper, estimated that she spends about $200 a month on clothes that match her sorority’s salmon pink and apple green hues. But the 54-year-old from Tampa, Florida, has had trouble finding good options. For some events, members want to all wear the same dress, which can be difficult to source from the small vendors. The new line from Macy’s allows them to be quasi-uniformed, she said.

“I have a dependable place,” Dorsey said. “I can’t believe it wasn’t done before.”

www.bloomberg.com contributed to this report