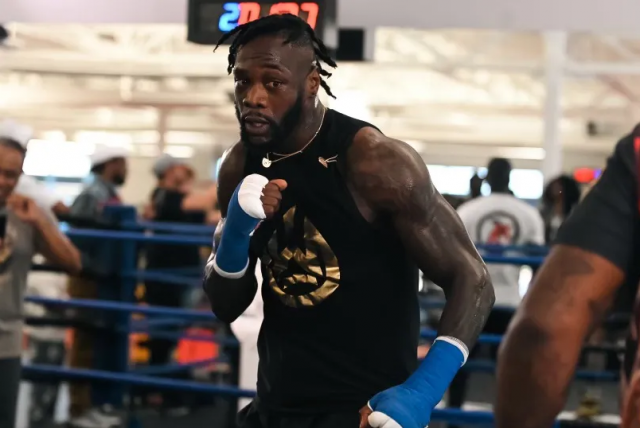 When former heavyweight boxing champion Deontay Wilder eventually looks back on Phase 2 of his fighting career, he expects he will have followed the mantra of Frank Sinatra.

“Even in my first reign, a lot of it was my way,” the Tuscaloosa native said. “But this right here is totally 100% Deontay Wilder’s way. I’m in a different position right now. And it just feels great to be in the position I’m in with no pressure. I don’t need the business anymore. When I do it, I do it for my own personal reasons. I’m doing it for the people and I’m doing it for some hardware, some titles.”

So Wilder, whose reign as World Boxing Council (WBC) champion came to an end with back-to-back losses to Tyson “The Gypsy King” Fury in 2020 and 2021, has his sights on reclaiming the crown.

The Bronze Bomber is making his long-awaited return to the ring with a bout against top-rated Robert “The Nordic Nightmare” Helenius in a WBC Heavyweight Title Eliminator on Saturday, Oct. 15. The fight tops a Fox Sports PBC pay-per-view from Barclays Center in Brooklyn.

The telecast begins at 8 p.m. and will see Wilder look to make his first step toward becoming a two-time heavyweight champion with a victory over the hard-hitting Helenius.

Wilder’s first title reign saw him rack up 10 consecutive successful defenses and a staggering 91.1% knockout rate. Those stats combine to make him one of the biggest stars in the sport.

“We’ve been doing 30 or 40 rounds nonstop,” he said. “Only time I get water is during the break. I’ve just been doing things like that to challenge myself, doing things that have never been done before, or that you don’t really do in boxing.

“I wanted to see how my body adjusts to the long length of time without a break. When you can go a long time without taking a break, you’re in shape.”

The former champion thinks he’ll need that kind of stamina against Helenius.

“I always want a good matchup,” he said. “Robert has been on a winning streak and he’s here. I’ve been hearing he’s supposed to be the mandatory for (Oleksandr) Usyk and however that’s laid out, but I know he’s coming with his A+++ game. They always do when they fight me.”

And Usyk could be ringside on Oct. 15 looking for a possible showdown.

“For Usyk to be able to bless me with a title shot when I’ve blessed so many during my reign, it’s a great feeling,” the former champion said. “We’re going to get past Oct. 15, and then after that we can see what happens. I’ve got a lot of things lined up, a lot of options in the works for me. … But when it’s dealing with a title shot, you’ve got to jump on it when the opportunity presents itself.”

Wilder has 42 wins, two losses and a draw, while Helenius is 31-3. For these boxers, it is a high-stakes fight in which each is facing a major title contender.

“With Robert, I think he’s gotten even more confident because he’s been sparring with me for many, many years,” Wilder continued. “We kind of know each other. At this point in camp, we’re trying to do some things that he’s never seen before. I’m sure he’s trying to do some things that I’ve never seen before. And the one thing I like about Robert is that he has a warrior’s heart, just like me.”

Tickets for the event, which is promoted by BombZquad Promotions and TGB Promotions, can be purchased through  seatgeek.com  and  barclayscenter.com.

Tickets are also available for purchase in-person at the American Express Box Office at Barclays Center.