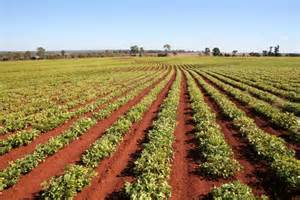 Farmers Try to Catch Up on Planting During Dry Days
Alabama farmers are taking advantage of dry weather to catch up on field work, but they are still behind the five-year average for planting corn.
As of Sunday, April 19, farmers across the state had only planted 31 percent of the planned corn crop, according to the U.S. Department of Agriculture’s Weekly Crop Progress and Condition Report. Usually, 66 percent of the corn crop is planted by this time.
“We were about 85 percent finished planting corn, but then we put the brakes on what we had left,” said Andy Wendland, who farms in Autauga County. “The ground was just so wet. We were prepared to switch over to cotton immediately to replace those last few corn acres.”
Wendland is chairman of the Alabama Farmers Federation State Wheat and Feed Grains Committee and Autauga County Farmers Federation president. Like many Alabama farmers, he planned to plant less corn this year. Total corn acreage is expected to be down 10 percent in Alabama.
“We started planting cotton yesterday, and we’re making some pretty good progress with the dry weather,” he said. “We are still way behind on nutrient application. We just haven’t had the opportunity to get in the field, and we have neighbors who are in the same position.”
Wet weather also delayed field preparations for soybean, cotton and peanut farmers.
“At this point, we’re probably two to three weeks behind on getting things ready for planting,” said Colt Clemmons, who farms corn, soybeans and wheat in Lauderdale County. “We can’t get anything to dry out. We’ve prepared land for corn and grain sorghum, but our soybean land still has cover crops growing.”
In winter, some row crop farmers plant cover crops to prevent soil erosion, add nutrients, maintain soil moisture and minimize weed growth. Other seeds are planted over the cover crops in spring.
“Usually we are finished planting corn by April 15, but this year we haven’t started,” said Clemmons, vice president of the Federation State Soybean Committee. “If we don’t have all the corn planted by May 7, we’ll switch that land to soybeans. Our wheat is starting to mature, but it needs more heat and less moisture.”
While sunshine was abundant this week, April rainfall has been above average at every Alabama station that reports to the National Weather Service. Rainfall ranges from three-quarter inches above average in Muscle Shoals to more than eight inches above average in Mobile.
“It’s been really wet, and we’ve gotten lots of rain,” said Andy Thornburg, a Mobile County farmer. “But if it will hold off for a while, we will be OK. A wet spring is definitely better than a dry spring.”
Thornburg raises peanuts and cotton. He said this week’s dry weather allowed him to spread fertilizer but required the use of flotation tires on the spreader truck to avoid getting stuck in the mud. He said he expects to start planting next week.
Ed White, who farms peanuts and cotton in Henry and Dale counties, said few farmers in his area were planting, but he expects that to change if dry weather continues.
“Our planters are sitting on ready, but we’re not really behind yet,” White said. “We normally get started about May 1 and try to get everything planted by the end of May.”
Some corn is up in the southeast area of the state, White said, and some young corn has turned yellow from excess rain. However, a few days of sunshine should have that turned around pretty quick, he said.
Soybean, peanut and cotton planting is on pace for the five-year average in Alabama, according to the USDA report. Winter wheat is slightly behind the five-year average for maturing, but the crop looks promising with 97 percent rated fair or better. Farmers also reported an optimistic outlook for the state’s oat crop.